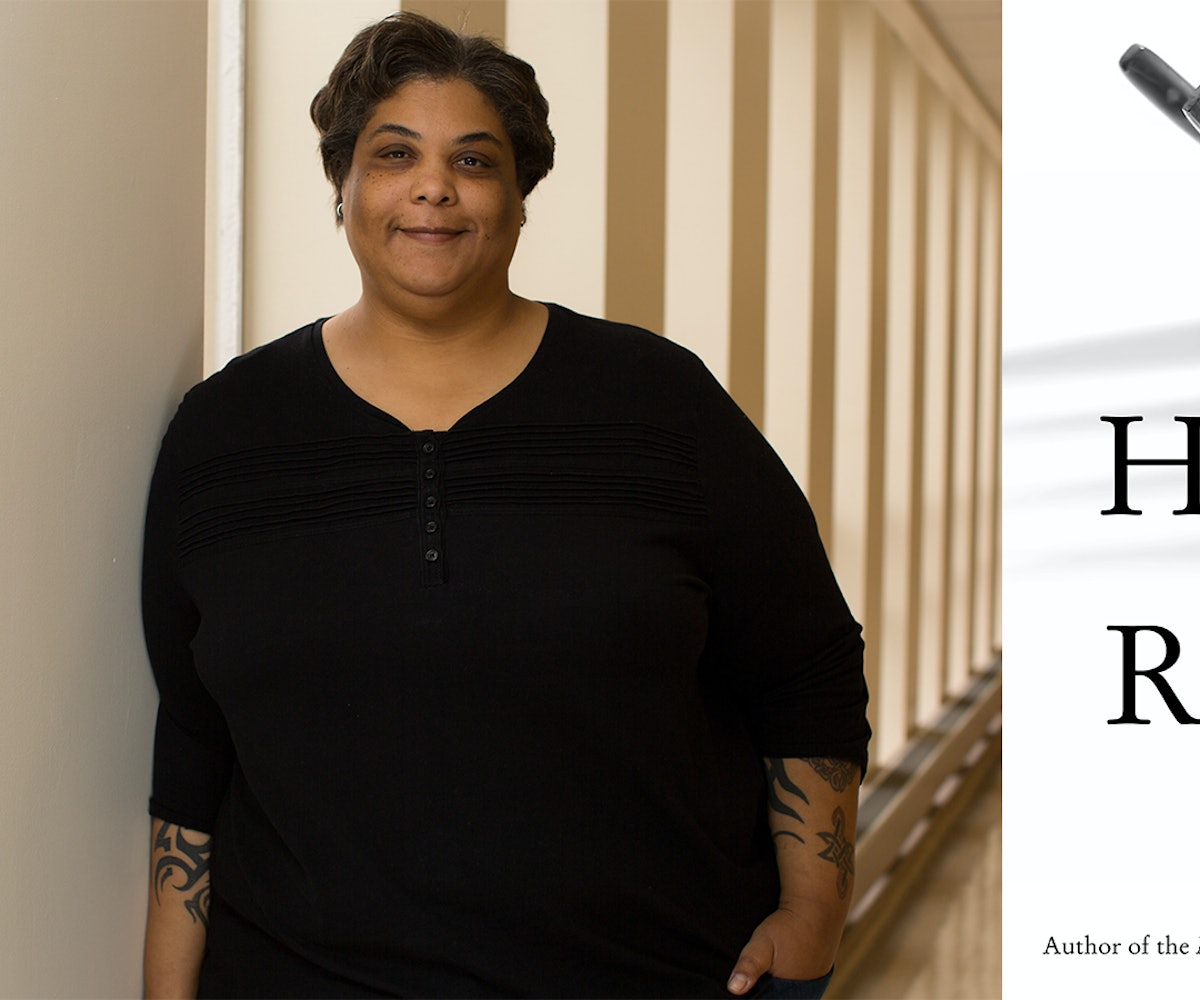 It’s easy to feel like you’re seriously slacking if you compare yourself to Roxane Gay. But then, just about anyone would seem like they're not doing enough compared to the prolific writer. After all, not only has Gay just released Hunger, one of the most profoundly personal and impactful memoirs we’ve ever read, but she also came out with Difficult Women, a collection of short stories, earlier this year. And she has a slew of other publishing projects coming down the pipeline. Plus, she’s a professor at Purdue University. And it's not like Gay doesn't indulge in pop culture: She watches The Bachelorette weekly and writes about it for Marie Claire. And she reads plenty of just-released books, and even reviews them on Goodreads. Oh, and remember when she profiled Madonna a few months ago? Gay also carves out time to engage with both fans and trolls on Twitter, because she clearly finds hours in the day that the rest of us just don't have.

Though, I will say that when I chatted with Gay on the phone about a week ago, I mentioned that I'd noticed how she'd taken a bit of a hiatus from the social media platform—but it wasn't due to a lack of free time. Rather, Gay explains, “I love Twitter, but people can just be really aggravating and really mean, and I don’t have to put up with it every day. Sometimes I’m like, you know what, not today.”

Gay was on Twitter yesterday, though, to voice her disgust with a now-deleted story published by Australian website Mamamia, in which the site's founder spoke about Gay's weight in a way that Gay rightfully called "cruel and humiliating." The post detailed alleged accommodations made for Gay in order for her to visit the Mamamia offices, and served as an "appalling" example of the way in which Gay's size dictates how she's treated in the world. Horrific as the post was, it demonstrates the need for a book like Hunger in the world.

Hunger offers a timeline of Gay’s experience in her body, starting off by portraying what it was like to live in its young, safe iteration up to the moment it was violated. Gay coped by turning inward, dealing with her trauma via outlets like theater, reading, writing, tattoos, the internet, and food. It’s her relationship with the latter that forms the foundation of the narrative, but the definition of “hunger” also extends far beyond physical appetites into deeper yearnings. The truths Gay writes about in her book aren’t easy to digest, but they’re necessary if we ever want to get to a place of understanding regarding the realities of bodies both other than and including our own.

Ahead, we chat with the author about her relationship with nonfiction, The Bachelorette, and the thing she’s hungering for most in life right now.

Hunger addresses very serious, non-lighthearted topics. How did you decide what to include and what not to include?

At what point in your career did you feel comfortable getting intimate in your work, and sharing your life with the public?

I don’t know that I’ve ever been comfortable with it. I generally write and tell myself, "Oh, don’t worry, no one is gonna read it," and that is what allows me to do it. Without that, I wouldn’t have the courage to write.

You once said you’re a fiction writer first. What, if anything, about the nonfiction genre, turns you off?

It doesn’t turn me off, it’s just that I started off writing fiction first, that’s all. So, generally, your first love as a writer is the one that you gravitate toward more, and I’m relatively new to nonfiction and less confident in my nonfiction and, therefore, it’s just a bit more of a challenge.

What made you want to explore the nonfiction space now?

I had written a couple essays in my 20s, nothing serious. But in 2009, a young girl in Cleveland, Texas, was gang raped and The New York Times published an article, and they were like, "Oh, the poor town, the poor town is reeling from this crime." And I thought, I bet you the girl is reeling. I was just so offended by the tone of the article that I wrote a piece for The Rumpus in about two hours. I wrote it in a fury, and I was like, "This is so careless, this way you’re talking about sexual violence, and, not only that, sexual violence involving a child and 28 men." There are crimes and there are just crimes, and this was just horrific. I had to say something, and I realized, after writing that essay, I got more invitations to write nonfiction. I guess I have a lot of opinions that I’m willing to share.

Fiction, for most, serves as a means of escape from the happenings of the world. What good do you think nonfiction serves in a time like this?

I think both fiction and nonfiction have a lot to offer. Fiction isn’t always necessarily an escape; sometimes fiction is a reflection of the world that we’re living in. But nonfiction allows people with different perspectives to share how they’re experiencing the world because it’s important to recognize that we’re not all experiencing this world in the same way, and I’ve thought about that quite a lot since the election, because we’re in a political moment, but we’re not all having the same moment. And the moment shifts with each shift in identity that you have across different people, and nonfiction allows for the articulation of that.

You're a Bachelorette fan. What are your thoughts on the season?

I’m enjoying this season, I like Rachael as much as one would like a stranger on a television show and I think she's the light bulb. This season is interesting for many reasons, not the least of which is she is the first black bachelorette which I think is awesome, but this is an odd group of guys, and she has already said that she found love, so I’m really curious as to which one of these idiots she ended up with.

I’m always interested in what authors listen to when they write. Was there music that soundtracked this particular book, or is there a playlist on hand that you gravitate to when you write?

I generally write to the television. Generally, I’m watching some procedural drama, most likely Law and Order: SVU or Criminal Intent.

Do you get distracted?

No, not at all, because I’ve seen every episode, so it’s just like background sounds. If I listen to music, I listen to classical music or soundtracks. I don’t watch the show, but the Game of Thrones soundtrack is really good. As long as there's a lot of instrumental work, it works nicely. But mostly I watch TV.

You’re very active on Goodreads, and often write reviews of other author’s books. What draws you to that app, and do you ever read reviews of your books?

Never, that is one of the only rules I stick to. The reviews are for readers, not for writers, and so it is not for me to go to Goodreads and to harsh on someone who has an opinion on about my book. And also, I don’t need to get my feelings hurt, that is not necessary. That’s for readers. And that’s why I use Goodreads, and when a writer is like, "I can’t believe you didn’t give so and so’s book a five," I’m like, "I didn’t write a review for them, I wrote my opinion as a reader." And if I really hate a book I just won’t post about it.

I don’t know how you find the time.

I make the time, I love reading. It’s a relaxation thing for me.

You make time for the things you care about.

Yes, definitely. And also, I don’t have kids, so that frees up so much time.

A recurring theme in the book is that hunger is more than an appetite, is there anything that you’re hungering for in life now to do, to experience?

Are you gonna get any after this book tour?

Honestly, the first time off I’m probably gonna have is in spring of 2018. Actually, that’s a lie, summer 2018. So I’m definitely going to try and plan now and block out some time and plan an actual vacation.

You've talked openly about how hard it was for you to write Hunger. When you did finish, what did you feel like writing it had given you?

It gave me a lot of insight into the history of my body thus far, and it allowed me to be a lot kinder to myself because, as I wrote this, I realized, "My goodness, my body has really been through it, and maybe I should be kinder to my body and to myself." It really forced me to take a hard look at some of the protective mechanisms that I’ve had in place for a very long time and that turned out to be more useful than I expected.

Hunger is available for purchase now