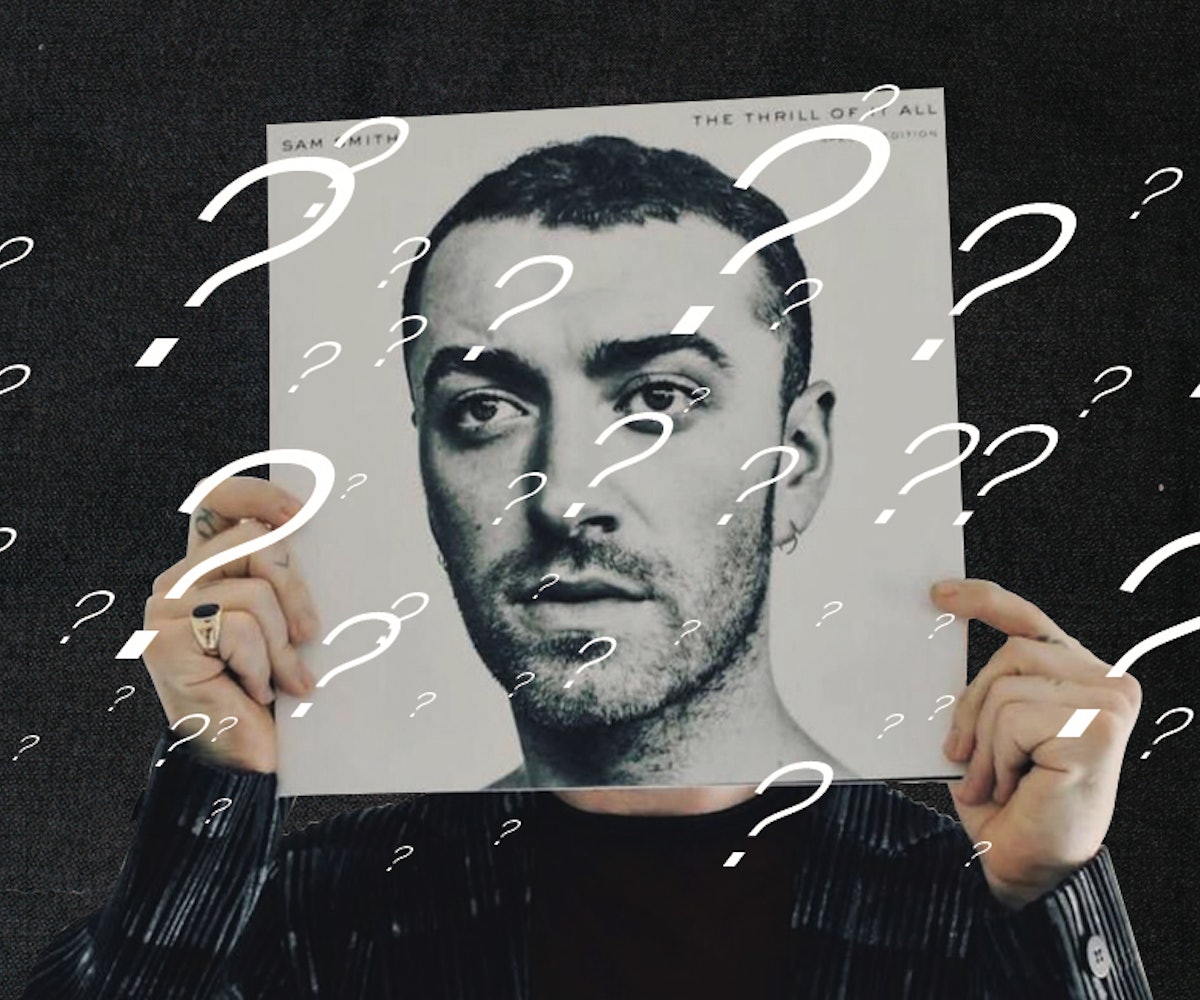 Sam Smith is not the kind of artist who has distinctive eras. In the span of three years and two proper LPs, the most reinvention Smith has done is lose weight. There were those two tracks with Disclosure that are now considered modern-day classics; the songs he wrote with Mary J. Blige for her 2014 album, The London Sessions, were also a welcomed flex of writing talent. He's an anomaly among his peers; he doesn't push buttons—or at least not intentionally. That's why Smith attributes his most controversial moment, that now infamous Oscars speech, to a hip flask of tequila.

Smith, then, stays in his lane, safe with his piano and feelings. Which is why it's more than a little ironic that his sophomore album is called The Thrill of It All—the most thrilling thing about it has been the buildup and hype that surrounded its release.

Let's not get it twisted: The Thrill Of It All is a fine album. It sounds nice, and Smith's vocals are as honeyed as ever. Perhaps it was a bit too ambitious to hope for a disco-leaning album from him, or any direction other than anguished piano ballads peppered with the occasional chorus. Up until 25, Adele more or less operated on the same formula. Her charisma carries her album cycles and tour schedule, lightening the heartbroken mood often associated with her music. And just as Smith's first album was rife with heartbreak, so, too, is his second album, though it also has a little bit more social commentary thrown in, paired with a welcomed use of he/him pronouns that align with Smith's homosexuality. It's not growth in the Gaga sense—Smith isn't dyeing his hair, changing his aesthetic, or pushing his sound in new directions. Rather, it's more revealing of personal growth, a new state of being translated through in his lyrics. The music, outside of his vocals, comes second.

Which, okay, is a novel thing to do. Plenty of Smith's peers have tried the whole sound switcheroo and been negatively critiqued for it—or, in Ed Sheeran's case, slapped with a lawsuit. (Smith, too, has been accused of plagiarizing Tom Petty.) That Smith would eschew these type of shifts is more of a testament to his artistry than an indication that he is—as some consider him to be—boring. Smith has many things working for him: He's talented, charming, and damn consistent. It's the last quality that is, perhaps, the most thrilling thing about him.

There's no element of surprise when you hit play on the new record. You know what you're getting yourself into and will be left more or less satisfied with it. He doesn't court the type of stan fanfare that undoubtedly influences today's biggest pop stars and puts unjust expectations on them to create the same magic their previous hit single did. Smith already has his foundation and his tools needed to create his sound—all he has to do is go live a little and gain some more experience to write another album that will, yes, most likely feel similar to his others but satisfy nonetheless. That's pretty damn refreshing and really, a mark of brilliance because it shows longevity. Smith's career is still young. The thrill of it all is going to be watching him turn his life experiences, be it heartbreak, new love, or something outside of relationships, into songs that will, like his previous records, stand the test of time.