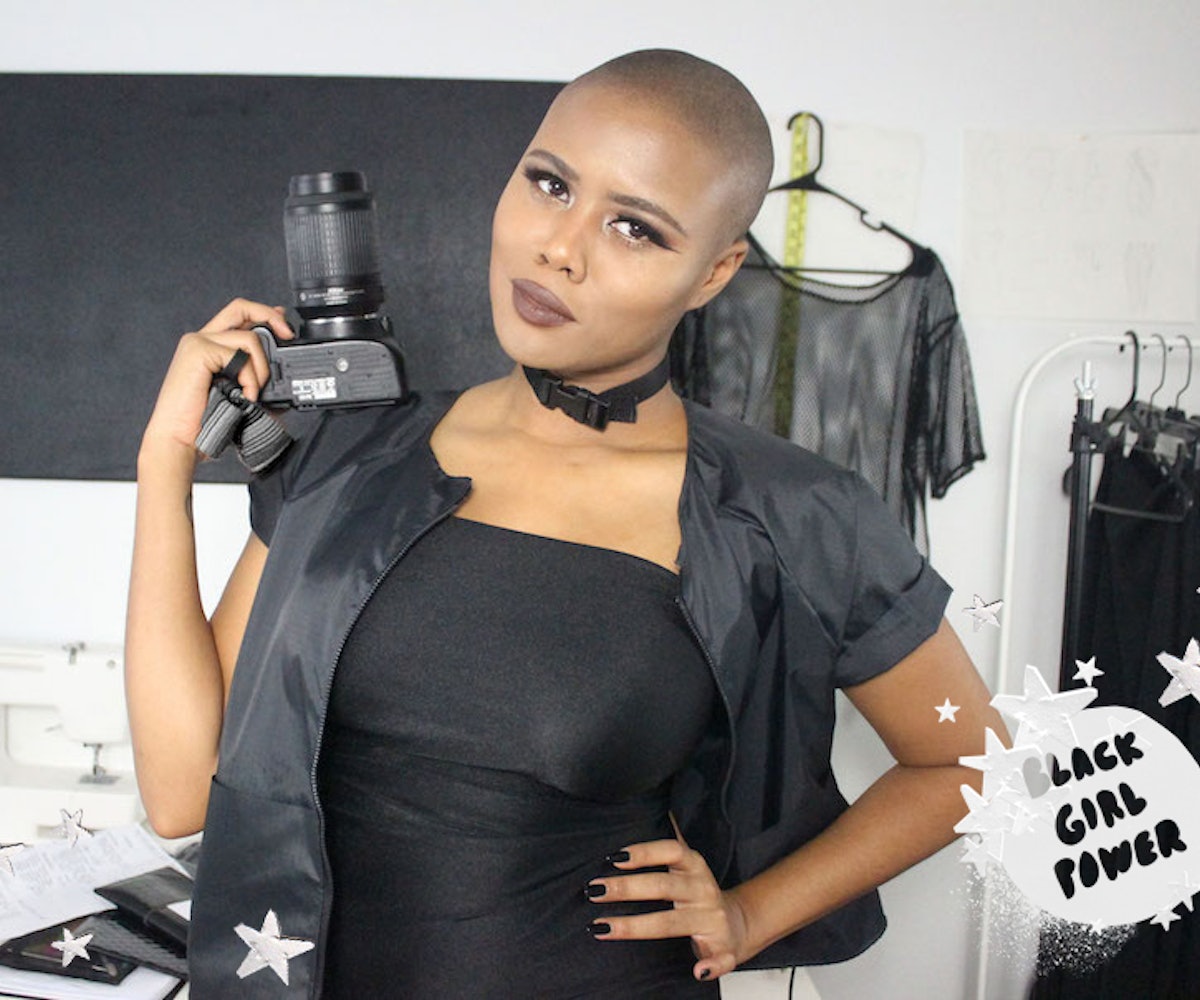 Sarah Nicole François is a 24-year-old post-human and content creator based in Orlando by way of Brooklyn.

(Truth be told she's convinced that she's from Mars though.) She's been

designing for as long as she can remember—"I started from manipulating my clothing as a tween, which graduated to creating dresses from scratch with a sewing machine my mom got me for a birthday," François told us in an email.

With a massive following on Tumblr, François spends a good portion of her time vlogging to the masses and sharing life updates, style guides, beauty routines, career advice, and tons of wisdom on her YouTube channel. (One of my personal favorite videos is when she discusses the struggles of online dating as a black woman.)

François' main line of duty is being in charge of 000SPORTWEAR/// as the owner and designer of the online clothing brand.

carries contemporary sportswear apparel that is gender neutral. François describes the brand's aesthetic as "very utopian, very futuristic and at the same time very minimalistic." These are all important elements that François sees in herself, and every piece channels the sense of power, beauty, and fierceness that she instills.

"For 000SPORTWEAR///, I create from a very personal space. I like to think about my ideal self; What would she look like? What are her values? What would she dress like? That’s really what inspires a lot of the pieces." François said. "I kind of feel like I’m unintentionally playing up on the

Black Girls Are From The Future

concept." (Note that François is referring to

Black Girls Are From The Future.

It goes without saying that François is one of the most badass entrepreneurs on the world wide web. Learn more about how she developed her distinct vision in the interview, below!

How did you conceptualize your brand?

At the time, I just came off of working for Marc Ecko as a content creator and I was sort of in a life limbo. After posting photos of some clothing I was creating and having fun with on my Tumblr, I got a lot of messages about whether I was planning on releasing these things for purchase, which wasn’t in my plan at all. I just thought to myself, this might be the perfect opportunity to start my dream brand! I’ve already got the customers, and these are all people who have been following me for years and identify with me, my politics, and my aesthetic. I’ve had a few brands in my past (none all too successful) but at the time I was conceptualizing 000SPORTWEAR/// and it felt like it was a “now or never” situation. I launched a site and put out my first little marketing campaign and within a few months the brand was born.

Growing up Kelis was my #lifegoals, she was one of the only examples of a “weird” and “carefree” black girl that was accessible to me. She had amazing style, made the coolest music, was powerful, was sexual, and seemed so untouchable. I even cut my hair in a pixie cut like hers in high school when the music video for “Bossy” came out. She just made me feel so empowered and she really inspired me to be experimental with the way I dressed.

These days I’m not short of inspiration. There are so many amazing people that I draw inspiration from: musicians like Solange, Kelela, Kayla of Bleed The Pigs, Barf Troop,  SZA, and Kari Faux to artists, writers, and personalities like Jay Katelansky, Juliana Huxtable, Yagazie Emezi, Kimberly Drew, Hana Riaz, Akwaeke Emezi, Amanlda Stenberg, and more. I honestly could go on and on. A lot of these people I am even blessed to call my friends—they are all creative, empowering people of color who are completely unapologetic about who they are and killing it in their respective fields because of it.

In my personal life, I’m very proud—and on some days even arrogant—about my blackness and I let that inspire the work I create. Part of my brand’s mission is to inspire people of color to allow themselves to feel powerful, to allow themselves to have control over how they look, how they feel, and the outlook they have on their own lives. There are so many social and political factors that attempt to decide and define things for us; define who we are, how we should act, and what we should like. I want to encourage people to challenge that, and continue to challenge that in every aspect of their life.

The clothing I design is a very literal interpretation of that. 000SPORTWEAR/// is very bold and wearing it you feel very confident, even powerful. We all have this power that sort of sits dormant inside of us and I want to help people inspire that part of themselves.

I feel like that every single day! Creating a brand without any type of financial backing or privileged position—essentially creating it from absolutely nothing—I deal with a million challenges a day and every day I solve a problem or achieve something. I'm celebrating little victories. There aren’t very many young black designers so just by choosing to do this, just by existing in this space I feel like I’m assisting in helping break down barriers.

Growing up I was one of those “too white for the black, too black for the white” kids who sort lived in limbo between the two worlds by no fault of my own. I never saw myself as anything other than a black woman, regardless of the fact that I worked at Hot Topic, skateboarded, and went to hardcore shows, I was black and I loved being black, there was really no question about it for me. But the consequence of that kind of surety at that age was having to deal with people attempting to define me because I didn’t fit their idea of what a black girl was supposed to be like. I feel like my adolescent years were a constant fight against that. A lot of the black kids called me an “Oreo” or a “white girl” and to the white kids I was “the black girl” or “the not really '

black girl.” I was never called any of these things in an outright, mean kind of way, and a lot of time it was just jokes but that’s the thing with micro aggressions, they can be so subtle you don’t even realize how harmful they are until its too late.

If you’re told something often enough, you really do start to believe it no matter how sure of yourself you are, so there were plenty of times where I was confused about my identity. I was confused because I never felt like I wanted to be white. I didn’t have a problem with my skin color or my culture so I didn’t really get why was I constantly hearing that implied by everyone around me just because I liked certain things or looked a certain way. The older I got, and the more I studied race relations, and the more people I met that were just like me and dealt with the same things as me, the more I realized that my identity as a black woman was valid and I started to understand what I always believed was absolutely true: I didn’t have to fall into any archetype to be proud black woman. I could be whatever the hell I wanted, do whatever the hell I wanted, and I would always be black. That was a very important moment for me.