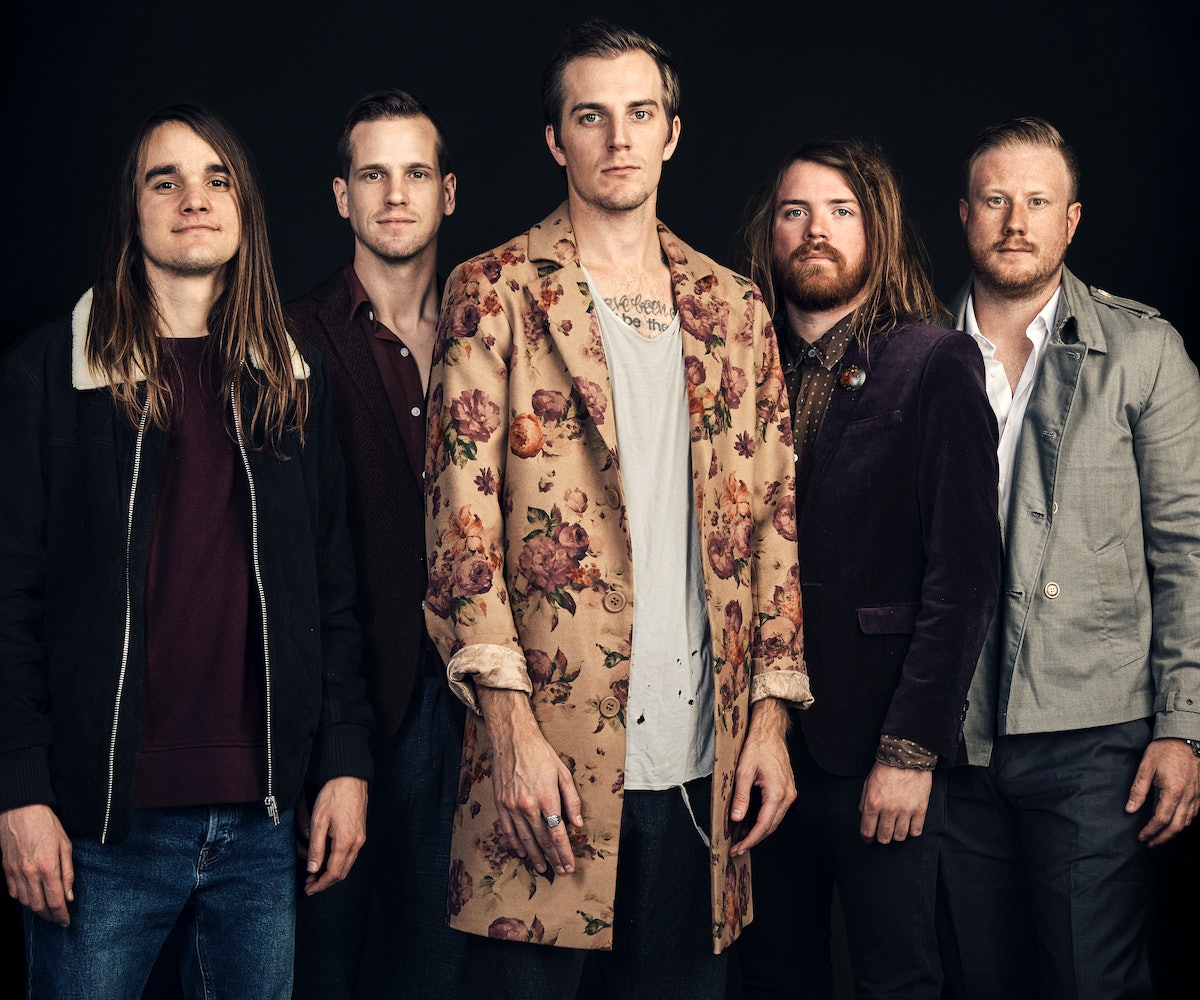 It's no surprise that The Maine has remained a staple amongst alt-rock fans for a decade. As the band recently pointed out in a Medium post, they grew their fan base exponentially "by actually giving a shit." Whether you were a Hot Topic-shopping teen in the crowd of one of their first shows or a newcomer embarking on their upcoming tour, one major thing has stayed the same—you will totally get to meet them after they play.

This is because the Maine has stayed true to the heart and soul of the emo-loving world even as their sound has matured. John O'Callaghan's vocal style transcends the years of crushing on band boys, and Lovely Little Lonely is proof. This new album is sure to have you digging for your old band T-shirts and wide rubber wristbands (except now you know how to style them with something other than super-tight skinny jeans). Familiar guitar tones and upbeat drums are a surefire trigger for nostalgia, but with a fresh new reason to fall in love all over again.

With their latest release, the whole band gave us an intimate look at the stories behind each track on the album. Dive into all that Lovely Little Lonely has to offer, below.

Pat Kirch: This is the first song we all got collectively excited about for the album. From very early on, we knew it would make the record and be the opening track. John went out to Nashville to record demo versions of some songs with our producer Colby and when exporting this song the vocals shifted somehow a half measure behind the beat. It turned out to be a happy accident because it sounded better than how it was written, so they rewrote the chorus to how you hear it on the record. As far as instrumentation goes, the guitar tones for the intro of the song were born out of frustration. We were having a really hard time getting a sound we liked, so we just plugged the guitar right into the preamp and turned it up, and loved how it sounded.

PK: This song was written really late in the process in a rehearsal room we rented in New York City and it just kind of came out of nowhere. It came together really fast late one night, and we loved it instantly. We wanted a song that never let up from beginning to end, and I think that's what we accomplished on this song. I remember when John came up with the vocal melody for the chorus, my first thought was, This song can't be track seven anymore, so we moved it up to the second song.

Garret Nickelsen: We really wanted this record to flow together. Albums that have a certain feeling throughout are some of our favorites, so using things like interludes help bridge the gap in-between songs. This is the shortest on the album because we didn't want to halt the pace too early but we wanted to let the listener know that this would occur a few times during the record, a short vibey tune to connect things together quickly.

GN: This is maybe the fastest song in our catalog, and one of the hardest to write. It took many forms in its life from an R.E.M.-style song early on to even having a reggae feel at one point. Throughout its life, as a song, it has always felt special and important to the album. It could maybe be my favorite on the record.

Jared Monaco: This tune ended up being my favorite on the album. The first demo of this song sounded very similar to "English Girls" from American Candy, with a ton of rhythmic guitars and it was very upbeat. We switched it up and tried featuring piano, and from there, it took on a whole new vibe. We added percussive elements that gave the song a steady sort of driving feel. The structure of this song is what I really love; it has these really big choruses that drop into these little sound beds. Those moments eventually swell into a loud and emotional guitar solo in the bridge. I like songs with big payoffs like that.

JM: This song took one of the most drastic turns in terms of where we started. At first, it was very straight with really stabby guitars. We decided to push everything to the off-beat, and it immediately made the song feel exciting and quick. The bass line was one of my favorite parts of the demo, and it’s one of the only parts that we somewhat kept. My favorite part of this song is the super huge and gross and loud and fuzzy riffage.

Kennedy Brock: For the longest time, we have wanted to make a record where the songs are so cohesive that they transition seamlessly. It was a different writing process for sure. Usually, when you start writing a song, you have no idea where it will end. But when starting with book ends, it's a whole other thing. This track takes me right back to the cliff side outside our studio house, where we threw a microphone over the edge to capture the ocean, bottle it up, and keep it forever. Sitting on the floor through the night, tangled in all my favorite pedals, trying to create something even half as soothing as the waves. I close my eyes listening to this track, and it all feels real again.

"The Sound of Reverie"

KB: The working title on this one was "Doodoomae." That's the kind of title you get when all of the demo vocals have no real words in them. Side note, Doo doo has been a working title on three separate records. This song was a difficult one to make—easy to envision, hard to construct. The initial demo was a bit too bubbly for us and needed a darker feel to it. Easier said than done. We spent two full working days in the studio to complete it; in our timeline, that's a snail's pace. The challenge was that we had essentially already created the song but needed to put a different vibe on top. In the end that was achieved by arranging the guitars in some unconventional tunings. Three different ones, to be exact. This song is going to be a nightmare for the string section on tour, but it had to be done, and we'll be better for it.

John O'Callaghan: This tune was one of the first things we put together in pre-production with Colby, only to be swept under the rug and forgotten about until my final trip to Tennessee. No one knows this, but we had initially recorded music for a song that I ended up wanting to scrap upon hearing the other tunes, and subsequently felt like this track fit in far better than the other. I wrote the melody and lyric in 20 minutes or so and recorded the vocal just before my flight back home to Phoenix. It didn’t take much convincing getting the rest of the guys on board, and, in retrospect, I still stand behind the decision to part with the alternate track.

"I Only Wanna Talk To You"

JO: If it weren’t for the vision of some of the guys this track would not have made its way onto the album. Sometimes you get so wrapped up in your own bias that you fall blind—or deaf—to the potential of a tune. Obviously, there is a heavy '90s influence on this track, and we felt like the best way to emphasize the sound was to track two simultaneous drum patterns that go throughout the song just like in Oasis’ “Wonderwall.” This one captures the sound I heard when first coming up with the album name: spaced out and fragile.

JO: If there were a mission statement for the record lyrically, this would be it. The track itself came about sort of serendipitously. I feel as though that same intervention happened all over the record, but this tune sort of wrote itself in a rather strange way. Without getting too long-winded, the key of a demo from ages ago ended up matching the key of "I Only Wanna Talk To You," and accidentally hitting play too early sparked the inspiration for having the two songs flow into one another. I hope that for the listener, this is the aha moment on the album.

JO: If you’re at all familiar with any of the closing tracks on most of earlier albums, you’ll notice that we have a tendency to go for the more anthemic and drawn-out vibe to wrap up records. On LLL, we wanted to deviate from that tendency and close with something up. My hope is that "Feel" leaves the listener with an open-ended question of introspection and reflection. This song opens with my most Morrissey moment to date: “Dearly depressed, and broken-hearted, I’d like to let you know that boys cry too.” Sorry, Robert Smith, I beg to differ.