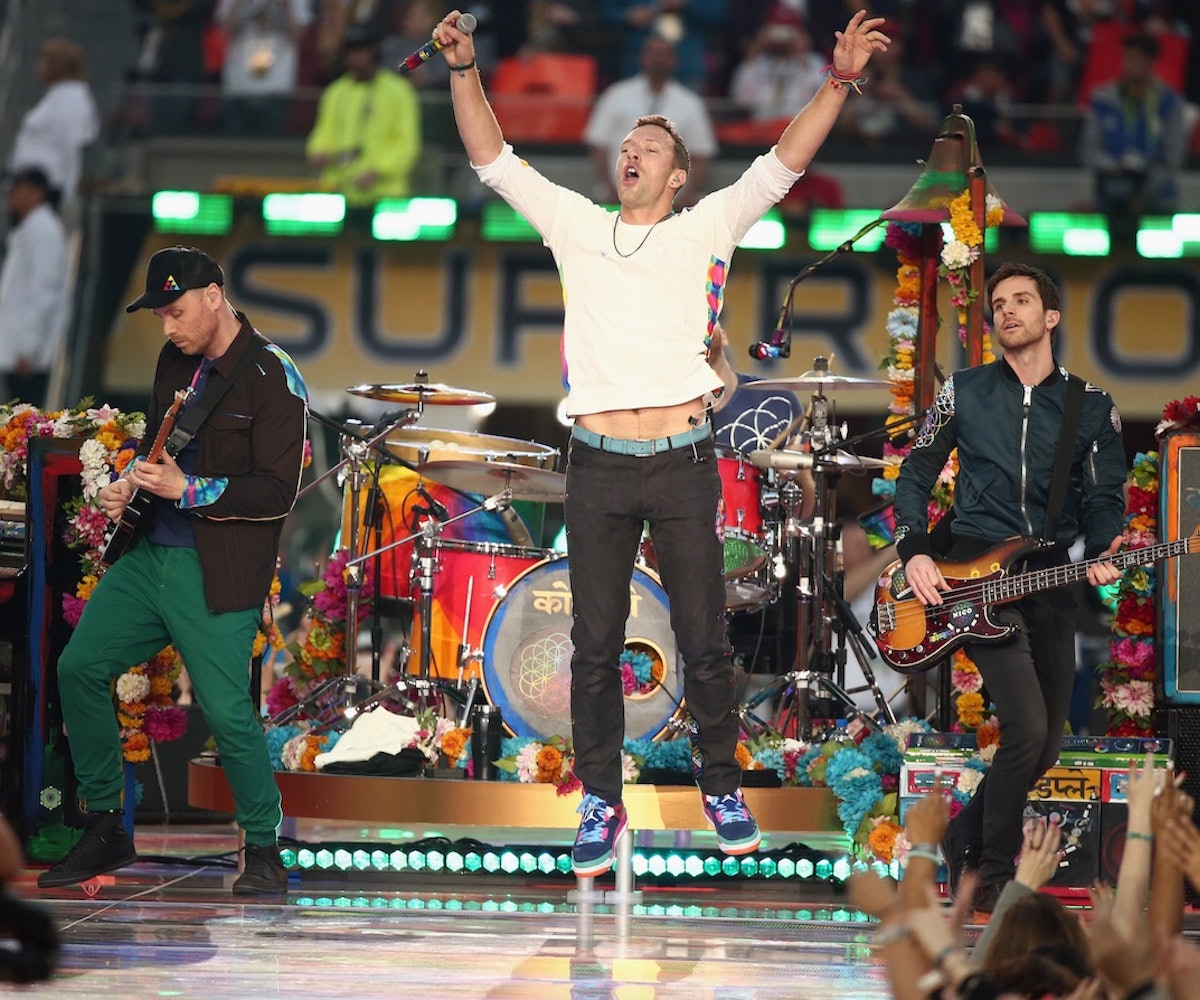 Besides formally announcing that 2016 is the year of Beyoncé, the Super Bowl halftime show marked Coldplay's official designation as a pop cultural punching bag. The criticism and insults lobbed at the band for their admittedly corny performance were widespread, and pointed to a staggering turnaround for a band that used to be a beloved critical darling with genuine cool cred. What happened?

Back in 2005, Coldplay was everything. To us, their music was beautiful, tear-inducing, and heartbreaking, and what Parachutes and A Rush of Blood to the Head didn’t give us, 2005’s X&Y did. Songs like “Fix You” made us all feel like we were living in a teen soap (and not only because that particular song played when Caleb died on The OC), while “Speed of Sound” married drama and vulnerability, encouraging us to feel our feelings while Chris Martin articulated them.

And then things began to shift. By the time Viva la Vida or Death and All His Friends came out in 2008, our artistic tastes began to change. Thanks to the popularity of sites like MySpace (never forget), smaller, riskier indie bands began populating our iPods, and as Chris Martin’s star positioned itself permanently on the A-list, it became harder to imagine him as one of us; as a man who could feel what we on the outside were trying to articulate. Coldplay was no longer for the people, and they became safe.

It didn't help that risk became currency. Mylo Xyloto—released in 2011—fell among pop offerings by Rihanna, Lady Gaga, Adele, and Drake, as well as albums like Watch the Throne and Pink Friday, which made pop music for anyone ready to stifle their vulnerability with rhythmic excess after years of over-emoting. (2011 also delivered artists like Bon Iver who felt feelings so much more subtly than Coldplay ever did.) So, by the time Ghost Stories hit shelves in 2014, Coldplay was dead to us. Not because they did anything wrong, but because they represented what we loved before we knew better; before Drake became the softboy posterchild, and before Beyoncé dropped her self-titled masterpiece that allowed us to acknowledge our feelings as well as our strengths.

Coldplay had become safe dad music: easy to listen to, waiting room-friendly, but still part of the A-list stratosphere. Even Chris Martin’s divorce from Gwyneth Paltrow was tidy and mature (which is great for them, don’t get me wrong). The problem is, the 2010s call for more: flaws, messiness, and the acknowledgement of both of those things. In an era of Twitter rants, “Miley, what’s good?” and Taylor Swift BFF-ism, humanness has become a currency. It wasn’t—and isn’t—enough to hop on stage, sing your songs, and offer only that. And the Super Bowl made that painfully obvious.

I mean, it’s not that Coldplay was incompetent or bad—they were fine. But “fine” isn’t enough, especially when compared to Beyoncé’s “Formation” battle cry, and her dance-off with Bruno Mars. To appear alongside both artists on stage served only to highlight Coldplay’s normality; to draw attention to the overt safeness of a band we once felt so strongly for, which then reminds us of who we used to be. Ultimately, Coldplay has become the musical equivalent of a friend we had in high school: okay, I guess, but someone you don’t have anything in common with anymore.

And of course, that’s not to say they’re the enemy or that they stand for anything in music other than doing their own thing. In truth, our issues with our past selves have nothing to do with the music made by Chris Martin and the rest of the band, especially since our aversion to Coldplay lies in our current disinterest in them and our embarrassment that we used to like them. We liked them before we “knew better,” we tell ourselves, so we can’t like them anymore.

At least that’s what I think explains our knee-jerk reaction in response to even hearing their name. Truthfully, we know there are far more offensive artists peppering the pop charts and cultural landscapes (and by “offensive” I do mean “boring”), but because we don’t attach them to our own emotional evolutions or the emotional stagnation of those who still love them, it’s easy for us to look the other way without registering who they are. (Here’s looking at you, Charlie Puth.) Coldplay’s fault lies mostly that they came along at a time before we knew the full capacity of what music and pop stardom could be in the Internet age, and they hit us square in the hearts before we could understand how to articulate emotions in different, more interesting ways.

Otherwise, they’d just be a band we used to love, and one who might even have garnered a comeback by now, like Fallout Boy or Panic! At the Disco, who helped usher in a new era of rock and/or roll. Instead, they’re the old guard, reminding us of the earnestness that once dictated our lives before social media did.