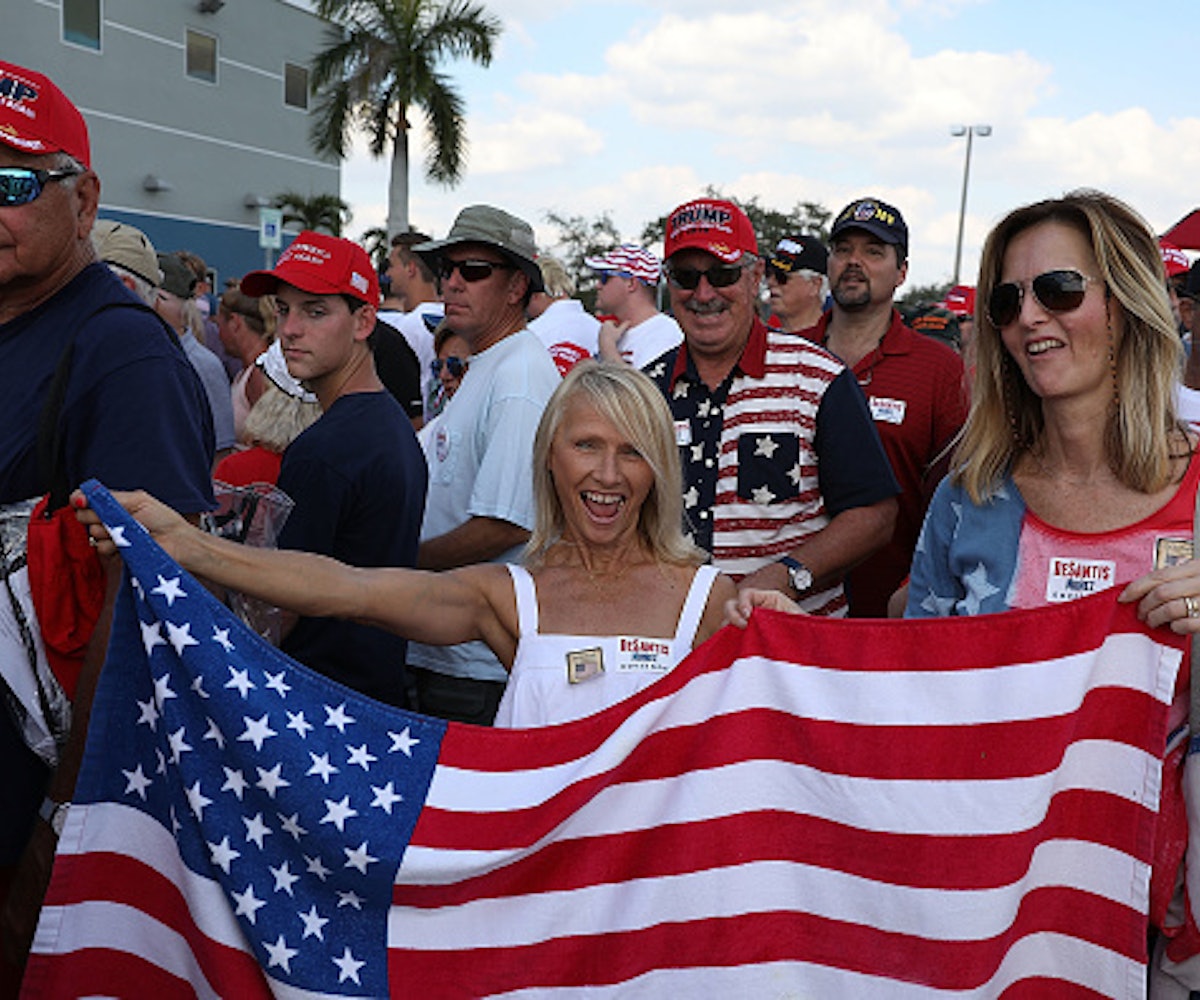 Last night's midterm elections had many powerful and inspiring moments. Democrats now have resounding control of the House of Representatives—a fact that has Donald Trump apoplectic with fear at the potential for investigations into his corruption. And, Floridians voted for an amendment that would restore voting rights to people previously convicted of felonies, who had finished serving their sentences. With that amendment's passage, over one million people were granted the right to vote.

Then also, last night was a huge night for women congressional candidates, with more than 30 new women elected to Congress. Of particular note are the women of color, including progressive candidates like Alexandria Ocasio-Cortez of New York and Ayanna Pressley of Massachusetts. The first Muslim woman was elected to Congress, and then quickly followed by the second Muslim woman's election, with the victories of Rashida Tlaib of Michigan and Ilhan Omar of Minnesota. Plus, Veronica Escobar and Sylvia Garcia became the first Latina women elected to Congress from Texas, and Deb Haaland of New Mexico and Sharice Davids of Kansas will be the first Native American women to serve in the House.

And this is to say nothing of the fact that Democrats flipped seven gubernatorial seats, kicking out Republican horror-shows like Wisconsin's Scott Walker, and defeating Trump-endorsed troglodytes like Kansas' Kris Kobach. And, with the election of Jared Polis in Colorado, America now has its first openly gay male governor.

But that doesn't mean that there weren't a lot of low moments. Republicans further solidified their control of the Senate, including with a devastatingly close race in Texas between Ted Cruz and Beto O'Rourke. And two closely contested governor's races seem to have ended with Republican victories, with Ron DeSantis narrowly defeating Andrew Gillum in Florida, and Brian Kemp maintaining a slim lead over Stacey Abrams in Georgia (Abrams has rightly not yet conceded, hoping for a runoff in early December). These three races were all closely watched, as they all featured truly progressive Democratic candidates who were running for traditionally Republican seats in states that had all strongly backed Trump in 2016. That the outcomes were so close is actually a solid validation of the fact that many voters were drawn to the polls, who had felt disillusioned in 2016, and wanted to put a stop to the policies of the Trump administration.

And yet, what also became clear, once the breakdown of the votes was released is that white people did not change the way they voted, with the majority of white men and women voting Republican in those three races, with the disparity being most striking in the Georgia gubernatorial race.

And while it is essential to hold white men responsible for their unconscionable votes, the outcry over white women's votes in these races has been much louder, with many people—including Eltahawy—noting the ways in which white women serve as "foot soldiers of the patriarchy," and reliving the shock of the 2016 election, in which it was revealed that a majority of white women had voted for Trump.

The last two years have been filled with exhortations about the importance of female unity, and rallying cries aimed at all women, as if an entire gender were a monolithic entity, whose goals are all the same. Women are universally told to embrace their rage, assuming, incorrectly, that all women are mad about the same things. "Women's issues" are talked about as if they affect all women equally, but the fact is that there are countless women who are working against the interest of other women when it comes to things like access to health care and reproductive freedoms. If any further proof is needed to show that women don't automatically have the interests of other women at heart, consider the fact that fewer white women than white men voted for Abrams.

America's institutional patriarchy cannot be separated from its systemic white supremacy, and white women are the clearest example of which horrific system takes precedence over the other, as, again and again, millions of white women prioritize their status in a racist society. All the people who express surprise over the fact that these white women are voting against their own interests are ignoring the fact that white supremacy is in their interests; its continued primacy strengthens their place in the existing racial hierarchy, and they're betting that ceding power to white men will still benefit them more than would ceding power to people of color. It is a despicable gamble, of course, one which serves to oppress countless others and perpetuate a system of gross inequality.

But it's not an uninformed one; it would be wrong to say these women suffer from Stockholm Syndrome, or are naive as to what they're endorsing. These women are making calculated choices and placing themselves and their immediate needs over the needs of others. These are the women who perform a specific type of femininity—long blonde hair perfectly curled, as if wrapped around the hot barrel of a just-fired gun—knowing the kind of protection they'll get from the white men who are just itching to patrol a border they couldn't even find on a map. These women are Sarah Huckabee Sanders and Ivanka Trump and Kellyanne Conway, and they have all decided that they are secure enough in the continued existence of the power they have that they don't mind ensuring that other women, that men of color, that immigrants, that anyone different than them, will suffer. For now, anyway, the calculations these women have made have paid off; they have their power, they have their protection. But, as any gambler knows, eventually, the house always wins—and, after last night, the House is filled with a bunch of newly powerful women of color, and we can't wait to watch them start winning.

NEXT UP
Culture
6 Shows To Binge Once You've Finished 'The White Lotus'
Culture
An Ode To Stripperweb, The Beloved Sex Worker Forum
Entertainment
Ebony Riley's "Deuce Deuce" & 9 Other New Songs Out This Week
Fashion
Bottega Veneta Just Dropped The Next It Bag For Spring
Style + Culture, delivered straight to your inbox.