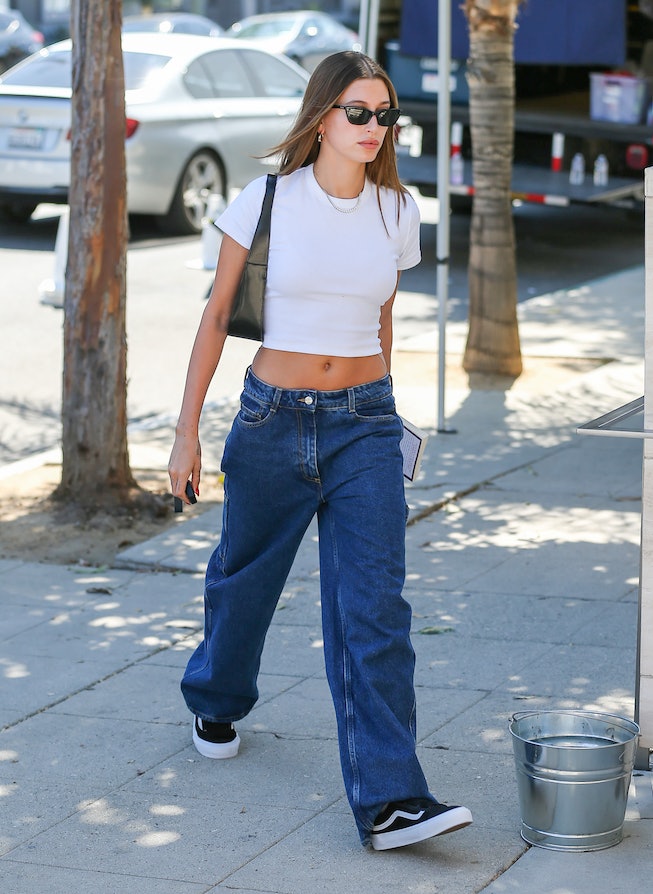 Baby braids were everywhere last Summer, with even Ariana Grande trading her signature high pony for face-framing braids, and it looks like this upcoming season is set to follow suit—with a slight twist. During the first weekend of Coachella last month, Hailey Beiber posted a series of beauty shots that TikTok instantly became obsessed with. Her blue under-eye eyeliner was a smash hit and so were her loose baby braids sectioned throughout her hair for the perfect festival-ready look. Now, Dua Lipa has hopped on the Y2K-inspired style, posting a similar braided look on her Instagram last week.

Previously a signature look of the late ’90s and early aughts (with Britney Spears, herself, as a cosigner), the skinny little braids have now framed the faces of the most influential and stylish women of the 2020s. We’ve seen Bella Hadid trying them out under her beanie, and her friend Devon Lee Carlson styling them in slightly thicker braids. Each girl has made the look her own by changing the number or thickness of braids while still staying in step with the trend.

While 2021 was all about the face-framing baby braids, after a few seasons of the trend’s ubiquity, they’ve now reached the next phase of their evolution. This year started strong with the rising baby braid ponytail trend—co-signed by Bella Hadid and not going anywhere anytime soon—but Hailey and Dua’s looks give face-framing braid a new life. Instead of just braiding two pieces at the front of your hair, they also braided two others halfway down their head to accentuate the look.

Sienree, a celebrity hairstylist based in Los Angeles, says that this baby braid style elevates the face-framing trend because it gives your hairstyle a 360˚ upgrade. “It’s adding just a little texture and style without trying too hard,” says Sienree. “You can add these baby braids to any natural hair texture and it immediately gives off an effortless cool-girl vibe,” she says.

Sienree recommends adding baby braids randomly throughout your hair to break up the all-over uniformity of your natural wave or curl pattern. While the style looks great on everyone, it’s easy to adjust it to work best with any hair texture. “For someone with curly hair, I would make the braids a bit thicker than I would for someone with straight fine hair,” says Sienree, “that way braids stand out and don’t get lost”. Howard Reyes, a senior stylist at Suite Caroline Salon, recommends misting strands with Orible Dry Texturizing Spray before braiding to add grit into the hair for a longer hold— especially important for freshly washed or straight, fine hair. He also suggests finishing the with a flexible hairspray like Outer Space by R+Co. No elastics are necessary.

Reyes says the baby braid trend is part of a larger “accessory resurgence” happening across the beauty space. “Beauty is always a high-impact accessory, and everyone is having fun experimenting,” he says. “More is better, and multidimensional maximalism makes your look feel very layered and custom to you.” But he also says not to overthink the style. “Going asymmetrical is always a cool option,” he says. Think: adding one braid on the left and then two on the right. “You can even tie micro-ribbons on the ends for a color pop to keep the maximalist vibe going.” Go forth and be extra.