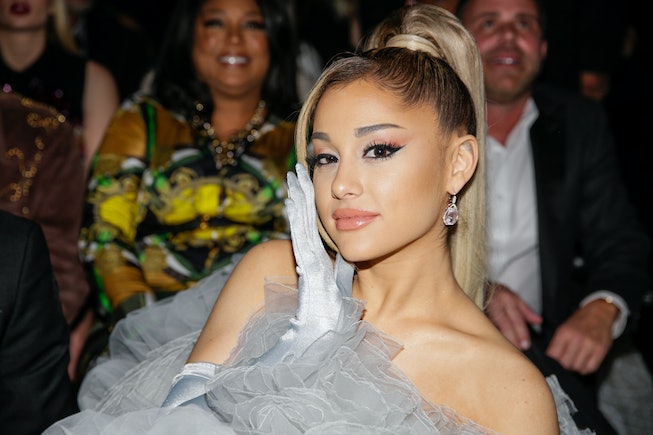 For the past year, the internet has been discussing why Ariana Grande has been experimenting with her look, noticeably ditching her deep shade of faux tan and beginning to try out different hair and makeup styles—without ever fully saying bye to her signature high ponytail, of course. Now, it seems Ariana has caught wind of the appearance-changing dialogue and is embracing a new style, dying her usually brunette hair a bright blonde.

Yesterday, the singer posted a photo dump on Instagram, as she is wont to do, with snaps of her and her husband, Dalton Gomez, outfit photos, dog photos, and her new blonde hair pulled back into a thick mid-pony tail with a cap. She also subtly compared her new look to the iconic White Lotus star Jennifer Coolidge. Amongst the personal photos was a video of Jennifer starring in the queer rom-com Single All the Way, dressed as Glinda the Good Witch from The Wizard Of Oz. As Ariana is also set to be starring as Glinda in the upcoming Wicked film adaptation, we couldn’t help but note even more comparisons between the two iconic, now-blondes. Known for doing a great impression of Coolidge on Instagram and talk shows alike, Ariana seems to be leaning in further to her Jennifer Coolidge era.

Ariana revealed her new blonde hair on social media last month with the low-key caption “new earrings”. Naturally, fans were excited about the change. “Blondiana just shattered the internet,” commented Sasha Allen. “A BLONDE DIVA,” wrote drag artist Gottmik. Since then, Ariana has posted a number of blonde snaps, including a R.E.M ballet-core photoshoot and a baby blue tennis outfit.

While the past few years have been dominated by ashy, silver-tone blonde tones, Ariana’s honey blonde is a more natural-looking shade that’s growing in popularity. Amidst the Y2K revival, yellow-toned platinum blondes have made a major comeback (think Billie Eilish’s transformation last year) and beauty icons like Jennifer Coolidge are now repping the blonde color of the moment. Now we can only hope for an Ariana and Jennifer selfie to grace the internet to commemorate the hair twins.

NEXT UP
Beauty
Megan Fox Is Completely Transformed By A New Blonde Bob
Beauty
Dua Lipa’s ’90s Updo Is Hair Inspo For Your Next Night Out
Beauty
Kylie Jenner Is Bringing 1920 Finger Waves to the 2020s
Beauty
Hailey Bieber Just Got A Margot Tenenbaum-Inspired Blunt Bob
Style + Culture, delivered straight to your inbox.