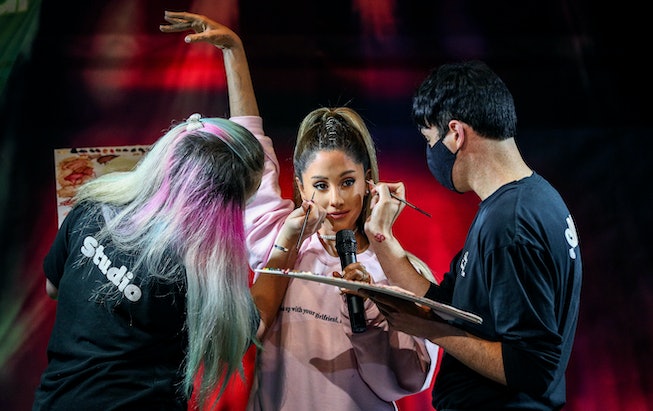 These days, it feels like almost every celebrity had their own beauty brand. From the cult favorites Kylie Cosmetics and Fenty Beauty to Rose Inc, Rosie Huntington-Whiteley’s brand new clean makeup brand, the industry is becoming dominated by celebrity-turned-beauty moguls. Beauty made Kylie a billionaire first, followed by Rihanna earlier this month. We can’t help but think that’s what’s next on the agenda for Ariana Grande.

It looks like retailers will want to start making room on the shelves for one more beauty line from our beloved Ari, who recently trademarked the name r.e.m Beauty. The name is a clear reference to her song title with the same name that was released in 2018. Ariana also has a wildly successful song-inspired fragrance line-up, including Thank U Next, R.E.M., and her latest scent God is a Woman, released last month.

Today, the Arianators got a more substantial confirmation of the upcoming launch from Ariana herself, via a billboard in New York’s Times Square. That’s one way to make sure your “clue” gets a lot of attention. While the design of the billboard is minimal, only teasing the name and “coming soon” on an otherwise plain background, one fan pointed out on Twitter that for Ariana, soon usually means “10 days or less”. Fan pages have already leaked screenshots of a launch event date of September 17th in London.

The trademark itself gives us a few more clues about what the brand could look like, listing a wide variety of beauty products. Concealers, lash serums, eyeshadows, lip tints, and brow pencils are all among the products listed. Several trademark names and images were filed including stylized images of an r.e.m. logo (as seen on the billboard) and even a cloud icon which is one of the “Positions” singer’s signature symbols.

It also comes as little surprise that hair extensions and false hair are also listed. Whether or not that will include her famous ponytail still remains to be seen.

While we wait for more updates from Ariana’s headquarters, there’s already a website where you can sign up for updates and the @r.em.beauty Instagram handle already has over 61k followers and climbing.