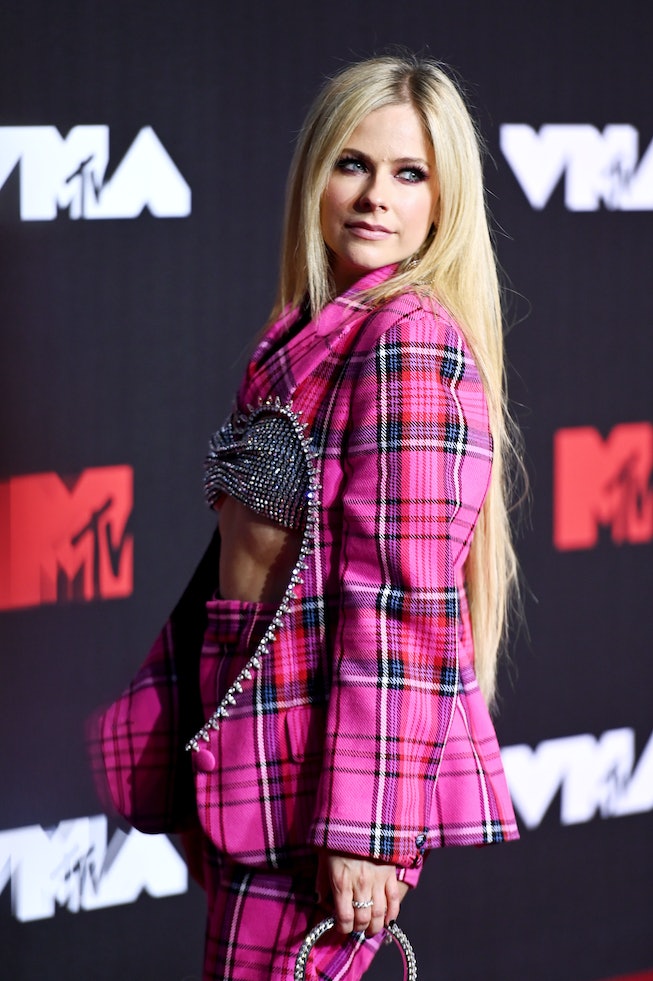 In amongst the current revival of all things Y2K, the decade’s original punk princess, Avril Lavigne has also made a major comeback. Last week, she hosted an album release party for her new album, Love Sux—joined by MGK and her boyfriend, Mod Sun. “So glad I got to celebrate it with all my friends and collaborators who made this album possible,” she wrote on Instagram. At the nostalgia fest, which also counted Megan Fox on the guest list, Lavigne wore new fluorescent orange extensions. In true 2000s era fashion, Lavigne has now updated those extensions to include black horizontal highlights, a.k.a. raccoon tail hair.

Lavigne posted a preview of the hair and (her new music video) on Instagram last Friday. In it, we got a sneak peek at her platinum blonde and black horizontal highlights, worn under the top layer of her layered blonde hair, alongside her neon orange streaks. She then dropped the official music video for “Love It When You Hate Me” featuring Blackbear, on Saturday, May 5. In it, we see Lavigne performing with similar energy to her 2007 Girlfriend hit, where she was deeply into her hot pink hair streak phase. The latest video takes place in prison, where Lavigne’s orange and striped extensions match her orange and striped outfits.

Two-toned hair and chunky highlights had already been circulating in the trend cycle recently, linking back to Dua Lipa’s look from her Future Nostalgia album cover. But thanks largely to TikTok, 2000s scene culture is making a comeback and so too is emo girl signature raccoon tail hair. During the golden days of scene culture on Tumblr, there was an array of clip-in two-toned hair extensions. Usually black (because, of course, emo) and another lighter color, these gave a horizontal effect and were usually clipped in the under layers of the hair or in dramatic side bangs.

The reemergence of the trend is without the sweeping side bangs (at least for now), and has been more subtle. It’s also already had the high-fashion stamp of approval. Wig artist Tomihiro Kono compared it to Polish Viennetta ice cream and Collina Strada’s SS22 runway show at New York Fashion Week last year featured a clip-in variation, as well as larger highlights. With Avril Lavigne’s more bold take on the nostalgic trend, scene hair is set for not only a fringe comeback but a full-on revival—for better or worse.