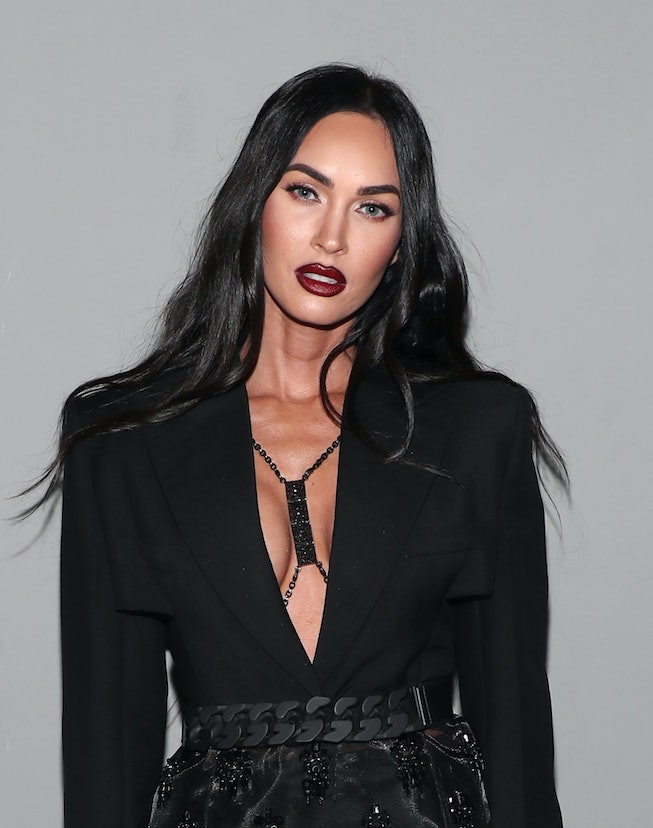 As if Avril Lavigne hosting an album release party last night—joined by MGK and her boyfriend Mod Sun—wasn’t enough of a nostalgia fest, Megan Fox attended the performance with an iconic early 2000s hairstyle. Showing up to the event with her fiancé (and feature on Lavigne’s new album), Fox wore her nearly black hair in goth Harley Quinn pigtails with loose tendrils framing her face. The high pigtails were styled in soft waves, with hair wrapped around the ponytail bases to cover the elastic bands for a more elevated, less school girl look.

Fox’s hair was styled by hairstylist Glen Coco, who first posted the look on Instagram. “Just a girl at a rock show,” he captioned the look. Makeup artist Jenna Kristina was responsible for Fox’s glam, featuring carved out brows, extra full lashes, and white liner on her water lines for an especially wide-eyed look. Fox then posted the look calling herself “BDSM Spice”. “Offering myself to the spice girls if they are in need of a new member,” she captioned the post. Inspired by Fox, we’re considering this our new party hairstyle. As for Avril Lavigne’s Love Sux album release party, Lavigne herself called the release party a “rager”. “So glad I got to celebrate it with all my friends and collaborators who made this album possible,” she wrote on Instagram.

In recent months, Fox and MGK have cemented their status as the first couple of pop punk, often wearing matching outfits (and once even a conjoined chain manicure). This time around, Fox’s whole outfit was Y2K inspired, wearing a black mesh crop top, a matching oversized bomber jacket, baggy pants, and chunky combat boots. Snapped arriving together, MGK wore a black and pink crop top and newly pink hair.

NEXT UP
Beauty
No One Does #PamCore Beauty Better Than Pamela Anderson, Herself
Beauty
Hailey Bieber Just Got A Margot Tenenbaum-Inspired Blunt Bob
Beauty
Storm Reid Tries Out A Y2K Girl Band-Favorite Hair Trend
Beauty
Megan Fox Is Completely Transformed By A New Blonde Bob
Style + Culture, delivered straight to your inbox.