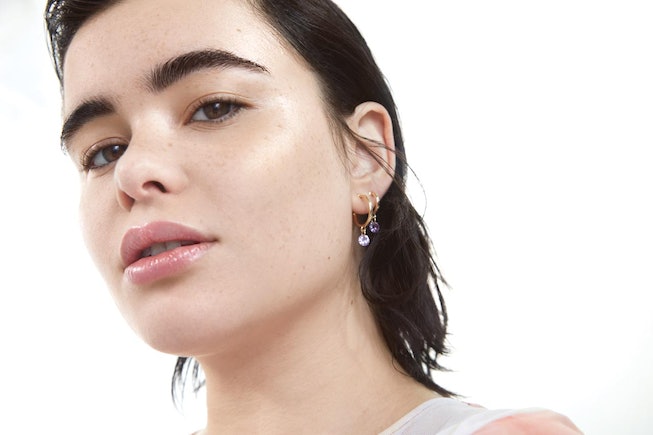 It would be easy to assume, given just how influential HBO's hit series Euphoria was to the beauty world, that its lead actors would be endorsing cosmetics left and right off-screen without giving it much thought. But when Barbie Ferreira was announced as the face of Becca at the start of 2020, she made it clear that the partnership was designed with more intention than most.

While the brand isn't new to successful influencer and celebrity collaborations — it's created collections with everyone from Chrissy Teigen to YouTuber Jaclyn Hill — Becca shared bigger, longer-term plans when announcing Ferreira as its new face, sharing that in addition to starring in campaigns, the actor would be consulting on more mindful casting as well as larger conversations around body positivity, gender, race, and mental health. It's a huge, and rare, opportunity, and surely not one Ferreira is taking lightly.

"I want to be really authentic to me and to where I come from and where I started — doing fashion growing up and bringing a bit of the New York queer scene into the beauty world," she tells NYLON over a Zoom call. "Sometimes [when] that happens, it's fleeting or trendy, but I think for me, the most important part was bringing in people that I really, really admire, and making sure that everything is safe and feels great and feels like there's a lot of love behind it. Just being a bad b*tch, using Becca in a way that's very positive."

Ferreira's latest work with the brand is in support of the Becca Zero No Pigment Collection, a line of two new (literal) no-makeup makeup contenders including the Zero No Pigment Virtual Foundation ($36), a primer-like skincare and makeup hybrid designed to blur and smooth the skin's appearance, and the Zero No Pigment Glass Highlighter ($24), a multi-purpose, clear gloss for the face and lips that'll leave a high shine without the sticky feel. It's a collection Ferreira can get behind wholeheartedly, as she's continuing to explore how she wants to express herself in terms of beauty — instead of what's being put on her as a model or actor on set.

Ahead, NYLON spoke with Ferreira about the new collection, breaking free from the "body positive activist" labels that have been thrust upon her since she was a teenager, and her first impressions of the Euphoria script.

What was your relationship with beauty like growing up? Who were the people, or aesthetics, you looked up to?

Growing up, I really was fascinated by people who were probably more on the goth side. So for me, I started wearing makeup, wearing heavy eyeliner and really colorful makeup and just kind of ... eye lining [laughs]. Putting so much eyeliner on that it just starts melting on my face. My beauty idols at the time were kind of like the internet girls of that age, which were like scene queens and people who wore crazy things and really extreme makeup. I always tried to emulate that in my little kid way, which didn't always look great, but it was a great point of reference for what I was doing. I was very much attracted to darker makeup and a lot of colors that were very neon and in your face.

Through all the different transitions you've had in your life, from modeling to acting, how has that changed the relationship with beauty?

I think when I was modeling my relationship with beauty really was at a standstill, because I was working and traveling so much and people were just putting makeup on me every day, so I didn't really wear as much makeup as I used to on my off-days. I think with acting, it's so different, and I really feel more inspired about what I want to look like and who I want to be in this world and how I want to present myself. It's definitely been more of a makeup renaissance for me since I've started acting because I've been exploring it more.

Your partnership with Becca is unique in that more than just being the face for new launches, you’re able to consult on casting and conversations about gender, race, mental health, and more. Can you talk a bit about how the experience has been so far, and how you’ve been able to put some of those things into motion behind the scenes?

When I started working with Becca, I think the most important thing was that I wanted to bring my friends in, people that I've admired from New York, who are in the fashion industry, who are notoriously slept on and haven't had the opportunities to really be in these spaces before. And as a white queer person, I'm like, "What can I do to make sure that everything is even, and I'm doing my best?" If I was going to create a brand, I already had this roster of my friends who I think are just amazing creatives and amazing people and gorgeous and all this stuff. So, that was really important to me when I started working with Becca, and Becca has been amazing; most of these campaigns are [with] people that I've known for years and people that I grew up with essentially.

Becca Zero is quite literally no-makeup makeup — how do you see that fitting into how you approach your own routine?

Well, for me, I never really wear foundation unless I'm at an event or working. So I think this is the perfect product for people who either just want to put something on, like just foundation, or they don't like wearing foundation in general that has pigment and that ends up cracking or settling into your like pores and all that stuff.

I'm not sure if I'm just dry or whatever, but toward the end [of wearing makeup], it just feels like I have something on my face. So, for me it's a perfect product because I can put either nothing on top or put concealer, or I can just continue to do a full makeup look without the foundation. I already did [the latter] before, but without anything on underneath, the makeup would look kind of uneven and the application not smooth. I think it's the perfect product for people who just want to let their skin kind of shine through and not have to put so many layers on top of it. And it really just gives a blurry kind of like filter-y, velvety look.

You shared in a recent interview that after years of being put on as a “body positive activist,” you want to move away from that label and are more interested now in putting those practices to work without talking about them all the time. Can you talk a bit about what that looks like for you now?

This is something that I've grappled with from 16. I started working at 16, and I was on the thinner side at the time. And people were already thrusting this body-positivity, diversity-inclusivity conversation on me. To me, I was a slightly above average in the modeling world weight-wise and also just a cis white woman. So for me, I mean, even in the early days, I would kind of try to pivot and kind of be like, well, this is not the end-all of diversity. You can't just put me in a campaign and then think, "Oh, that's it, that's all the work we have to do. We did it. Let's pat ourselves on the back." And that was really something that I struggled with throughout all of my career.

I kind of try to find a way to talk about the issues of fashion when I was a model, as a bigger issue, because it is the idea of this Eurocentric, waifish model that we all assume has to be in every campaign, that's going to sell clothes. I think through the years of me modeling and meeting other people, I just felt really hopeful in a way where I think that there's so many different voices and so many different people out here that deserve everything in the world. So for me, talking about body positivity felt a little bit like it was missing the point of the bigger issue. That's really when I tried to kind of move away from that because I think what we have to start thinking about is what kind of casting reflects people, reflects society, reflects the consumers correctly and really makes people feel good instead of feeling bad enough to buy something. You know what I mean?

Do you feel like that’s freed you (and your identity) up to be recognized for other things that you’re prioritizing right now?

I got this opportunity to play a really great character, fully fleshed out role in Euphoria and my upcoming movie Unpregnant, which is going to be really exciting. And I kind of just said, "You know what, I just want people to be almost like, ignore my body." You know what I mean? It's like this thing I talk to my friends about where it's like, if you're bigger, it's like you're taking up space, you're more aware of the space you're taking up.

With acting, I just really think that we should ascend beyond body positivity and ascend beyond these kind of tokenizing little niches and just realize that people look like this and people come in all shapes, sizes, shades, sexualities, and genders. The fact that we're just now starting to see an influx of stories being told, I think it's really exciting, but also a bit late. It's like we just have to start normalizing seeing different people on TV, movies, and magazines and in the media in general and step beyond what's so obvious and what's internal and what we as a society want to see.

Euphoria was groundbreaking for a lot of different reasons. How has working on the series changed the way you look at beauty, identity, and confidence in general?

I think Euphoria for me was the most special script I've ever read because so many things that we assume [just happens] has to go into putting people who are slightly different than the average actor. It feels like their whole storyline has to revolve around it. I just remember reading Rue and Jules together and how that was so beautiful, and it wasn't watered down for anybody, and all these different characters that, I mean, I feel like every stereotype that the teen movies and teen shows usually have, was kind of broken. I think that's really what drew me to it.

And especially Kat — I just feel like I've never seen a character like that, where she's expressing her sexuality and being a fat person and it not being the butt of the joke. You know what I mean? There's just something about Euphoria, the way it was written — and shout-out to Sam [Levinson, the show's creator] for this — but it was just so true to the experience while not ignoring the experience. It's informing the episodes and the character arcs, without it being overtly announced or having to be spelled out for people. I think that's where really good TV and vivid storytelling comes from, not making it necessarily the focus of the story, but it's just the way that kids live their life.

I think kids can just relate to that. I'm like an older Gen Z, I'm kind of like the grandfather of Gen Z, and I've seen this kind of festering underneath it; this kind of anger of how we're treated. A lot of things are dumbed down for us, and we're just supposed to accept it as something that is progressive. But I think the future of storytelling that is truly inclusive is the normalization of everything.