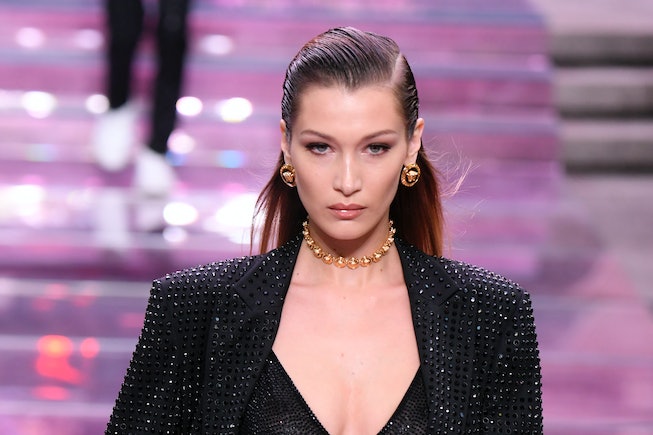 Bella Hadid turned self-quarantine into a celebration, and commemorated her 500th day of practicing socially distant practices to avoid spreading the coronavirus with a major makeup moment. Mere days after revealing her Elle cover, the model acted as a temporary makeup artist, and gave herself a truly gorgeous cat eye.

The photo, which was taken on May 19 and shared on Instagram on August 4, had Hadid trying out a new look. "Made my face a canvas on one of the many days I felt completely useless ... will prob delete later," she wrote.

Posing for an at-home photoshoot that featured the look, Hadid gave followers a look at her makeup from every angle. The routine, which was created using Dior makeup, had Hadid creating an artful eye wing. Turning her eyes into miniature butterfly wings, Hadid used black liner to begin a wing that ran from far below the inner corners of each eye to the outside corners of each eye. Her wings extended up and past her brows, and her created shape covered much of her upper face.

The look featured the addition of orange-colored product, with Hadid lining half of her lids, and inside the wings with the color. Covering her top and bottom lashes in mascara, she also added a small, purposeful dot of black product below the outside bottom corners of her eyes.

The photo, which she hadn't deleted as of Wednesday morning, was a hit among fans and celebrities. Yara Shahidi offered praise hands for the makeup, while SZA called it "fye." Marc Jacobs wrote that it was "gorgeous," while one fan encouraged the model to not delete the photo.

In addition to improving her makeup skills during quarantine, Hadid has acted as her own hairstylist. Along with previously trying out a quarantine beauty routine that she credited to having some extra time, the model had done the unthinkable, and cut her own bangs. Sharing the trimming process with Instagram followers, she captured as she cleaned up her side bangs, and then acted as stylist for a friend.