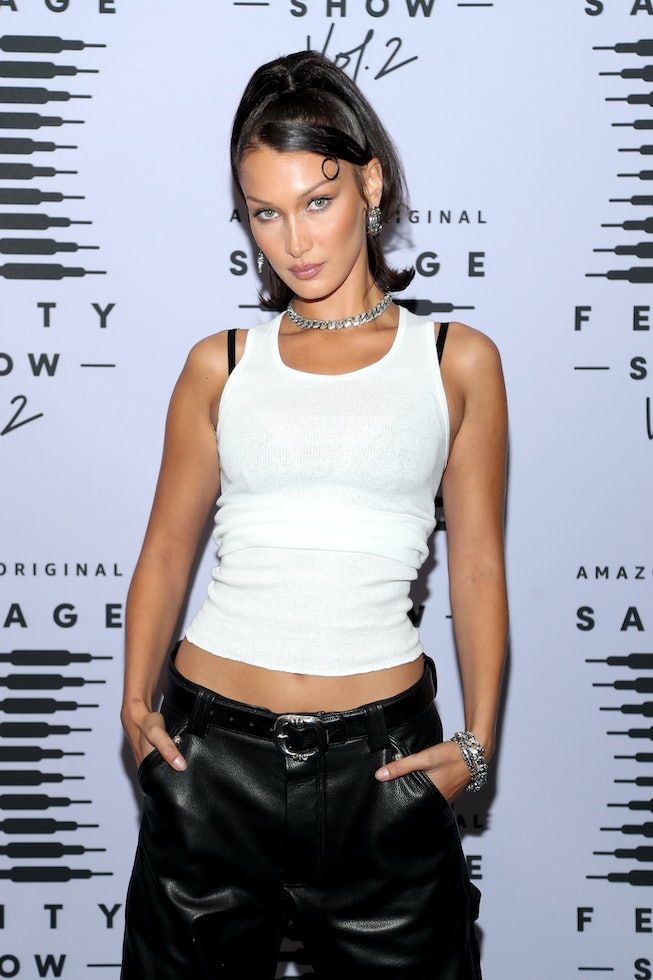 Bella Hadid got a jumpstart on her October birthday festivities, and teamed up with celebrity nail artist Mei Kawajiri for a super vintage-inspired manicure. The highly-detailed look was revealed on Instagram over the weekend, and at one point, Hadid even showcased the new glow-in-the-dark ability of her nails.

For the look, painted by Dua Lipa's go-to nail artist, Hadid kept the base of her nails clear, and added white to the tips. Atop the translucent coat, Kawajiri added colorful, miniature artwork, including bright, rainbow daisies, and tiny mushrooms. In a photograph closeup of the tiny toadstools, you can see the 3-D-like effect of the coloring, including bumpy dots that adorned each mushroom.

"Happy Birthday Nails for @bellahadid," Kawajiri wrote of the work, which was completed ahead of the model's October 9 birthday. Hadid shared a few snaps of the completed work on her Instagram Story, including one image beneath a black light, which revealed the green coloring came with glow-in-the-dark abilities.

The style is another major celebrity manicure from 2020, and it's one look that's perfect for the upcoming Halloween season. Multiple polish brands including ORLY and Wet 'n Wild offer glow-in-the-dark polish, and you could easily pair the color choice with nail stickers.

Below, see the manicure in all its neon-colored glory.