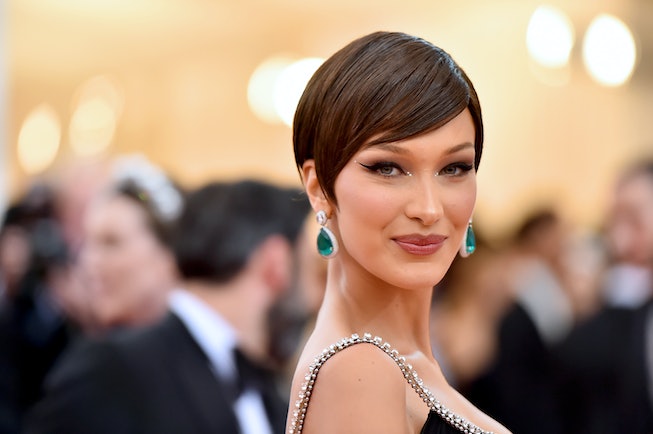 Another year of unforgettable Met Gala fashions and daring beauty looks were temporarily put on hold when the 2020 event was postponed. Luckily, some sneak peeks at celebrity looks continue to make their way to social media. For the latest look at what would have been, Bella Hadid's 2020 Met Gala beauty look was shared on Instagram, and the look was nothing short of major.

Makeup artist Sam Visser shared "what would have been", Allure reports, and posted a series of photos of Hadid previously testing out the planned look. For the 2020 Met Gala, the model was slated to wear a strawberry blonde wig. Along with a stunning change in hair color, Hadid's hair was to feature a crimped curl and a full bang. In the last photo, she posed with her hair in a mock updo, showing off its length, which hit a bit below her shoulders.

The evening's makeup would have included a touch of faux freckles across her cheeks, a striking dose of highlighter and blush, and a shiny brown lip. Her eyes featured a soft shade of purple, and both the top and bottom lashes were coated with mascara.

In a second image shared by Visser, Hadid was wearing a straightened out version of the hair color, and her makeup was much more subtle. It's unclear whether the look was also intended for the Met Gala evening, but Hadid as a redhead earned the Instagram comment support of Kim Kardashian-West and Tokyo Stylez.

Originally scheduled for May 4, 2020, this year's Met Gala was postponed due to the ongoing coronavirus pandemic. It's unclear if the event might still happen this year, but its accompanying yearly fashion exhibit will be opening in late October, and remain open until February 2021, WWD reported. Even with the event on a hiatus, there have been peeks at other planned looks, including Katy Perry's homage to Madonna and Amanda Seyfried's billowing blue prairie dress.

Below, pretend the Met Gala continues on with a look at Hadid's planned routine.