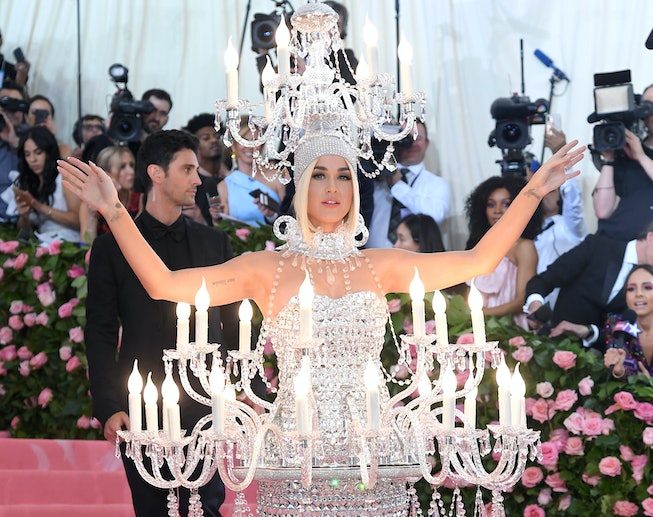 The world missed out on a lot of great fashion on Monday due to the postponement of the 2020 Met Gala. Few may be more disappointed than Katy Perry, though, who was planning her first pregnancy look for the red carpet.

Perry showed what she would have worn on Instagram on Monday night, and it certainly would have made an impact. The singer planned on paying homage to Madonna with a cone bra look by Jean Paul Gaultier, which also had a structured bump for her growing belly. The cone bra originally made its debut on Madonna in 1983, making Perry's choice perfectly on theme for the Met's About Time: Fashion and Duration exhibit at the Costume Institute.

"What would have been…" Perry wrote on Instagram adding the broken heart emoji.

Despite the major fashion event not taking place on the first Monday of May, there was still plenty of Met Gala content to be had. A slew of celebrities and designers posted their favorite gala moments of the past on Instagram, while Vogue hosted a livestream event, as well as celebrity-curated playlists and an oral history of the annual event.

Unfortunately, Perry's look isn't exactly the kind that she can just plan to wear for next time, but there's still plenty of time for her to flaunt it around the house.

NEXT UP
Culture
Caroline Polachek In KNWLS & More Party Photos You Missed
Culture
On The List (With Melissa Rich): How To Throw The Ultimate Apartment Party
Fashion
The Best Celebrity Fit Pics From Paris Men’s Fashion Week
Fashion
The Wildest Front-Row Looks From Couture Week In Paris
Style + Culture, delivered straight to your inbox.