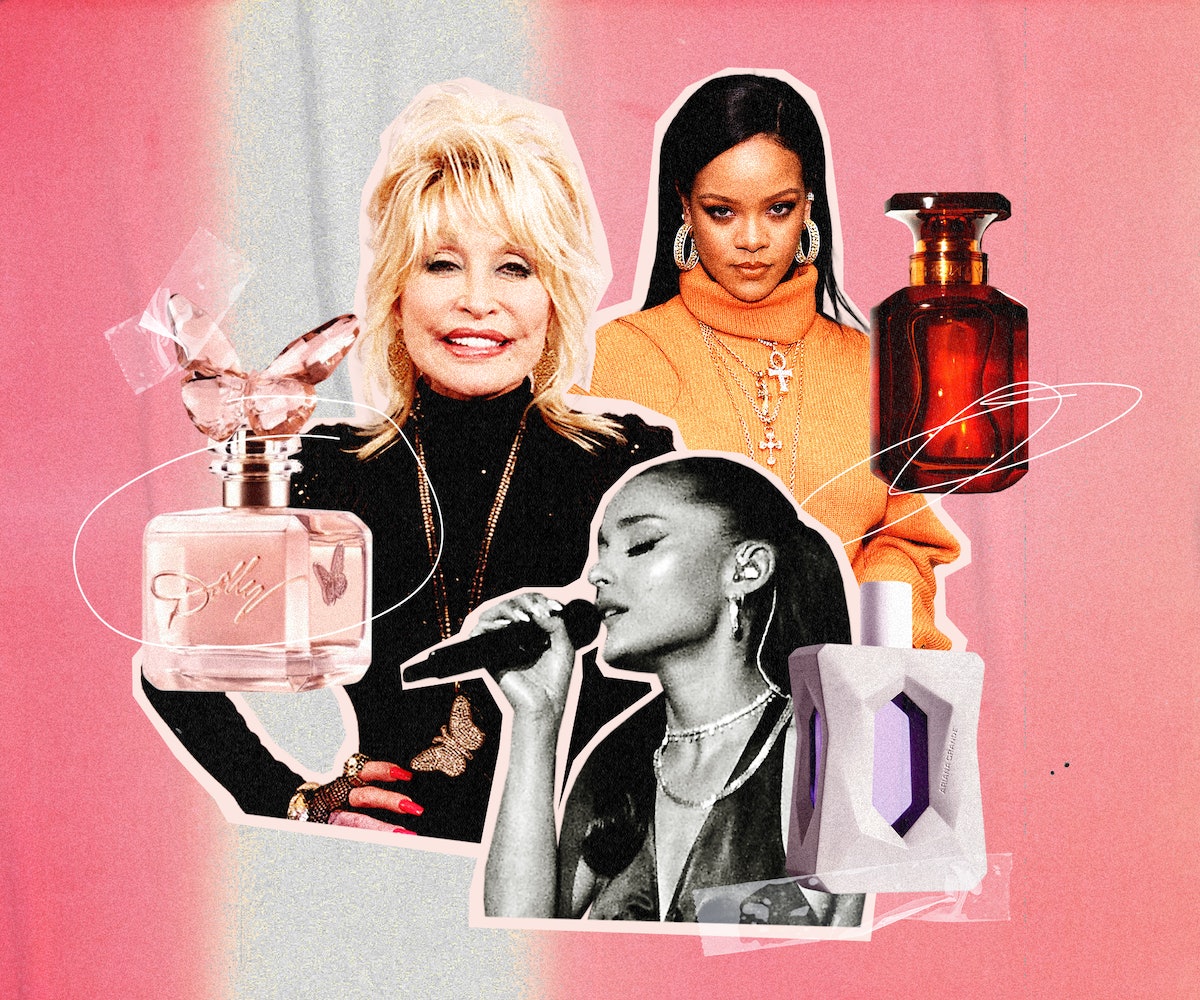 Do you remember like, five or ten years ago when celebrity scents were absolutely everywhere? That very full mall counter image left a lasting impression on the way consumers view the category. Many people still think celeb scents are saturating the market. But in reality? The tide has turned. You may not have realized, but fame-fronted scents aren’t getting churned out nearly as frequently as they used to. At long last, the bubble has burst. Or maybe celebrities have pivoted to makeup and skincare so they haven’t left beauty entirely, they’ve just shifted their focus.

However, there are still a few new celebrity scents coming out year after year, and some of them are even worth getting excited about. Previous iterations of celebrity scents may have gotten a bad name, based on cheesy bottles or their general past ubiquity. But, a lot of these perfumes are being created by the same noses that are making the biggest scents for some of the most well-respected perfume houses and brands, so don’t turn your nose up at them so fast. So, which are the best celebrity scents worth trying? Let’s get into it.

The next generation of Rihanna fragrances is here. After changing the beauty as we know it with Fenty Beauty and Fenty Skin, Rihanna is here to redefine (Rih-define? sorry) another category with her new fragrance.

What I like most about this scent is, in an industry where a lot of launches end up looking and feeling the same, Fenty Eau De Parfum is a complete surprise. It’s bold, heavy, and demands your attention. It’s completely doing its own thing, and honestly, it’s a bit of a risk, but it is very, very good. The fragrance blends blueberry and tangerine with Bulgarian rose, geranium, and magnolia, and adds some depth with patchouli and musk. On my skin, each of the notes jump out at me throughout wear, specifically the blueberry and rose, but they all blend together for a scent that smells spicy, sweet, earthy, and fiery. Another surprise is that the fragrance is a linear scent, made to smell the same throughout wear, rather than evolving from top, heart, and base notes. Fenty Eau De Parfum is not at all what I was expecting, but that’s what makes it so much better.

God is a Woman by Ariana Grande

Listen. Ariana Grande fragrances do not miss. Her 2018 fragrance, Cloud, fast became an absolute holy grail for fragrance lovers whether they were Ari fans or not, and 2020’s R.E.M. is another hit. The God is a Woman fragrance, like the song, is another undeniable smash.

Let’s start with the notes: It opens with pear and ambrette, which is a seed-derived oil with a floral musky scent. In the middle there’s rose and orris, a root that’s reminiscent of violet, and at the base there’s sandalwood and vanilla. It’s sweet, fluid, and refreshing. It feels like a splash of cool water or like purple berries floating in champagne. It’s lightweight but, somehow still consistent. It sort of feels like it’s floating above you rather than on your skin.

Hayley Kiyoko brings us something like a skin scent, but it’s also not really. Hue is one of those scents that’s subtle, and sort of becomes a part of your vibe, rather than taking center stage. The main notes sounds fruity and floral, but the scent itself, is a larger interpretation of musk, with other notes to push and pull it a bit.

It opens with watermelon, blood orange, and freesia, gives way to litchi, rose, magnolia, and peony, with a base of cacao and musk. Hue is lovely and soft. It’s one of those scents you throw on when you don’t really want to be wearing a scent, but you want something, you know? It’s sort of like, if Santal 33 had a little sister with an attitude, this would be it.

Scent from Above by Dolly Parton

Scent From Above
Dolly Parton

Dolly Parton is the definition of GLAM. She is THE icon. A Dolly Parton fragrance makes so much sense. I feel so lucky that we get to have this fragrance in the year 2021, and I am also confused why it has never existed before.

I was eagerly anticipating this fragrance but honestly, I had no idea what it would be like. I am, I guess not surprised, but elated to say that it’s everything I hoped it would be and more. The scent is a blast. It’s pink and sparkling, like a sweet gin and tonic, with enough florals to add texture and all those base notes to give it longevity. Not to take it there but Dolly has always been about inclusion, and really, there is something in there for everyone. It opens with pear, mandarin, black currant, and peony, the heart gives you jasmine, lily, and vanilla orchid, with a sturdy base of sandalwood, musk, patchouli, tonka, and amber woods. It’s completely devoid of any age or season. It’s timeless, just like Dolly herself.

Speaking of icons. CHER? My god.

Cher Eau De Couture launched in 2019, but this actually wasn’t Cher’s first fragrance. Cher originally launched another scent called Uninhibited in 1987. That was about 15 years before the celebrity fragrance boom, and people didn’t really get it. That was even four years before what is considered the first real celebrity fragrance, White Diamonds by Elizabeth Taylor. As crazy as it is to think about now, in 1987 people didn’t really understand how to receive a scent like this, from even a living legend like Cher.

Resilient as ever, Cher came back with another scent that got the fanfare it deserved. My favorite thing about Cher Eau De Couture is that it smells exactly the way you want Cher to smell. Opening with bergamot, clove(!), and neroli, it gives way to rose and orange flower, before settling into sandalwood, vetiver, and vanilla orchid. It’s very ’80s– in a great way. It’s strong, sweet, and spicy. It smells like a drag queen dressing room, or a quick-change room of the side of a stage. It’s absolute full-blown glamour in a bottle, exactly the kind of fragrance Cher deserves.

So the gag is, people really love KKW fragrances, and for good reason. Kim makes good stuff. But these Kendall scents? Something else. Especially Olive. Ugh, this one is so GOOD.

Olive is a big aldehyde bomb. Aldehydes are actually synthetic notes that usually smell very soapy (like literal white bar soap). This fragrances mixes those aldehydes with rose and bergamot, then brings in freesia and jasmine, and finishes it off with amber, patchouli, and vetiver. What that does is pull out the sweetness and blend in the other notes to make a typically sterile scent come to life in a completely new way. It’s a delightful, sweet, rubbery fragrance, almost like pulling a brand-new Barbie out of the box. Olive takes you on such a fun ride and is one of those fragrances that will make you smell yourself over and over again throughout the day.

Okay, if we’re talking about Barbies, we have to talk about Plastic by Trixie Mattel.

This fragrance came out pretty early in Trixie’s career. Besides merch, it was one of her first products (I suppose this is still merch, but different). These days, you can’t turn your head without seeing a Trixie Mattel project, but Plastic was one of her first forays into product and it remains just as enjoyable today.

Barbie is one of Trixie’s biggest inspirations, so much so that she adopted Mattel as her surname. Trixie, like Barbie, is a branding expert, and since she is something of a walking Barbie herself, it’s no surprise that this smells like a new doll. Plastic smells like the best, most exciting, joyful version of plastic–like newness. It opens with lavender and tropical pink guava, warms up to cedar and cherry blossom, and settles into pink cotton candy, sandalwood, amber, and vanilla. For being such a fun fragrance, Plastic is actually super sophisticated. Remember, Barbie was a working woman! She was an astronaut, a scientist, and a teacher!

This fragrance is underrated, but everything about it is beautiful. The scent! The bottle! The face! Jennifer Aniston is perhaps not the most groundbreaking fragrance ever (Jen has always been best known for having mass appeal), but it’s worth getting your hands on if you like a classic floral fragrance. At the top, you’ll find citrus and rose, in the middle there are jasmine, lily, and violet, and holding it down at the base are sandalwood, amber, and musk. (She’s so down to earth!)

Jennifer Aniston is an American, no, global icon that minds her own business and remains unproblematic. It’s fitting that she has been immortalized in a fragrance. Is there anyone that doesn’t stan? The answer is no.

As far as I’m concerned, Jennifer Lopez can do whatever she wants. She gave us the iconic Glow, which had a huge influence on redefining celebrity fragrances of the 2000s, along with Britney, Paris, and Mariah. But really, was there anything bigger than Glow?

Promise was a pretty quiet launch, all things considered, especially because Jennifer Lopez is like, never out of the public eye. So this is one of her lesser known fragrances, but definitely still worth knowing. Promise is a sweet fragrance that reminds me of crystallized fruit. It gives you pear, tangerine, and berries, before opening up to the stronger elements, orris, jasmine, and honeysuckle. Then it’s is anchored by amber and wood. It leans into the fruit without feeling like a toothache, but you’ll still smell delicious.

Did you know Tilda Swinton has a fragrance? Not many people do. It’s been out longer than the rest of the scents on this list, but it feels like the best kept secret in scent, so I’m putting it on my list.

Like This is homey, inviting, warm, and sweet, but not over-the-top about it. It blends together ginger, pumpkin (which, surprise, is rarely found in fragrance), neroli, vetiver, spice, musk, and wood scents–just to name a few notes. It feels like your favorite sweater that you wear so often your scent just clings to it. It’s a different kind of celebrity scent, but then again, Tilda Swinton is a different kind of celebrity.