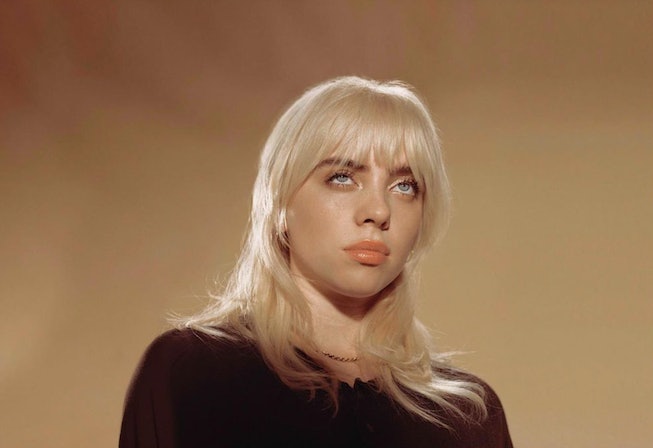 Billie Eilish’s hair been a hot topic of discussion since the moment she came on the scene. Who can forget her once signature green roots and then her dramatic blonde reveal, breaking the internet and setting TikTok into a wolf-cut frenzy?

Earlier this year, she revealed she’d been wearing a wig for weeks before timing her platinum blonde hair reveal to her Happier Than Ever album release. She had started dyeing her hair in January, then the process took six weeks to complete (and to minimize hair damage), and she finally posted the transformation on Instagram on March 17.

Historically, Billie has never been afraid to experiment with her hair color. In 2016, she had icy silver hair, then dusty lavender, deep blue, and green all in 2018. By 2019, she had settled with her neon green roots but switched it up by getting a mullet-like shag. Billie says that color was the longest she’d ever stuck with one look. Comparatively, her hair styles have changed more subtly– until now. Billie Eilish’s new bob haircut has taken the internet by storm.

Yesterday, the star posted the hair change to her Instagram stories. She kept her nearly-white platinum blonde color, but showed off a shaggy new cut that will have fans everywhere reaching for their scissors. The singer also revealed the heartwarming personal reason behind the chop.

Posting a video of herself in a car, the 19-year-old showed off a big new cut—trading her long hair for a textured bob. “Gone,” she captioned it simply.

Billie took to her Instagram stories to explain the motivation behind the ’70s-inspired cut, referencing a picture of her mom. “Like my mama,” she wrote.

It’s been a big week overall for Billie, who continues to lead an all-woman top 3 on the Billboard 200 Albums chart. Despite the cut, her hair is still in keeping with the aesthetic she’s been wearing for the entirety of her Happier Than Ever album release.

Fans are already speculating on what the artist will do next with her hair, with one suggesting she’ll shave her hair off within this next month. While her next (probably dramatic) hair choice remains to be seen, Billie has proven herself to always have an extremely well-thought-out plan for her next hair moment at all times.

The only thing we can easily predict is that she’ll continue to break the internet along the way. Is there such thing as being too invested in her hair journey? Asking for a friend.