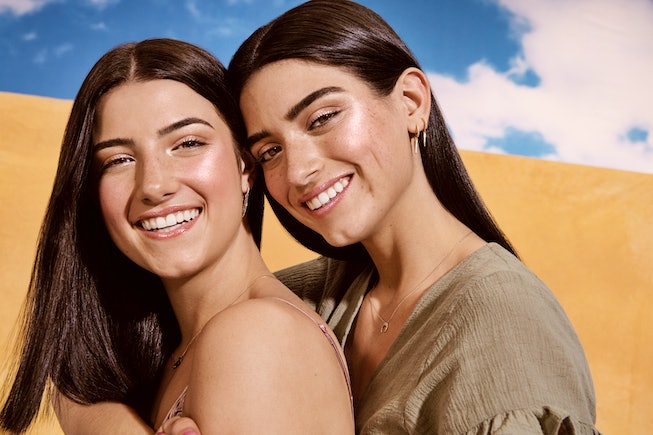 TikTok stars and sisters, Dixie and Charli D'Amelio have teamed up with Morphe 2 for another collection aimed at giving you a year-round glow.

Back in July, the pair were announced as the faces of Morphe 2, a sub-collection of the Morphe brand specifically geared towards Gen-Z. Following an inaugural campaign in which the sisters served up beauty routines that were heavy on gloss and glow, they've returned, fronting a second drop of goodies.

Five new Morphe 2 products will debut on Morphe.com on Thursday, September 10. Much like the debut Morphe 2 collection, this second line features makeup geared towards creating a soft, minimalistic looks.

There's also the Brow Crush Tinted Brow Gel ($7), available in five shades, and the Gleamcatcher Illuminator ($14), a silky illuminator in three shades that adds a touch of glow to your daily routine. The products are all intended to work together and combine with the previously unveiled Morphe 2 items, including Jelly Eye Shimmer shadow and Hint Hint Skin Tint, a hydrating fluid tint for the skin that comes in 20 shades.

Over the past few months, the D'Amelio sisters have popped up in campaigns for multiple beauty brands. The pair previously created a line of nail polish for Orosa Beauty, and Dixie was selected as the face of Dermalogica.

Admire the complete collection, below.

NEXT UP
Beauty
Halloween Cat Makeup Ideas, From Easy to Inspired
Beauty
Where To Shop For TikTok’s Trendy Color Eye Contacts
Beauty
TikTok Wants You To Wear Mascara Anywhere But On Your Lashes
Life
How To Dress For Your Birth Chart, According To An Astrologer