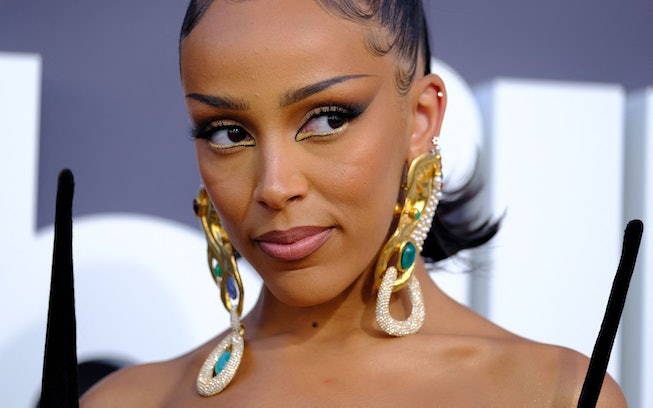 Last month, Doja Cat surprised and delighted fans by cutting her hair into a two-toned, super-short pixie cut. She then went from what fans called her “Eleven era”—referencing the hit Netflix show Stranger Things—to fully shaving her head one week ago. Alongside her new buzz cut, the pop star also shaved her eyebrows off on Instagram Live. Doja, who has previously tried out the bleached brow trend and has tried shaving lines, patterns, and designs onto her eyebrows, is now is taking the new real estate on her forehead as a way to experiment with creative and colorful makeup looks.

From frequently changing up her wigs and posting dramatic eye makeup looks on her Instagram, Doja Cat has proved time and again that she’s not afraid to play with beauty, showing herself however she sees fit for an album, a performance, or even just a moment. Her fearlessness extends to her eyebrows, that she freely reshapes, shaves, or dyes on a whim. Her new graphic cat eyebrow designs, however, are a new development that have divided the internet.

Thin, shaved, and drawn-on brows are having a major moment in the beauty world right now so we’re all here for Doja Cat’s new passion for eyebrow line art. To celebrate her creativity, we’ve kept track of every recent design that she’s posted so far (so you don’t have to).

Earlier in the month, Doja Cat debuted her new shaved brows on the grid with thin hand-drawn lines and black hearts in the middle of each brow

The artist got experimental with color by drawing on green stems for brows with small white flowers. She complimented the look with sparkly shadow and bold cat eyeliner.

Doja Cat posted a selfie of just her eyebrows and forehead with classic yellow smiley faces in between two thin lines.

Doja Cat hinted that she is ready for apple picking season with tiny red apples drawn directly above her pupils. She zoomed into her forehead in the series of selfies, holding her hand up to her lips to show off her new aura-design manicure, as well.

We’re not entirely sure what blue creature is wrapping around (or orbiting) Doja’s line-drawn-on eyebrows but we do know it gives a futuristic effect.