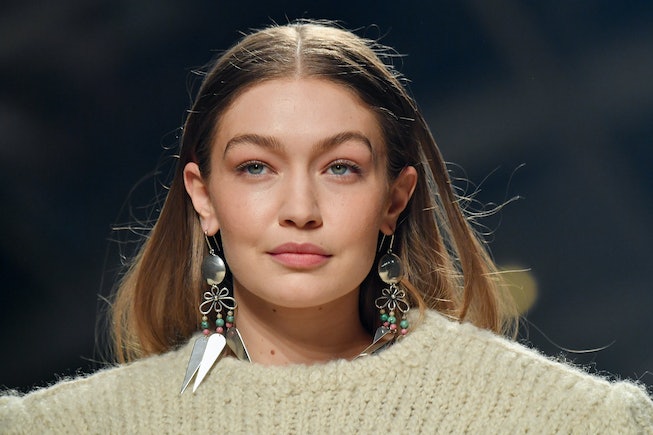 After previously revealing her skincare secrets, Gigi Hadid is now ready to inspire your WFH glam routine. For those days when you're ready to cozy up on the couch and get to the serious business of playing video games, Hadid has you covered, revealing a look that featured much longer hair.

On Wednesday, February 17, the model celebrated her latest Vogue cover with an Instagram announcement. Now starring in her very own virtual video game, Hadid shared the look she turns to when it's time to game.

As many of Hadid's recent grams have featured updos and winter-approved accessories, her current hair status has remained somewhat of a mystery. However, the new mom shared a peek in her latest gram, and her blonde hair is longer and shinier than ever. Seated in the photo, her hair, which she tucked back with a pair of cat-ear headphones, extended past her waist.

Pulling off an effortless middle part, Hadid paired the straight and down style with a coat of bright red lipstick. She kept the rest of her makeup looking dewy fresh, and appeared to wear a hint of liner.

Nearly three weeks ago, Hadid gave gram followers a closer look at her longer hair, posing for a photo that featured tousled waves. The current length is among the longest hair Hadid has recently had, as one of her last public appearances of 2020 featured waves parted to the side.

See her gaming glam, below.