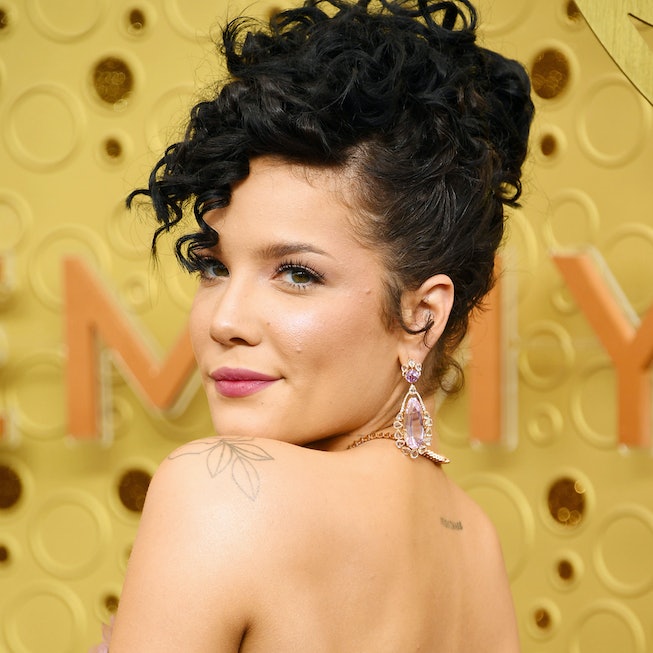 A true innovator in the world of makeup, Halsey has officially declared her support of unconventional lip colors. Fearless in her continued beauty experiments, the pop star went goth, unveiling a look that featured red hair, neon eyeshadow, and one seriously bold black lip.

On Wednesday, March 4, the founder of About-Face announced her continued adherence to a life filled with "NO DRAMA," and in celebration, she showcased a truly colorful look. Wearing a red wig which featured bangs and a soft mullet-like cut, she posed with a face of all About-Face products.

The routine featured plenty of details to take note of, including a bright yellow eye, which was outlined in a single, faint white line, and a bottom lid lined in the same shade of white and black. Her Instagram carousel also featured a close-up of her eye makeup, and it appears as if she added a few rhinestones to her bottom lid, too.

Looking beyond the striking eye makeup, Halsey chose an equally strong lip. She covered her lips in a shade of matte black lipstick, most likely using one of About-Face's most recent product launches to complete the task.

Halsey is far from the only celeb that's embraced their inner-goth with the brooding beauty color. In the past, Lorde, Rihanna, Beyoncé, and Kylie Jenner have also been spotted in similar lipstick shades.

See her look, below, and then keep scrolling for some black lipsticks you can add to your beauty routine.