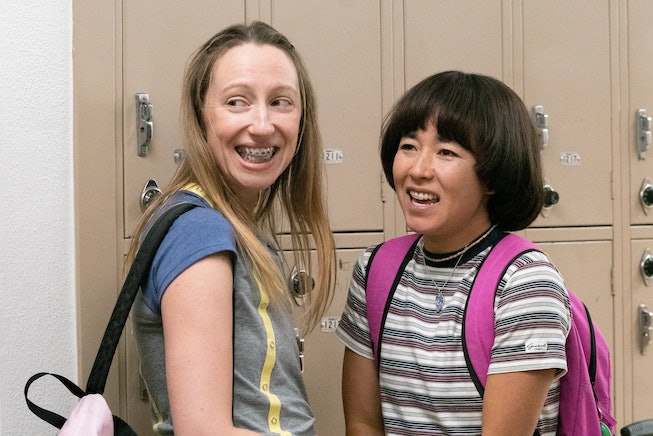 A Newlyweds-era Jessica Simpson, drugstore makeup, and glitter all played a role in creating the beauty looks featured in the hilarious second season of Pen15. The Hulu comedy returned for its second season in September, and with it, its hilarious adventures down middle school memory lane, which just so happens to be filled with every cringeworthy '00s beauty trend.

For those new to the comedic greatness that is this series, Pen15, was created by and stars Maya Erskine and Anna Konkle. Both are in their 30s, but for the series, the pair play fictionalized versions of themselves in middle school in the year 2001. The two star opposite actual teenagers, and for the show's second season, which recently premiered on Hulu, the BFFs have officially entered seventh grade.

In true middle school beauty fashion, the year comes with experiments in eyeliner, red lipstick, and looks modeled after your best friend. When it comes to encapsulating the '00s, and all its many trends, Pen15 relies on the talents of Lara Cilento, hair department head, and Michelle Miller, makeup department head. Together, the pair work to transform the show's stars into their middle school counterparts, and as they shared with NYLON, the work required scouring through Pinterest and taking inspiration from classic pop culture of the time.

According to Miller, hair and makeup was largely based on ideas provided by Erskine and Konkle. "They wanted to look like middle school rejects who tried really hard, but even when they tried, they didn’t look so good," she said. "We never decided on any look, no matter the character, without Maya and Anna’s vision."

When it came to their individual routines, Maya's look featured bushy eyebrows, facial hair, and a retainer. Miller said they glued Maya's eyebrows down, and used concealer and contour to give her face a younger look. For her hair, Maya wore a wig, but Cilento said they strived to make the hair appear as natural as possible, which meant less combing, and a more natural fall to the bangs.

For Anna, Miller used facial hair, braces, and lots of Lip Smackers; and for her hair, it was all about the extra pieces. "We give her that early 2000 texture – piecey and stringy — for her age with a tad crunch to it," Cilento said. "The 'tails' as we call her front pieces were a look of the time. They were a must when designing Anna's hair look."

Modern-day makeup products were used to create many of the looks on the series, including Tatcha and MAC Cosmetics, but Miller also relied on drugstore makeup, choosing the most unflattering shades. To get Anna's unmovable hair tails, Cilento used Hybridized Wax by Hanz De Fuko.

This season also brought hair and makeup the chance to experiment with some new looks, including one scene which required the girls to embrace their magical side. During the third episode, both Maya and Anna believe they have obtained special witch powers — as middle schoolers so often do — and their new powers came with a walk on the beauty dark side.

For the episode, Maya wore dark, heavy eyeliner, while Anna wore white eyeliner, and added a few braids to her usually straight hair. "The witch looks were my favorite because they were so ridiculous," Miller said. "I pulled images for days, of inspiration, from high fashion photos to Pinterest. It took some trial and error to nail the looks." She confirmed that both Anna and Maya had chosen their specific liner color for the episode.

The witch episode also featured a special hair moment, Cilento shared. "As much as we wanted to throw Anna into a Stevie Nicks/The Craft choker-gypsy-dark look we went with a more found objects theme for both," she said. "The two pieces they added to their hair actually came from the same leather strings, as if they rummaged through a drawer and made a hair accessory with what they found. We fashioned them how their character would have — Anna with a feather and Maya with beads. As they grew deeper into their witch play, we furthered their greasiness, and dirty level."

Admittedly, both beauty heads have a hard time picking which look from this season was their favorite, but with Anna taking on the role of a glamorous wrestler via her imagination — featuring curls inspired by Jessica Simpson — and Anna imagining her life as a seasoned actress — complete with red lipstick and hair inspired by Mrs. Robinson of The Graduate — there's was certainly no shortage of memorable makeup moments.

NEXT UP
Beauty
Jenna Ortega Embraces Emo Bangs and Eyeliner At Saint Laurent’s Menswear Show
Beauty
No One Does #PamCore Beauty Better Than Pamela Anderson, Herself
Beauty
Dua Lipa’s ’90s Updo Is Hair Inspo For Your Next Night Out
Beauty
Megan Fox Is Completely Transformed By A New Blonde Bob
Style + Culture, delivered straight to your inbox.