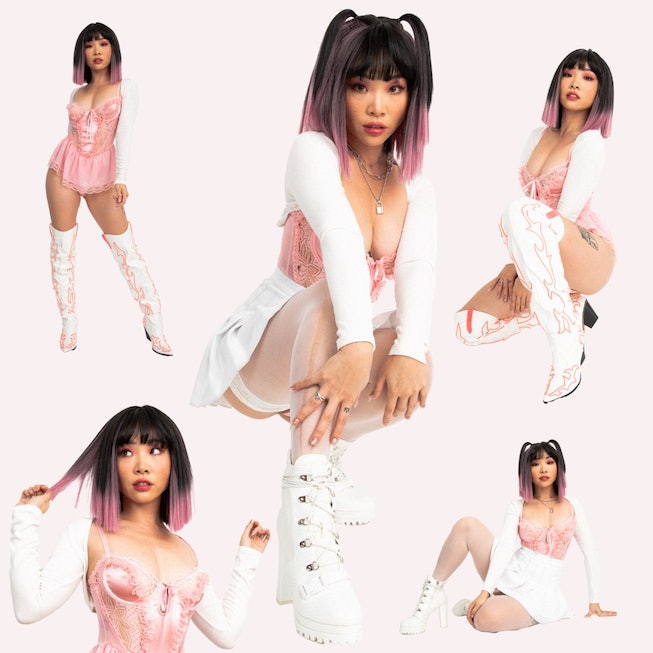 Unfortunately, life has yet to present us all with an opportunity to become a bonafide pop superstar. Luckily, for those who have spent any of the last few months dreaming of joining BLACKPINK, or admiring their every stylish look, INH Hair is here to help.

INH Hair, the brand behind celebrity-inspired hair releases, as well as wigs, hot tools, ponytails, and more, will release three new K-Pop-inspired wigs on Wednesday, January 27. Taking its styling cues from the groundbreaking beauty looks often spotted on members of K-Pop groups, specifically BLACKPINK, the three wigs allow you to temporarily swap out your usual hair routine for something way more colorful.

Starting off the trio of newness is Charlie, a 12" black/brown lob that features pink frosted tips. It's the brand's first-ever two-toned wig, meaning color is dispersed evenly throughout the hair, allowing you to wear a half-up style that features hints of pink. You may recognize the styling inspiration from BLACKPINK's "Ice Cream" collab with Selena Gomez.

The second wig, Alice, also takes its cue from BLACKPINK, particularly a bright red style that Lisa previously debuted. The 16" wig comes in an apple red coloring, and it features bangs.

For Wednesday's wig unveiling, INH Hair also released a surprise third wig. The Nikki wig, which is a 22" ice and black wig with a middle part and bangs, was inspired by BLACKPINK's Jennie. She was previously platinum blonde, and for the "Ice Cream" video, her inclusion in the tennis court scene featured icy hair streaked with black.

Decide which wig you'll be purchasing, below.