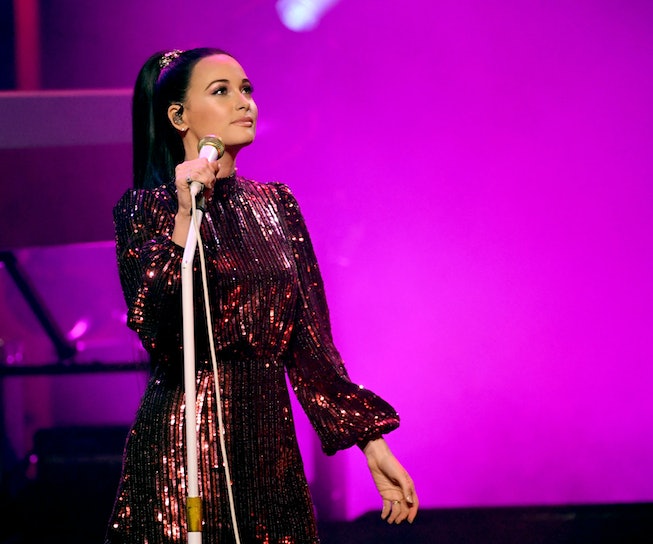 Making their debut together on the Oh What A World Tour, Kacey Musgraves and her tinsel-covered ponytail was unforgettable. Yes, the singer, and her hair, have been at the center of countless memorable moments in beauty, but her October 2019 hairstyle was a party in ponytail form, giving us all reason to ponder whether Christmas tinsel could be used for more than just decoration. In case you're still in awe of that style, and you're eager to re-create the look, Insert Name Here Hair (INH Hair) has you covered with the launch of their Musgraves-inspired ponytail.

INH Hair announced the launch of The Kasey, a clip-in ponytail that features no shortage of tinsel. The ponytail retails for $63 and comes in eight colors, including jet black and platinum blonde. As INH told NYLON, the continued use of sparkly hair products played a direct role in the creation of The Kacey. "Insert Name Here launches products that let you easily recreate trending looks at home. We noticed a ton of celebrities and celebrity hair stylists doing custom tinsel looks in hair and ponytails and thought this would be a really fun addition to our best selling ponytails," its founders, Jordynn Wynn and Sharon Pak said.

The Kacey joins previous launches from the company, including a ponytail inspired by Ariana Grande, clip in bangs that seemingly takes a style cue from Zooey Deschanel, and a popular dusty rose set of extensions.

As fans may recall, Musgraves debuted her tinsel hair during a previous live performance. Her Instagram post revealed that her hairstylist, Giovanni Delgado, was responsible for the look, and Delgado said he had used R+CO and GHD to achieve the sleek, shiny style.

Take a look at the original style, and shop the tinsel INH ponytail it inspired, below.