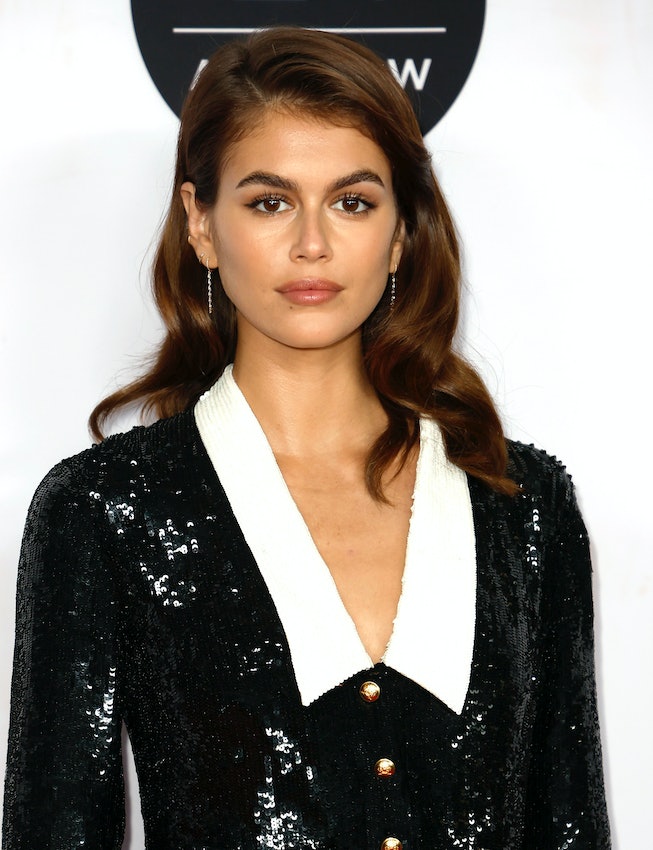 On the 2022 Met Gala red carpet, 20-year-old model Kaia Gerber has proven once again that she’s not afraid of a dramatic hair change, debuting a long, curly look. The model arrived for fashion’s biggest night in a glimmering silver dress with fringe, but it was Gerber’s brown extensions that were the main event of her look. Her now-waist-length hair curled into voluminous ringlets gave the brunette beauty an entirely different appearance. She parted her new ’do in the middle, with silver and pearl clips smoothing and coiffing the top of her hair, giving the brushed-out curls a pigtail-like effect.

The theme for this year’s Met Gala is America: An Anthology of Fashion and the dress code given to guests was officially “Gilded Glamour.” Here, Gerber is clearly paying tribute to ’70s and ’80s disco glamour (when the hair styles were competitive with even Gerber’s extreme ‘do). It also makes for a huge a change from her usual collarbone-length glossy brown hair with a slight natural wave. Gerber wore glittery eye makeup with a subtle cat-eye eyeliner win, brushed up eyebrows, and a peachy lip.

Gerber has never been one to shy away from a hair change — in the past, she’s tried pink and even platinum hair colors and has changed up her hair length along the way — but has been rocking a mid-length hairstyle for a while now. After iconically chopping her hair into a short swooping bob (she called it a “drama cut”) in 2019, the model has mostly kept the same style. However, at the end of last year, Kaia opted to switch it up by getting bangs.

While it’s clear that Gerber’s latest hair change is only temporary, we hope she brings out the curly hair extensions more often, after proving her true versatility. We also want to find the antique-looking hair clips for ourselves — a new summer hair trend, perhaps?