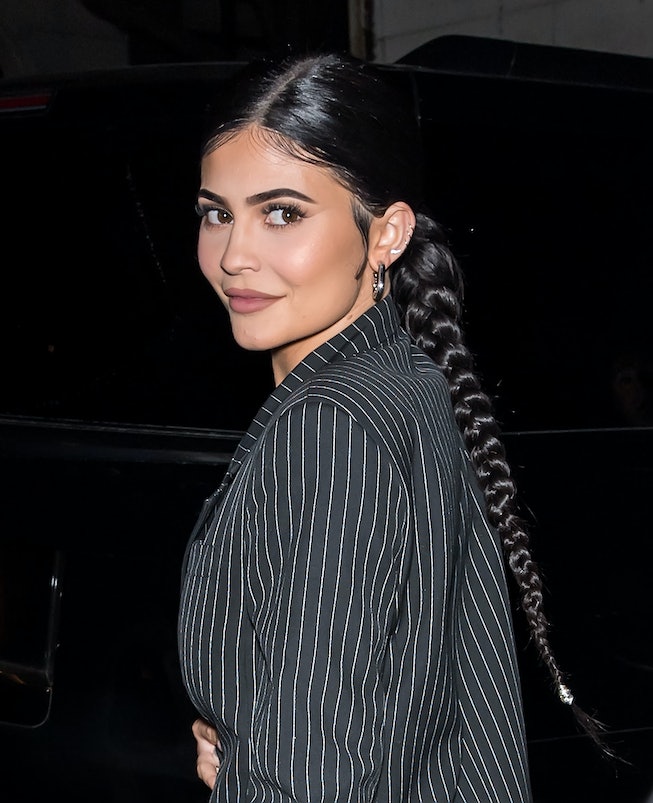 A summer of hair color experiments continues for Kylie Jenner. Days after debuting a platinum blonde hairdo, the Kylie Cosmetics founder switched up her hair color again, choosing a shade of a bubblegum pink.

Following quarantine hair that included ditching the extensions and going natural, Jenner matched this newest color to her Snatched shade of High Gloss. The style was parted down the middle, and as Allure notes, the choice of color appears to be inspired by a fan.

Likely donning a wig, Jenner made the switch after sharing fan art that featured her with pink hair. For the image, Jenner's recently dyed platinum blonde hair was altered to look pink. It was shortly after sharing te post that Jenner revealed the new color, which also matched the pink decorations used for Khloé Kardashian's birthday bash, Allure reports.

In addition to a short video posted on her page, Jenner posed for a few Story selfies, including one that featured a French tip manicure. Sharing the picture on her Instagram, Jenner captioned the photo with a matching pink heart emoji and a star emoji.

It's unclear whether Jenner will be sticking with the pink shade, but she had hinted that a return to her platinum blonde hair was imminent. And this wouldn't be the first time that Jenner had tried out a pastel shade. In addition to wearing a long lavender wig at the 2018 Met Gala, she had dyed her hair a shade of pastel pink in 2018 with the help of hairstylist Chris Appleton. To get the previous color, Appleton shared his dying process with Instagram, revealing that he used Lime Crime's Unicorn Hair Dye in Kawaii. There's no word on what this latest pink process entailed, but with summer only just beginning, it's likely this won't be the last new color you see on Jenner.

NEXT UP
Beauty
Kylie Jenner Is Bringing 1920 Finger Waves to the 2020s
Beauty
The Best Beauty Looks From The 2023 Grammy Awards
Beauty
Bella Hadid’s Clip-less Updo Is Going Viral On TikTok
Beauty
No One Does #PamCore Beauty Better Than Pamela Anderson, Herself
Style + Culture, delivered straight to your inbox.