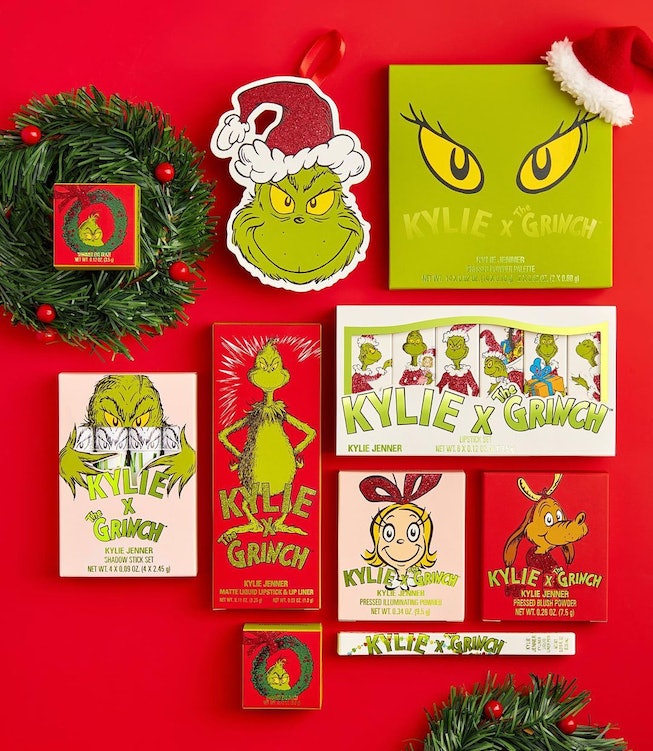 'Tis the season for holiday-inspired beauty launches, and Kylie Jenner has announced the details of her annual holiday Kylie Cosmetics launch. Teaming up with one of the season's most notorious characters, Jenner unveiled a brand new Kylie Cosmetics collection inspired by the classic Dr. Seuss tale, How The Grinch Stole Christmas.

Officially arriving to KylieCosmetics.com on November 19, the Grinch-inspired launch is as packed full of goodies as the annual Whoville feast. Teasing the launch via her Instagram Story on Friday, November 13, Jenner walked through every product in the collection, including a bright red How The Grinch Stole Christmas lip kit and two Grinch high glosses.

Lip products aren't the only featured items in the launch, as Jenner also confirmed the arrival of a new eyeshadow palette. Packaged in a Grinch green box, the 12-pan palette comes with mattes, shimmers, and pressed glitters. Each color is named for a moment or character from the story, and while there is plenty of green, Jenner chose to make the shade more wearable in nature, and she paired it with nude and neutral colors.

Additional new products include a highlighter and blush, a set of eyeshadow sticks, shimmering eye glazes, a lipstick set, and liquid liner. Over on her Instagram, Jenner reported that this marked her fifth holiday collection, writing, "Probably the most excited about this one than i’ve ever been."

The news of a holiday collections follows previous 2020 releases from Jenner that included a summer collection, which featured the debut of Kylie Cosmetics lashes, a joint collection with sister, Kendall Jenner, and her On the Wild Side collection.