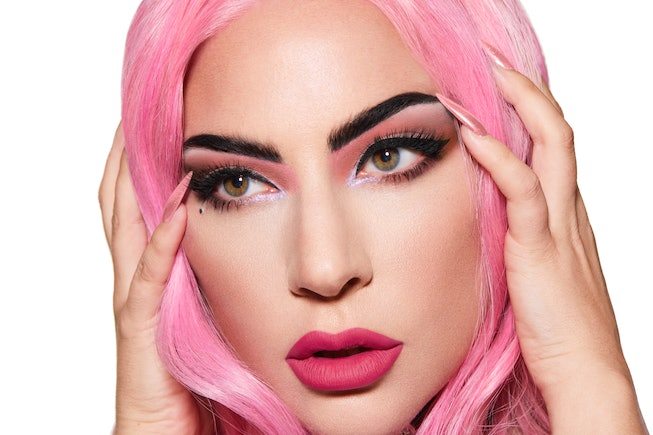 After previously announcing that all future Haus Labs makeup releases would be postponed, the brand announced its newest product, and it's arriving just in time for your first listen of Lady Gaga's new album. On May 19, Haus Labs will release the Stupid Love eyeshadow palette, which is directly inspired by Lady Gaga's upcoming new album, Chromatica.

Back on April 21, Haus Labs announced it was delaying the release of new shades for its Le Riot Lip Gloss and Rip Lip Liner, saying that the brand intended to focus its efforts on helping in the fight against COVID-19. Haus Labs has since announced its return, sharing an Instagram post detailing the launch of the 18-pan palette that will retail for $48; so far, there's no word on a possible new date for the lip shade launches.

Available online through Amazon and Haus Labs, the palette feature matte and shimmer shades, including hues of metallic lavender, a black with multi-color sparkle, and a matte pale pink. The cool and warm tones are meant to be used together, creating looks that clash, but coordinate.

In a press release, Sarah Tanno, makeup artist and global artistry director of Haus Laboratories, explained the idea behind the palette "Within the different color waves, there are chromatic versions of the shades for you to try monochromatic looks and experiment with color blocking, with versatility of the warm and cool tones," she said. "With color, there are no rules, and if you feel like there are, break them! We want to empower you to feel like you can try something that you never had the confidence to do."

The palette will be released ten days before Lady Gaga's sixth studio album Chromatica arrives, and she's already celebrated the newest Haus Labs product on Instagram. Sharing a photo of her Stupid Love look, she confirmed news of the product's launch and its May 19 release date.

Plan your future Lady Gaga-inspired looks accordingly with a look at the palette, below.