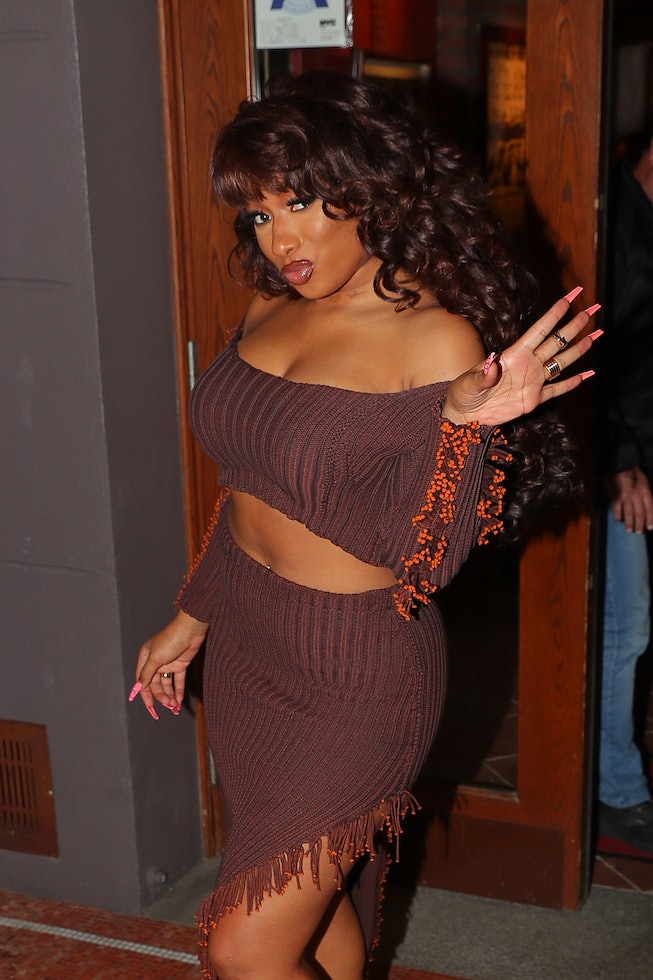 If there’s any celebrity that knows how to nail (pun intended) the art of the themed manicure, it’s Megan Thee Stallion. She’s also a noted Halloween lover, keeping up a tradition of posting Instagrams of herself going about her daily activities while wearing a Jack-o’-lantern over her head—so we’re always on the lookout for her next spooky seasonal manicure. Last year, the superstar got three Halloween-themed manicures in one week and this year she’s already started the season with a bang with bug nails and black smoky french tips. Megan’s latest nail art is even more overtly Halloween ready. October 24 on her Instagram, Meg revealed a fresh set of painted pumpkin nails.

Megan posted her new orange and black manicure in a series of selfies captioned “Hotties Y’all ready for something super cute? 💞”. In the photos, she’s wearing a pink shirt that says “bad bitches have bad days too” and holding her nails up to her chest. To complete the look, she wore a pink, orange, and blue knit hat, a gold and black smokey eye, perfectly lined lips with gloss, and diamante hoops. Her pet iguana “Billiam” also made an appearance in the last photo of her photo dump.

While Megan’s hotties were in her comments looking to buy her pink shirt (including fellow celebrity Chloe Bailey, who commented “i want this shirt”), other fans were quick to notice Megan’s new nail art. “The orange nails omgggg,” wrote one fan. Megan’s pumpkin manicure included orange french tips with a black dripping center, adding an extra spooky edge on her signature long, coffin-shaped nails.

Megan has never been one to shy away from an over-the-top manicure, including light-up nails in August this year. She’s also always one to bring it for Halloween, kicking off her celebrations at the start of October. With her “Hottieween” party coming to Los Angeles on Saturday, October 29th, this season is once again Megan’s moment— and we’re just living in it. Her latest pumpkin manicure is no doubt just one of the multiple spooky nail art ideas to come.