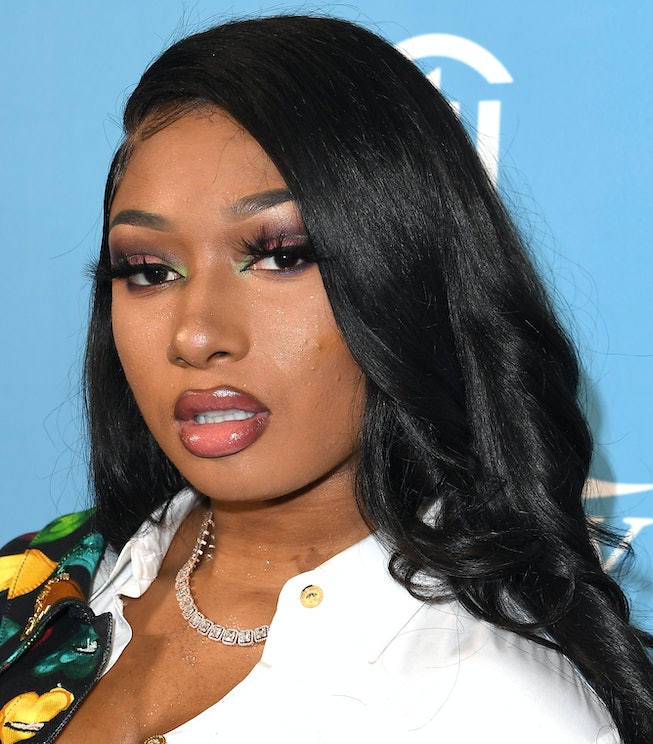 Megan Thee Stallion changed things up over the weekend, unveiling a dramatic switch up in hair color. While the rapper is known for making frequent changes in color, it's been quite some time since she's shared in a new look with fans that took its inspiration from all things early '00s.

On Sunday, September 6, Thee Stallion casually posed for a selfie in the sun that showcased her new, bright blue wig. The pastel shade of blue was apparently inspired by the ocean, as she captioned the photo with, "wavy" and a dolphin emoji. In keeping with her choice of color, the newly named Revlon ambassador chose both a purse and hair accessories in similar shades of blue. In one photo, she shared a close-up of her beauty routine, which featured sky-high lashes and a glossy lip. Below her eye, there also appeared to be a set of two blue dots.

Along with her striking choice of color, Thee Stallion sectioned her hair into knots, which she held together with the help of sparkly blue hair clips and pins. The performer didn't divulge whether her island getaway — or Gwen Stefani — had served as the inspiration for her new color, but just days later, her dark, natural hair returned. Followers were definitely here for the look, writing, "U betta give me Gwen" and "ethereal."

As fans of Thee Stallion know, this wasn't the first, and likely won't be the last, time that she tries out a new hair color. For the "WAP" video, she tried out a striped wig, she chose a rainbow wig for Pride, and for past appearances, she had pink hair and a two-toned dye job.