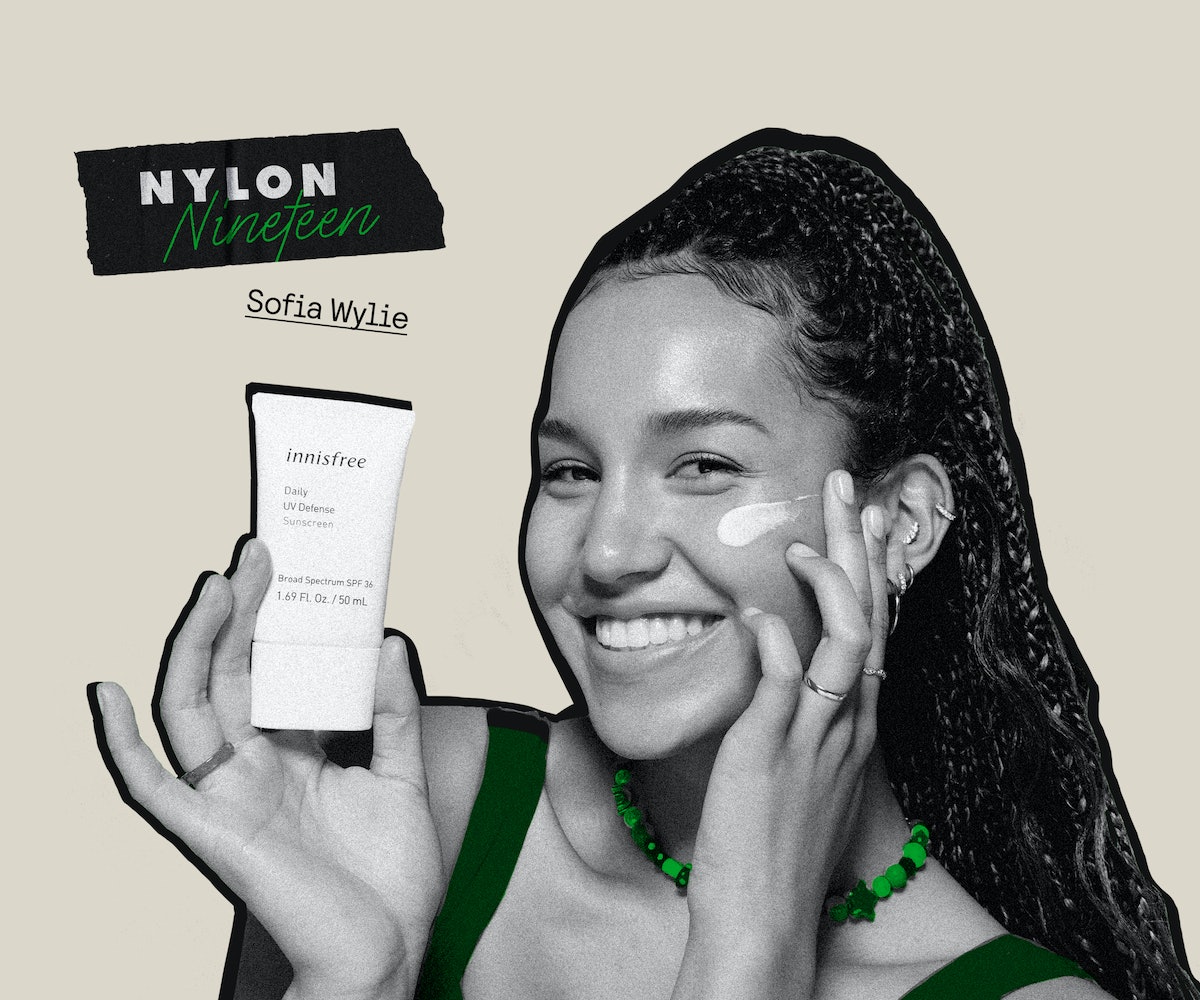 Sofia Wylie is best known as High School Musical: The Musical: The Series’ resident mean-girl-gone good. As the series approaches its third season, debuting on July 27, however, Wylie wants you to know her character is not yet done growing. “In season three, I think there's a really different energy to Gina and you get to see so much more depth to her,” says Wylie. “She's very excitable this season, where in the past she's been quite sad.”

While she’s a notable triple threat on HSMTMTS, that’s still not that’s not the full extent of Wylie’s interests and creative impulses. Also an avid beauty lover, she’s also dipping a toe into the space and partnering with with skin care brand Innisfree for the launch of their UV Defense Broad Spectrum SPF 36. “It’s so personal and exciting to me because Innisfree is a Korean beauty brand and I'm actually part Korean — a lot of people don't know that,” explains Wylie. “I've grown up with a lot of Korean influences in my life, the skin care is something that I've always used and loved, Innisfree is brand that I have grown up using, it just felt like such a fit.”

Later this year, people will get to see the actress in an entirely new light once her new film The School For Good And Evil (co-staring Charlize Theron and Michelle Yeoh) comes out on Netflix this fall. “We filmed in Ireland, and it's been over a year since I filmed it, so I'm excited for the movie come out and for everyone else to see it.” she says. “It's always challenging to play something different, but I had so much fun with it. I'm eager for people to be able to just see me in a different light as an actress.”

NYLON caught up with Sofia for her take on the NYLON 19, and dish on everything from the movie she can recite to the most-worn item of clothing in her closet.

1. Who would be the three headliners of the music festival of your dreams?

Oh gosh. I think Benny Sings, Rex Orange County and hmm, I feel like some country artist, because I do have a very secretive love for country music. Maybe Maren Morris.

2. What was your first concert and what were your memories of it?

My first concert was actually a Justin Bieber concert on his Purpose tour when I was 10 or 11. It was the first concert I went to because I was dancing with him. He was doing this thing where in each state he would pick three or four dancers to dance with him for one of his numbers or one of his songs and I got picked to perform with him in Arizona, in my hometown. I really didn't get to have fun at the concert because the whole time my heart was just racing and thinking about the fact that I was going to be on that stage and then the rest of it was a blur.

3. If you could be in any music video, what one would it be?

I would be in any Beyoncé music video just to dance beside Beyoncé. But “Single Ladies” for sure. I grew up watching that a million times over.

4. What was your favorite movie as a kid?

My sister and I loved this movie called Master of Disguise — it is one of the funniest movies I've ever seen. I just watched it recently with a friend and it still holds up and I realized that I know basically all the words to every scene. I didn't even know I could do that.

5. What’s the weirdest nickname you have?

6. What is your favorite meme or internet joke and why?

I don't actually look at memes. I definitely go on TikTok and I see all of those, but those trends are so fleeting and so fast. I have seen little memes of the ones that people have made of the show. I love seeing anything that fans of the show create because I think it's just like, "Wow, people watch this and care about it enough to create something off of it.”

7. What is your favorite red carpet look of all time, worn by someone else?

I think one of my favorites was Zendaya at the Met Gala [in 2017]. She had this beautiful yellow floral dress on and her hair was really big down Afro style but long. She holds so much power.

8. Do you have a secret talent?

Sadly, no. All of my talents are pretty much out there!

9. What is one thing everyone should buy or have that's under $10?

I think a book. Everyone should have a book. But books are so underrated and I definitely, there's such a humongous book community, but there are so many of my friends just don't understand how incredible books can be. You can buy them for so cheap and they are the best companion to have. You can read them over and over and over again. They don't lose battery. They're just perfect. A perfect companion.

It's honestly more of a love song, but anything that has to do with love makes me sad in a very sweet way. I've been listening to “To the Bone” by Sammy Copley.

11. What reality show would you most like to appear on?

I am not going to lie, I love Are You the One? I think I would love to see what it would be like to try and find my perfect match in a group of strangers.

12. In the morning, what’s the first thing you look at on your phone?

The Bible app. I like to start off my morning with a devotional or a bible verse.

13. What is your best beauty tip or trick?

I always put on a face mask on 15 to 20 minutes before I get off of a flight. I have very acne prone skin, so I know the second I get off of an airplane, I’m going to have three or four more pimples. But when I discovered using a face mask to help nourish my skin, I seriously don't get pimples after flights anymore.

14. What is the most-worn item of clothing in your closet?

My sister got me these straight legged sweats from Brandy Melville and I wore them so much that she got me two more in the same style, but different colors. And then I wore those so much that she got me three more pairs in different colors. I now have probably like six or seven of the same pants and they are all falling apart because I literally wear them to bed, to anything else in the day. I don't take them off.

15. What is the weirdest snack that you make?

I do love weird combinations with cottage cheese. I like cottage cheese with some sort of fruit, like canned peaches. It’s such an old people thing to eat, but it's so yummy.

16. What is something you use every single day that's not your phone?

My shower, for sure. I'm a little bit of a germaphobe. So I probably shower twice a day, just because I always love the feeling of being clean

17. What’s your favorite expression or quote?

“This too shall pass.”

18. What’s your favorite city in the world and why?

Scottsdale, Arizona! My home! Never felt so at peace anywhere.

19. What’s something that you recently changed your mind about?

What I wanted to eat for dinner.