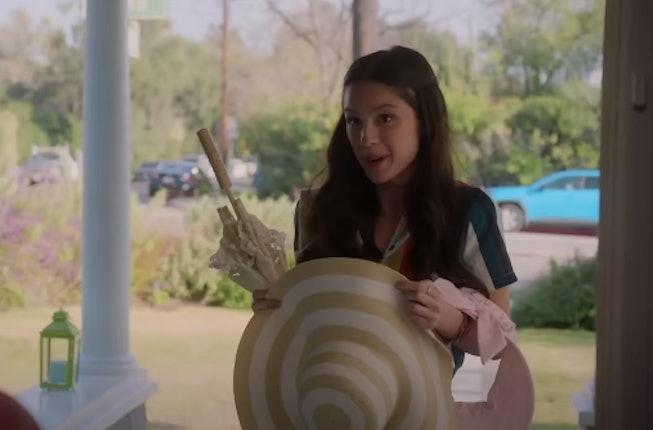 The students of East High are on summer break and they’re heading to camp in season three of High School Musical: The Musical: The Series.

In the next chapter of Disney+’s popular mockumentary, the Wildcats are attending Camp Shallow Lake to meet a special celebrity guest. Corbin Bleu appears, as himself, in the first teaser for the show, to surprise the students. Soon after they arrive, he reveals their camp has been selected to put on a production of Frozen and it becomes their mission to make it their best show yet.

Nickelodeon star JoJo Siwa is joining the cast for season 3, along with Modern Family actor Jessie Tyler Ferguson. According to Entertainment Weekly, Siwa is starring as Madison, a Camp Shallow Lake alum, while Ferguson will play Marvin, a friend of Nini, who’s played by Olivia Rodridgo. (Rodrigo, of course, got her start on HSM, with her breakout single “driver’s license” being about her co-star Joshua Bassett.)

The past two seasons of High School Musical: The Musical: The Series, have tracked the lives of East High's most talented performers at they navigate their burgeoning careers and personal lives. After two semesters of drama and show-stopping performances, it seems all their storylines are coming to a head for season three. Nini anticipates the group's fate while preparing for the new productions, “it feels like these last three years have been leading up to something big,” she says. Meanwhile, Gina, played by Sofia Wylie, steps out of her comfort zone for a summer of “firsts” — her first camp, first boyfriend, and first time “really” trying to get the lead in the musical.

And as they navigate their own hardships, the school's leading man, Richard, played by Joshua Bassett, is humbled when he hast to earn his spot on stage. Camp Shallow Lake is full of talented performers, and if he wants a lead role it seems he’s got some hard work ahead of him. “You can’t just Zefron your way through auditions this time,” his friend, Carlos, warns.

It’s shaping up to be an interesting summer for everyone involved. As Julia Lester’s character, Ashlyn, expertly states, “the stakes have never been higher.”

Season three of High School Musical: The Musical: The Series, premiers on July 27th. Until then, check out the trailer below.

NEXT UP
Culture
Phoebe Dynevor Will Not Return for Bridgerton Season 3
Culture
Succession Season 4 Trailer Explodes With Family Drama
Culture
The Biggest Revelations From The Price Of Glee Docuseries
A Night Out
A Night Out With Rachel Bilson
Style + Culture, delivered straight to your inbox.