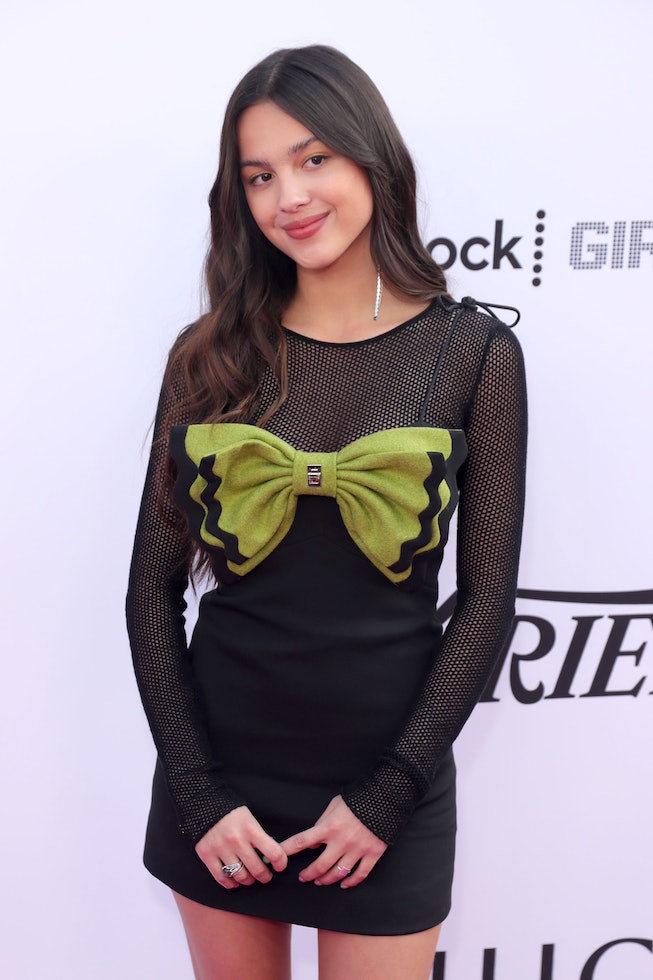 This time last year, Olivia Rodrigo attended the Brit Awards as a breakout star, following the release of her first hit song, “Driver’s License”. Now that she’s achieved full superstar status, she returned this year to collect the International Song of the Year Award for another one of her mega hits, “Good 4 U”. The award follows the announcement that Rodrigo is set to be honored as Billboard's Woman of the Year.

But if there’s one thing we like seeing Rodrigo honored for her accomplishments, it’s what she wears to accept the awards. Rodrigo is quickly becoming known for her red-carpet looks, from sequined dresses to sophisticated up do’s. She’s also secured herself as a Y2K revival style icon. Her “Brutal” music video, featuring nostalgia-heavy pieces like butterfly clips, pink clip-in highlights, and gothic chokers, has inspired 2000s era enthusiasts everywhere. Rodrigo continued dipping into the well of nostalgic trends for the Brit Awards. For the February 8 ceremony she wore a very ’90s shade of brown lip liner paired silver eyeshadow (to match her shimmering Alexandre Vauthier dress) and precise cat-eye eyeliner.

In the 1990s, chestnut-colored lip liner with lip gloss was a staple among supermodels like Cindy Crawford and Naomi Campbell. Dark lip liner mostly dropped off the scene in the following decade, until Kylie Cosmetics Lip Kits entered the scene in 2015. The 2010s version of lip liner was mostly seen overdrawing the lips and being matched with a corresponding liquid matte lipstick. But these are not the first times lip liner has been popular, lip liner has long been a staple for women of color in Black and Latinx communities, long before and after it was “trending”. Now, that the world is obsessed with all things ’90s and Y2K, the beloved high contrast lip liner and gloss combo is officially back.

Rodrigo kept the same lip liner and eye makeup for the Brit’s afterparty but switched up her long wavy hair with two face-framing baby braids. While she didn’t perform this year, Rodrigo has once again proven that she’s becoming a master of the effortlessly nostalgic red carpet looks. We can’t wait to see where she rocks her new favorite lip liner look again.

NEXT UP
Beauty
The Best Beauty Looks From The 2023 Grammy Awards
Beauty
Doja Cat Wore Over 30,000 Crystals To Schiaparelli’s Couture Show
Beauty
Charli D’Amelio and Landon Barker Wore His & Hers Goth Manis To The Grammys
Beauty
This Hailey Bieber-Approved Blush Now Comes In 4 New Shades
Style + Culture, delivered straight to your inbox.