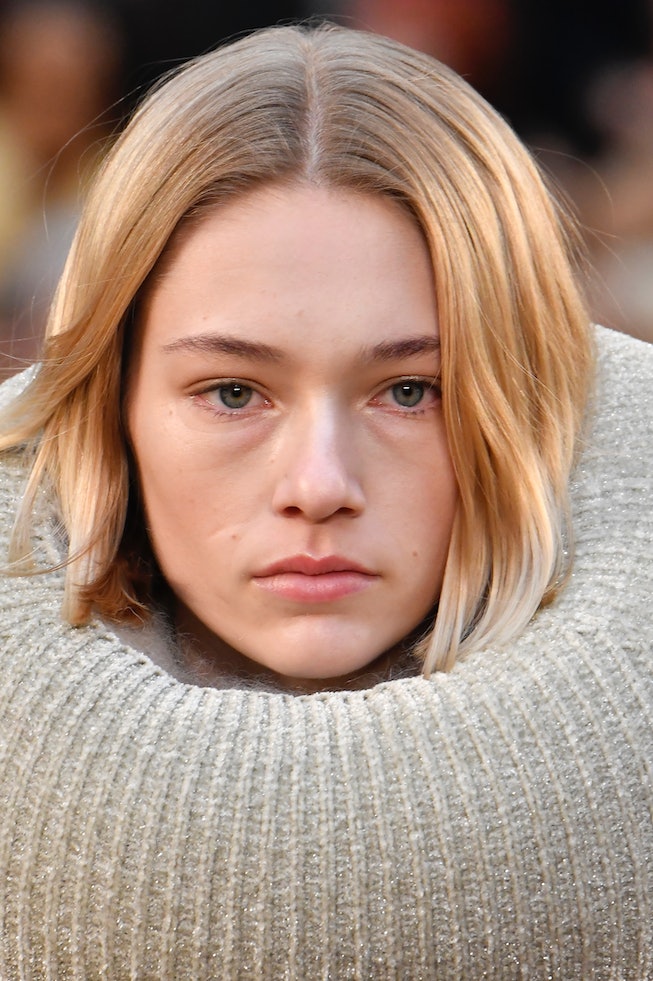 Remember the TikTok under eye circles trend? The one where creators actually added dark circles under their eyes to look more tired, at the end of 2020? Just over a year later, the bizarre internet phenomenon has hit the runway, with dark under eyes officially becoming this year’s (un)makeup mood according to Paris Fashion Week last week. Across multiple shows, makeup was minimal and dark circles were embraced, rather than covered up.

This year, it seems there was no under-eye concealer to be seen backstage at Chloé, where make-up artist Hannah Murray left Amber Valetta barefaced. “Too much concealer changes the shape of your face – you lose dimension,” she told Vogue. The theme continued throughout Paris Fashion Week, with concealer-less faces seen at Anne Isabella and Meryll Rogge presentations. Dark circles also made a statement at the Loewe and Dior shows. At Dior, however, makeup artist Peter Philips even accented otherwise bare under eyes with a dash of highlighter in the inner corners of the models’ eyes using the Dior Backstage Glow Face Palette.

While the chic French version of the under-eye trend is far more subtle—and low effort—than its previous TikTok counterpart by simply leaving your eye bags bare rather than drawing more on, they both point to a possible new era of post-wellness beauty. In contrast to the “clean girl” aesthetic which has grown in popularity as of recent, eye bags are yet another throwback to the ’90s and early noughties, where the hard-partying aesthetic dominated fashion, and being tired (and most likely hungover) was expected from supermodels.

With grunge beauty coming back overall (hello, Robert Pattinson's recent GQ cover), it’s a welcome change to the previous flawless standard. The minimal makeup look is also in direct opposition to the maximalist Euphoria-influenced makeup trends that have been dominating this early part of 2022. While we still love a full face of makeup and glittery cat-eye eyeliner, consider Paris Fashion Week your runway-approved permission to embrace your dark circles, lean into your days without any makeup at all, and (for those brave enough) throw away your concealer altogether.