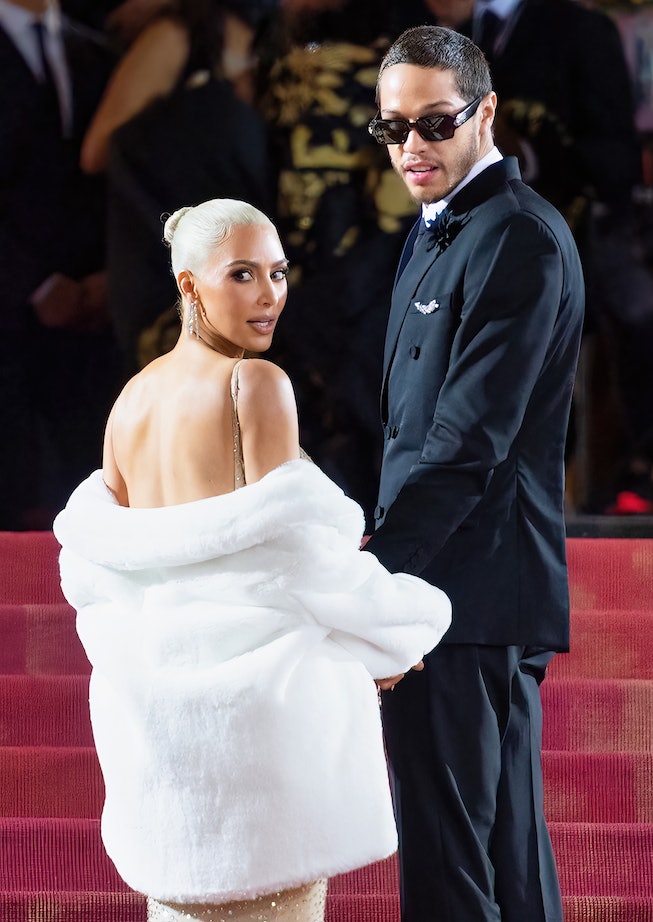 Since going Instagram official earlier this year, Kim Kardashian and Pete Davidson have been steadily giving us more and more of a behind-the-scenes look into their relationship and shared lives. Initially, they kept their relationship private online before doing soft-launch relationship posts with a shadowy male figure and then more couple-y vacation photos. Kim just posted their most PDA-post yet yesterday on Instagram, and eagle-eyed fans have already spotted a brand new Kim-inspired tattoo on Pete.

Pete’s latest ink is a small script lettering of the words, “Jasmine and Aladdin” beside an infinity sign on his right shoulder. The new tattoo is clearly a reference to Kim's Saturday Night Live hosting performance, where the couple cosplayed as Jasmine and Aladdin and kissed on camera. Kim later shared, during an episode of The Kardashians, that that on-air kiss sparked her romantic interest in Pete. "When we kissed in-scene, it was just a vibe," she said. "And I was like, 'Oh sh*t, maybe I just need to try something different.'"

Clearly a pivotal moment in their budding relationship, the SNL reference isn’t the only tattoo that the comedian and actor has gotten in dedication to Kim. While appearing on The Ellen DeGeneres Show, Pete revealed that he got Kim’s name branded on his chest as a sign of his devotion. He also has “my girl is a lawyer” written on his collarbone. While Kim has no relationship ink (yet), she did dedicate a far more temporary manicure to Pete in May, featuring a rhinestone letter “P” on her ring finger.

It’s obvious that Pete is a fan of getting tattoos — with most of his body covered in them — so we should expect that this latest ink won’t be the last of the tattooed couple content. We’ll just have to wait for the next PDA photo dump to spot any other sentimental relationship moments that Pete would like to immortalize with ink.