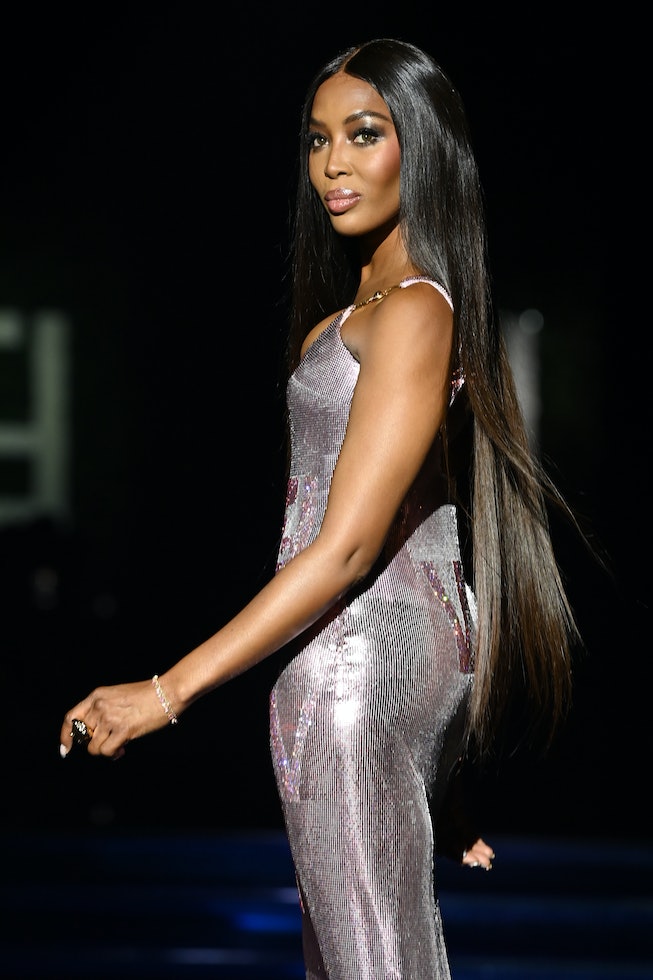 Remember how flat straight hair was in the early 2000s? The likes of Avril Lavigne and all of our favorite teen queens would wear the style with nary a crease or a hair out of place. The rest of us might have flat-ironed our hair until our ends were almost burnt to a crisp and the face framing pieces snapped off. Split ends had no place to run, no place to hide. Plus, you could never quite reach the center back of your head. Well, from the looks of Milan Fashion Week, that level of vertical hair is back, with Versace spearheading the trend and solidifying the poker-straight hair look.

It’s very little surprise that the nostalgic trend is making a reappearance. Slowly but surely, y2k hair has been making a comeback one trend at a time, including chunky streaks and spiky up-dos. However, this one requires you to turn up the heat. With our knowledge of hair and technology vastly improved over the past 20 years, the look is now a little different with a premium put on hair health and shine. Get your flat irons and heat protectant spray ready. Super straight hair is back.

At the surprise Fendace show (that’s Fendi x Versace, to you), Naomi Campbell, Gigi Hadid, and Emily Ratajkowski all walked the runway with super long, super straight hair. The looks were created by hairstylist Guido Palau using various wigs and hairpieces. Additionally, Emrata was styled wearing a bandana, another hair staple of the early 2000s.

Then there was Dua Lipa’s runway debut for Versace, featuring long, straight hair with mirror-esque shine. Demi Moore also styled hair long and pin-straight, as is her signature style, to the Versace show (albeit off the runway). All together, the hairstyle translates effort and extravagance– it’s the opposite of air-dried or woke-up-like-this hair.

It was only a matter of time before the defining, early noughties straight hair trend made a reappearance but (thankfully) this time it calls for a silky and smooth rather than fried and frizzy finish. With that in mind, alongside your straightening irons, it’s time to invest in hair growth and smoothing treatments. And if you’re looking for mermaid-length hair like on the runway, it’s probably easiest to just throw in an extension or two.

NEXT UP
Beauty
No One Does #PamCore Beauty Better Than Pamela Anderson, Herself
Beauty
Doja Cat Wore Over 30,000 Crystals To Schiaparelli’s Couture Show
Beauty
Bella Hadid’s Clip-less Updo Is Going Viral On TikTok
Beauty
Dua Lipa’s ’90s Updo Is Hair Inspo For Your Next Night Out
Style + Culture, delivered straight to your inbox.