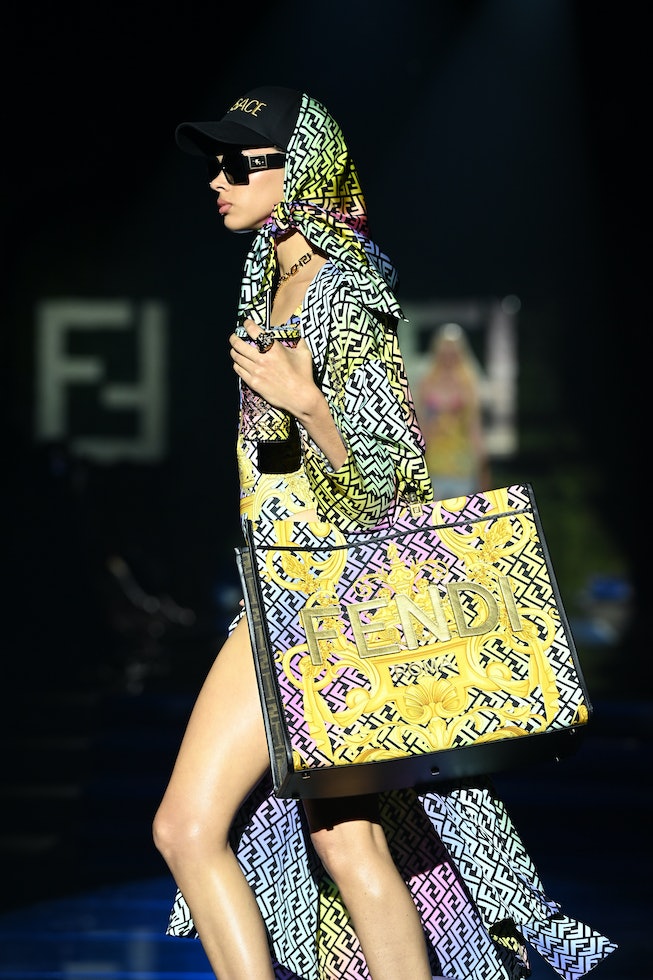 After less than a week of speculation and rumors, Italian fashion houses Fendi and Versace joined forces for the ultimate designer collaboration, also known as “Fendace,” which made its debut at Milan Fashion Week.

On Sunday, Sept. 26, creative directors Donatella Versace and Kim Jones swapped their leading roles at Versace and Fendi, respectively, and designed their very own takes on the brands’ signature pieces and motifs. The collections were revealed with a supermodel-studded runway cast, including Naomi Campbell, Kate Moss (and her daughter Lila), Amber Valletta, Gigi Hadid, Adut Akech, and more.

The show was split into two segments — “Versace by Fendi” and “Fendi by Versace” — and Jones took inspiration from Versace’s mid-to-late ‘90s era. Meanwhile, Donatella revamped Fendi with her own glam-meets-rebel aesthetic, as she incorporated more punk elements into the fashion house’s looks, bringing in safety pins, crystal-embellished pieces, and lots of lace. The designer collections also explored the concept of duality between the brands’ codes, as seen in the fusing of the Fendi “FF” monogram with Versace’s iconic Greek Key motif on a Fendi baguette bag and chunky gold jewelry.

The front row at the highly-anticipated event was also filled with famous attendees, like Dua Lipa, who recently made her runway debut at the Versace Spring 2022 show, Iris Law, Zoey Deutch, Demi Moore, and Evan Mock, just to name a few.

“It’s a first in the history of fashion: Two designers having a true creative dialogue that stems from respect and friendship,” said Donatella in an official statement. “ It led to us swapping roles to create these two collections.”

Earlier this year in April, however, Gucci and Balenciaga also partnered up on what their own creative directors dubbed a “hacking lab.” The collection debuted during Gucci’s “Aria” collection runway show and featured Alessandro Michele “hacking” into Demna Gvasalia designs, some of which include both Gucci and Balenciaga logos and a mashup of their signature aesthetics for their respective fashion houses. Plus, Christian Lacroix and Dries Van Noten have linked up before, and Jean Paul Gaultier has started to feature a rotating cast of designers for its collections, including Sacai and, soon, Y/Project and Diesel artistic director Glenn Martens. Moncler has also tapped a slew of fashion names to offer their own expertise towards its signature puffer outerwear, including Richard Quinn, Simone Rocha, and Valentino’s Pierpaolo Piccioli, among many others.

With Fendi and Versace also on board with this type of fashion experiment, could this be the next wave of even more designer partnerships to come?

You can check out the full video, and also some of our favorite looks, from the Fendi by Versace (or Versace by Fendi) collaboration, below.