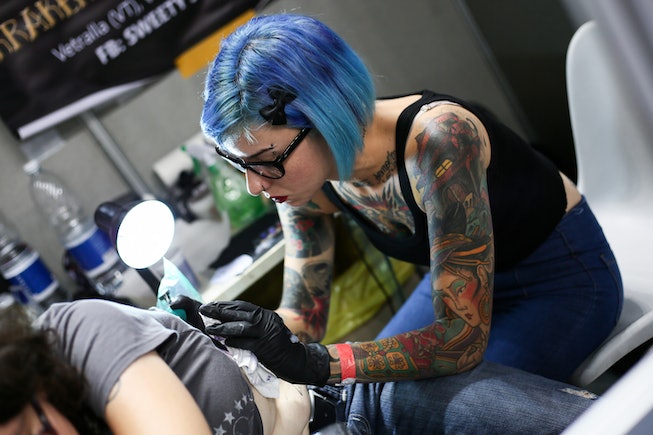 It’s difficult to believe that just over a decade ago you would have been hard-pressed to find a tattoo artist who could successfully ink an anime tattoo on your skin, especially with social media feeds flooding with anime-style and anime-related tattoo art these days. But amid the anime renaissance the world is having at the moment, and with over 800 million views on the #animetattoo hashtag on TikTok and 1.1 million posts on Instagram, there’s an endless fountain of inspo when it comes to anime tattoo ideas, from Studio Ghibli and Demon Slayer tattoos to Sailor Moon, Cowboy Bebop, and Pokémon ones.

The rise in anime tattoos no doubt comes in part due to the increase in popularity and consumption of anime worldwide. Of course, anime has been a part of heavyweight subculture for decades now, but with the broadened accessibility to anime through major streaming platforms and TV networks in the U.S. and other countries outside of Japan, more people are being introduced to and watching anime than ever before.

In 2020, the global anime market size reached $22.6 billion, and is predicted to be worth around $48.3 billion by 2030, according to Precedence Research. So it should come as no surprise that as more eyes take in the skilled art and compelling stories that make anime so killer, more people will become fans and it will influence culture, fashion, and self-expression.

As with all pop culture tattoos, there definitely has to be a level of devotion or appreciation to want one in the first place, whether that be driven by die hard fandom, emotional connection and meaning, or purely aesthetic appeal (aka you like the way it looks). As the demand for anime tattoos has grown, so too has the skill and specialization of tattoo artists. Drawing and tattooing anime is a highly technical feat, as anime is an art form in itself. It’s like requesting that someone ink a Van Gogh or Monet painting on your arm — which some tattoo artists actually do now. Even if an artist is replicating an exact image, it’s tough when it comes to clean lines, complicated shading, and solid colors to accurately represent anime well. The good news, though, is that there are plenty of talented tattoo artists who can do anime tattoos no problem. And artists including Hori Benny and Michela Bottin Ackerman have trailblazed the art before it became more mainstream and cool.

Whether you want something that is subtle or in your face, cute and colorful or intense and monochrome, a specific character or a still from a scene, the options for anime tattoos are endless. To help with inspiration for your next piece of body art, NYLON compiled 33 anime tattoo ideas, below.