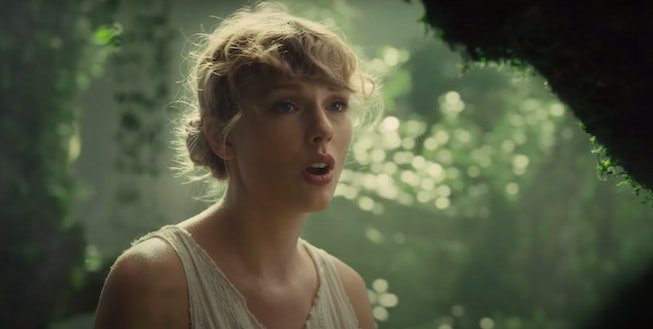 Only hours after announcing the release of her newest studio album, Folklore, Taylor Swift had given fans the first visual peek of her work. News of a new Swift video is reason enough to celebrate, but this particular clip was especially meaningful given its circumstances. Shot during the ongoing COVID-19 pandemic, Swift was forced to limit her staff, and for the "Cardigan" video, she acted as her own hair and makeup artist.

Before releasing the video at midnight, Swift had shared the sneak peek on her Instagram.The still image had Swift peering into what appeared to be a case filled with light, and her hair was pulled back into a braided style that mirrors her look for the album's cover. "The entire shoot was overseen by a medical inspector, everyone wore masks, stayed away from each other, and I even did my own hair, makeup, and styling," she wrote.

The video sees Swift in a mythical forest common in traditional folklore, offering a closer look at the ethereal beauty she created herself. While her makeup was fairly simple — brushed up brows and rosy, popsicle-stained lips — her hair remained in two loose, surprisingly intricate braided buns sitting at the nape of her neck, with wispy bangs falling over her brows and ears.

Watch the full Taylor Swift "Cardigan "video below, and get ready to see an uptick of braided hairstyles all over your Instagram feed for the rest of the summer.