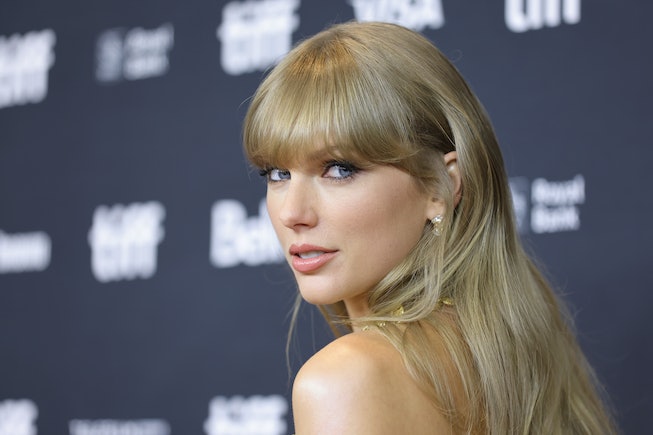 When Taylor Swift first burst onto the scene in 2006 with the release of her self-titled debut album, she quickly became known for her country western fashion sense and long, blonde hair, just as much as for her confessional song lyrics. At the time, in the mid-aughts, Taylor wore her hair in a very of-the-time deeply side-parted style with pageant-y curls and swooping bangs. In Taylor’s 15+ years on the scene, she’s had many eras, but has since adopted the blunt bangs and trending middle part combo. Recently, she must have been feeling nostalgic for her 2000s “Our Song” era, however, because the singer gave us a blast from the past with major side bangs at the 2022 American Music Awards.

The 2022 AMAs took place on November 20 at Microsoft Theater in Los Angeles, where Taylor took home the awards for Favorite Pop Album, Favorite Female Pop Artist, Favorite Music Video, Favorite Country Album, Favorite Female Country Artist, and Artist of the Year. She won every category she was nominated for, increasing her AMA count to 40, making her the most decorated artist in the awards history. For the event, she wore her full bangs clipped to the side and her hair in bouncy curls also parted to the side. We couldn’t help but notice that Taylor’s new look feels strikingly similar to her signature style from her early red carpet days. Her gold, rhinestone-encrusted halter jumpsuit from The Blonds also appears to be a nod to the Reem Acra dress she wore to the AMAs 11 years ago, in 2011.

Taylor may have skipped the AMAs red carpet but she brought all of the drama onstage with her look, wearing bright red lipstick to complement her golden outfit. When accepting her award for artist of the year, Taylor thanked her fans for “her happiness”. "In the past few years, I have released more music than I did in the entire decade proceeding that," she says, noting that her fans encouraged her to do so. "The more music I made and the more music I put out, the happier I was."

There’s no denying that Taylor’s personal style and artistic style have changed and developed as her career did over the past decade. No longer known as a country artist exclusively, the singer is a pop star in her own right with an entirely new look. However, it’s refreshing to see that the old Taylor can in fact come to the phone right now and that she’s not “dead” as her iconic song, “Look What You Made Me Do” suggested.