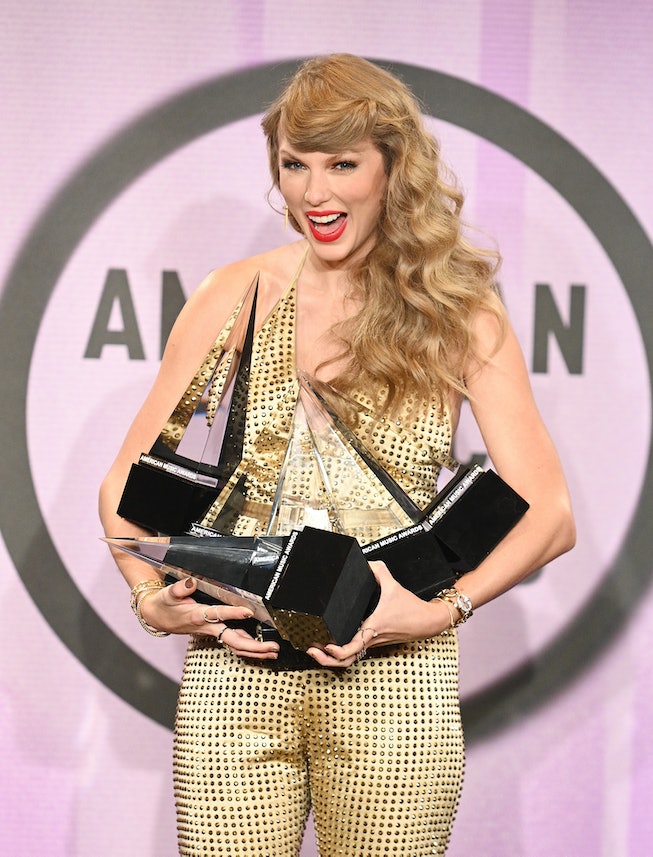 Taylor Swift may not be having good luck in the touring arena at the moment, but her awards show success is unbroken. The singer smashed her own record to remain the most decorated American Music Award winner of all time. Swift took home all six awards she was up for during the Sunday, Nov. 20 ceremony, including Artist of the Year. Swift now has 40 AMA wins under her belt, the most of any artist in the show’s history.

Wearing a shimmery gold jumpsuit with her wavy bangs swept to the side a la her “Our Song” era, Swift thanked her fans in a touching acceptance speech for Artist of the Year, saying that they gave her the encouragement to release the most music she ever has over the last few years.

“You, the fans, made it clear that you wanted to hear lots of music that I would make. You encouraged me. And so I found that the more music that I made, the more music that I put out, the happier I was. The more i just kept that channel open and just kept creating, kept making things,” Swift said. “So I have the fans to thank, essentially, for my happiness, and I love you more than I can say.”

It’s been a year of wins for the singer who also experienced a bountiful 2022 VMAs, taking home three trophies for All Too Well: The Short Film, including top prize Video of the Year.

Swift will be up for more awards at the forthcoming 2023 Grammys scheduled to take place on Feb. 5, 2023, and whose nominations were announced last week. Swift’s All Too Well: The Short Film will be up for Song of the Year and Best Music Video, while Swift’s “Carolina,” from Where the Crawdads Sing, is up for Best Song Written For Visual Media, and “I Bet You Think About Me (Taylor’s Version) (From The Vault)” is up for Best Country Song.