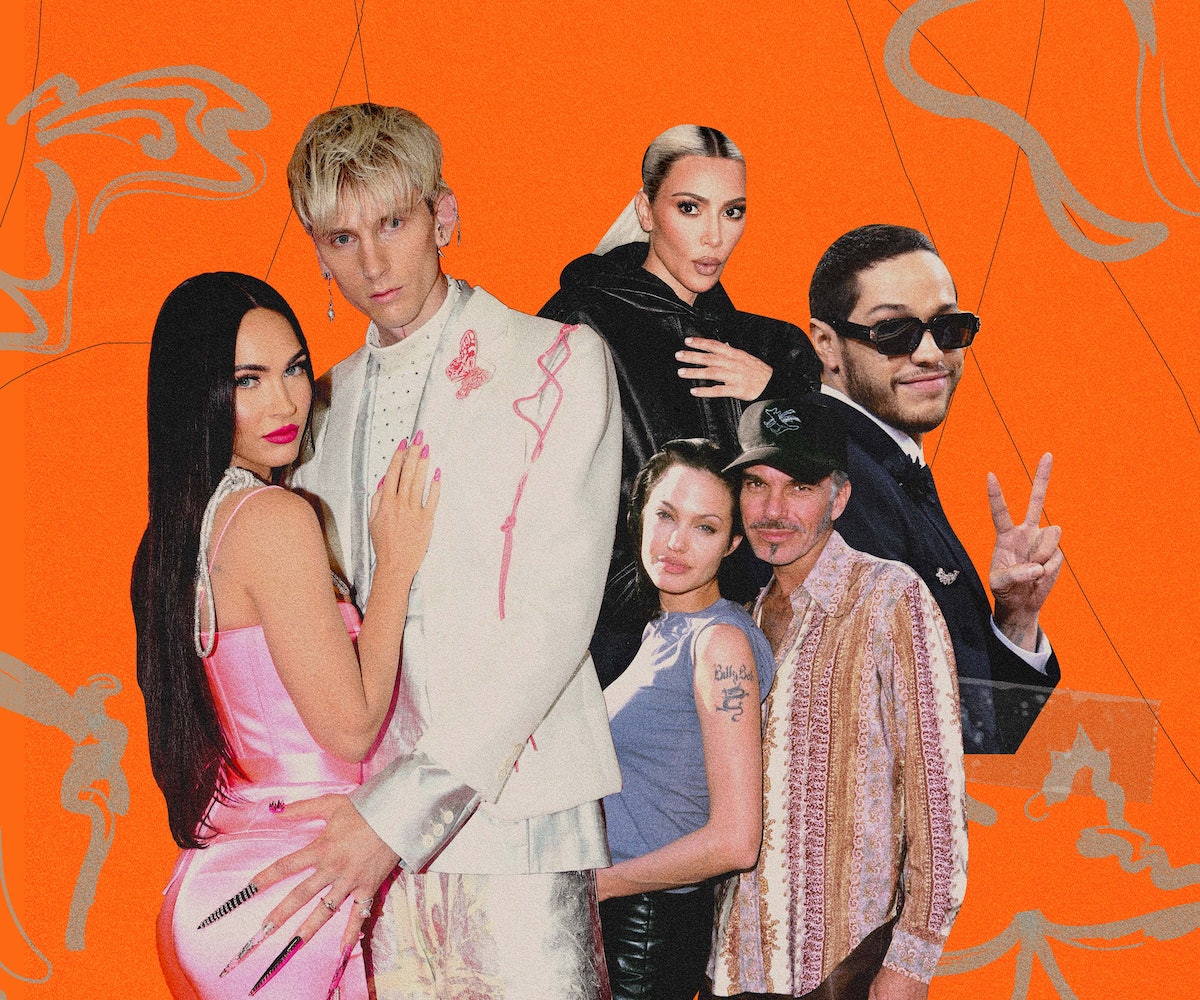 In the 2000s—the heyday of chaotic celebrity romances—Angelina Jolie and Billie Bob Thornton set the tone for a decade of passionate, scream-it-from-the- rooftops love affairs. They wore necklaces containing each other’s blood and had a speedy Las Vegas wedding— that actually occurred while Thornton was still technically engaged to Laura Dern. In a very of-the-moment gesture, Angelina even got his name tattooed on her upper arm over a dragon. Memories may last a lifetime, but the tattoo did not. Post-divorce, in 2003 she had it removed (and later had the coordinates of her children’s birthplaces inked in the same spot).

Today’s Y2K revival has brought back a similar outlandishly romantic spirit among celebrity couples. Megan Fox and MGK have openly spoken about drinking each other’s blood and Kourtney Kardashian and Travis Barker have embraced tongue-heavy make outs on red carpets everywhere. It seems tumultuous and extremely public romanticism is back— and it has also ushered in the return of the cringe couple tattoo.

In March 2022, Pete Davidson was spotted with Kim’s name branded into his chest as a testament to their new love. Since then, he has gotten three more public tattoos in her honor, including “my girl is a lawyer” and the initials of her four children, something he may now be regretting—or not—since their breakup was announced Previously, during his whirlwind romance with Ariana Grande, Davidson and the singer got matching cloud tattoos (among several other Ariana-themed tattoos), which he then covered up after their split. Some other celebrity couples are still together and proudly wearing their ink, like MGK and Megan Fox, who jumped on the matching tattoo bandwagon with identical voodoo doll tattoos the showed off in a carousel post on MGK’s Instagram earlier this year.

Obviously, couple’s tattoos are nothing new. UK-based clinical sexologist and therapist, Ness Cooper explains that couples have long used tattoos to mark milestones and as a bonding experience. Other celebrity duos have done it as well, like John Legend and Chrissy Tegan who got “family tattoos” in 2019 and Kylie Jenner and Travis Scott who revealed matching butterfly tattoos in 2018. However, it seems like celebrity couples are ratcheting up the number of dedicated tattoos and fast-tracking the process, with Davidson as a notable lead.

Cooper recommends against this practice during the “honeymoon stage” of a relationship. “During the different stages of a relationship, some people may be more likely to get a tattoo together,” she says. “Especially if they are still in the obsessive stage and they feel everything should be joint.” Her advice: “It’s important to wait until individuals within the relationship can see their individual reasons why getting the tattoo is important to them and not just the joint reasons.” This, says Cooper, helps to avoid post-breakup tattoo regret.

Of course, people are going to do what they’re going to do. Cooper says that the current fixation on “branding” new relationships may be in part due to lockdowns limiting people’s own access to romance—making everyone want to hold on tighter to what they’ve got. When it comes to celebrities, “The information shared in the media around celebrity romances allows us to feel like part of the relationship dynamic,” Cooper says, “it may make us unconsciously connect with the relational developmental stages.” So really, what they’re doing is just helping let us in.

While many couple’s tattoos inevitably end up covered up (or removed), tattoo artist Hannah Byrne considers them “funny and pretty harmless.” “Celebrities probably have the money to remove or cover them if they want to in the future, so why not?” they say. However, this isn’t the case for everyone, which might be why Byrne finds these tattoos aren’t a common request.

Rachel Wright, a licensed marriage and family therapist and founder of Shame Free Therapy, says our favorite celebrity couples tattoos may be a sign of a further revolt against old school romantic traditions. “Rings are the old school standard of showing your commitment to someone, but it has roots in ownership and anti-feminism,” Wright explains. She says, recently, “many have shied away from the traditional ‘I give you a diamond, you give me your daughter,’ model and have decided to make their own decisions,” she says. Tattoos are visceral, (mostly) permanent, and in the case of couples tattoos—mutual. “We like to show off our relationships to people—a ring is a form, and tattoos and nail art are just two other forms.”

As for why we can’t look away from the car crash that is chaotic celebrity relationships (and the tattoos that bind them together), Wright says it’s a voyeuristic distraction. “It’s partially the same reason why we love shows like The Bachelor,” she says. We think to ourselves, ‘wow, that’s a lot of drama’, comparatively, our lives seems pretty normal.” Furthermore because we don’t know what relationships are “supposed” to look like, Wright says we often seek out different models and “enjoy watching things we wouldn’t necessarily partake in for ourselves”. Those models may or may not involve drinking blood.

For those looking to jump on the cringe tattoo train, Wright wants to remind us all that all relationships (romantic, platonic, sexual, and familial) can eventually break up. “Make sure whatever you’re getting is something you still like, because regardless of your relationship status with that person, it’s still going to be on your body,” she says. This could look more similar to a nod to a shared interest than a name, although Byrne says lettering is an easy coverup. “I think tattoos with a story are cool, and blastovers (a new tattoo on top of old tattoo that doesn’t fully cover it up) are even cooler,” they say.

Celebrities have always been in the business of entertaining us and branded couple tattoos are just another way to give us something novel to talk about. Their meteoric and chaotic return, however, ushers in a new era of over-the-top celebrity couples—eager to one-up each other in an increasingly over-crowded fame landscape. Love them or hate them, the cringe couple is back and we should expect to see more matching ink. Only a few, however, will go down in chaotic couple history and join the ranks of Angelina Jolie and Billie Bob Thornton and their vials of blood.