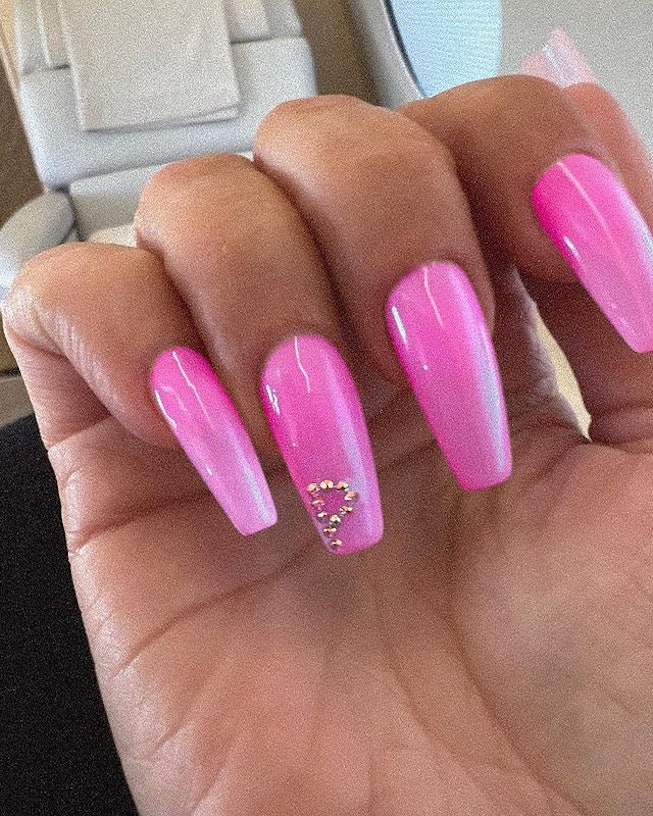 Earlier this summer, Kim Kardashian made her relationship with boyfriend Pete Davidson “nail art official” when she posted a hot pink manicure with a rhinestone letter “P” to her Instagram grid. But that sparkly little “P” was just a small part of a new wave of romantic tributes via manicures. Other celebrity couples like Megan Fox and MGK have been showing up to events with coordinated nail looks for months, once even with their pinkies linked by chain. Kourtney Kardashian and Travis Barker both painted each other’s initials on their thumbs in a black gothic font for the Met Gala. But who says committed couples should have all of the fun? Well, one viral TikTok says you get the initials of your “entire roster.”

This TikTok, shows a creator who is eager to get in on the romantic manicure trend getting her nails done at a salon. On top of a classic french manicure with square tips, she got multiple initials in black polish on the corner of her nails. Dedicating her manicure to at least five people in her dating roster, she captioned the video “Love all my stinks.” “When you are single so you get your entire roster's initials instead,” she wrote over the video. She also tagged the nail tech, a Philadelphia-based nail artist Lexi Maria (aka @nailtechno5).

While the new “roster manicure” isn’t for the faint of heart (or the private), it does provide a viable alternative for single people to take part in this ongoing couple’s manicure trend. After all, unlike tattoos, nail art can easily be removed and usually only lasts a few weeks—much like casual dating. With very little commitment and the help of a nail tech, you can be sure your romantic partners are aware they’re not the only person you’re dating.

With nail art steadily trending and initial manicures only gaining steam and getting more creative there are endless possibilities to what comes next. While “roster manicures” might not take off, but dedicated friendship (or situationship) manicures may be on the near horizon. As for celebrity couples, it’s clear Kim’s rhinestone “P” was only the beginning. Bring on the romantic nail art drama.