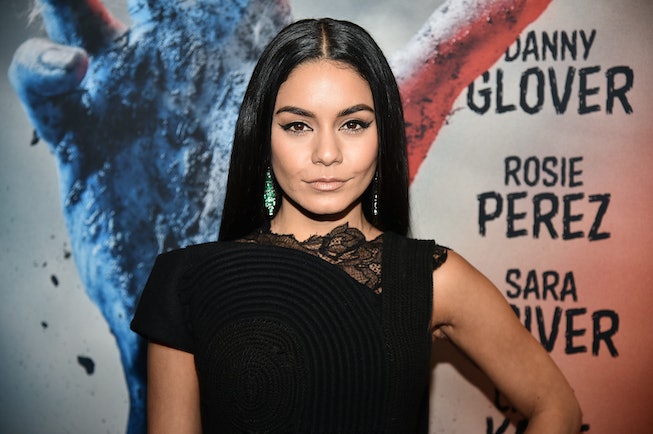 Vanessa Hudgens is back in the salon, and debuted another monumental new haircut. Nearly one month after chopping off much of her waist-length hair, Hudgens has undergone another hair transformation, and revealed her newest, even shorter style.

Hudgens commemorated the conclusion of filming on Tick Tick...BOOM!, a Netflix film adaptation of the musical, directed by Lin-Manuel Miranda, with a haircut from the film's stylist. "@mflyons did hair on Tick Tick Boom and we worked together on Second Act as well. When I wrapped on that she gave me a chop. And now that I wrapped on this, she gave me chop," she wrote.

Dubbing the haircut as "kind of a tradition" between the two, Hudgens posed for a few Instagram selfies with her short hair. The length of her lob brings her hair to her shoulders, and the style was fashioned with a deep side part. For the ends of her hair, Hudgens appeared to wear some curled in, while others were straight.

The length is quite a departure from the star's previous style. Back in March, her hair was long, and past her shoulders, and at the time, she was embracing her natural curls. Although her current cut is more straight, Hudgens had recently favored her voluminous curls, and her previous cut highlighted a straight style.

It's been nearly three years since Hudgens last debuted a cut this short. For quite some time, she's chosen longer hair, but previously, she embraced the versatility of her shorter hair, hitting the red carpet with looks that included sleek and styled back, as well as a curly cut that was parted right down the middle

Let the star inspire you to go short with a selfie of her chop, below.