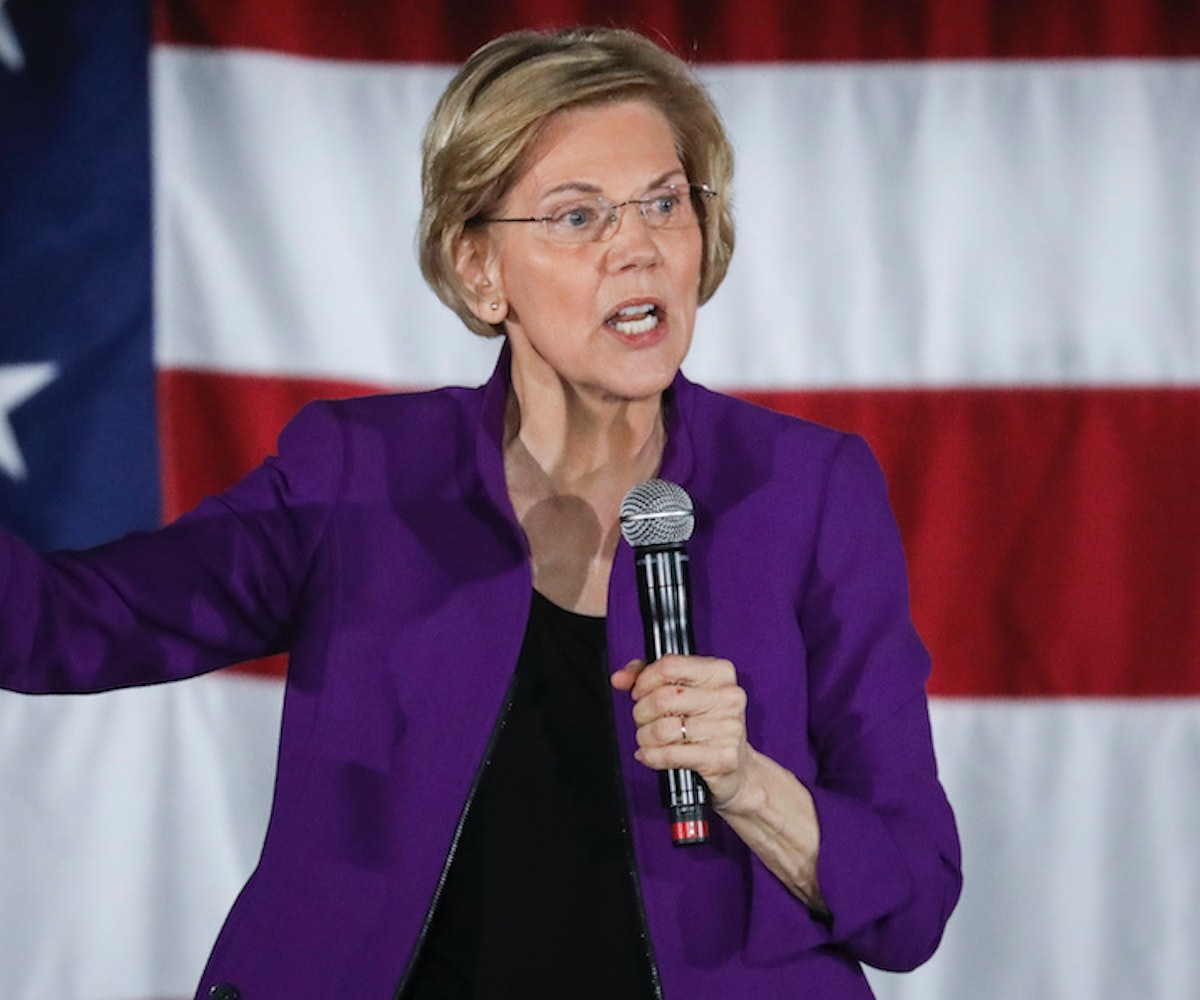 Last night, 2020 presidential candidate Elizabeth Warren participated in a CNN Town Hall and made clear her positions on contentious issues like abolishing the Electoral College, reparations, immigration reform, and more. Her appearance made clear that she is a true progressive, willing to talk about uncomfortable truths in the service of a platform that will help all Americans—particularly those whose needs are often ignored.

When asked how she'd "expand voting rights to the formerly incarcerated, ensure online voter registration and no-excuse early voting," which would offer drastic improvements in voting rights and opportunities to marginalized communities, Warren stated that she knows we need a constitutional amendment in order to do so, acknowledging that it would be difficult, but further proved she's not afraid of a fight when she called for the abolition of the Electoral College, because "every vote matters." This archaic institution, after all, is the reason why, in the last five presidential elections, the Democratic candidate has won the popular vote four times, but only become president twice.

Warren handled a question about how she'd handle an "influx of migrants," by turning it into a discussion of the U.S.'s foundation being built on immigration, and explained why we need to find strength in our differences. She called out the current border crisis, in which children have been ripped away from their families, as being an example of how our current immigration policies are clearly failing, saying, "An immigration system that is administered so that it is not able to tell the difference between a criminal, a terrorist, and a 12-year-old little girl is an immigration system that not only is not keeping us safer, it does not reflect our values."

Warren also discussed her support of a national conversation about reparations, answering a question about how her administration would "publicly apologize" for slavery, and called out the bill currently in Congress that proposes opening up a congressional commission on the issue. When prompted by the CNN moderator, though, Warren did not go so far as to commit to future direct monetary payments, but instead left the question open, and cited her desire for more experts to weigh in on potential options.

Warren confronted one of our most serious security threats head-on: the need to treat white supremacists as the terrorists they are, "like ISIS, like al Qaeda," and assuring that her Justice department would go after white nationalists with the fullest extent of the law. She also commented on the need for gun reform later on, saying, "Right now the federal government is held hostage by the NRA."

It was a performance that was truly inspiring, and while it might not be enough to erase the memory of last fall's DNA test fiasco that had Warren playing directly into Trump's hands, it certainly went a long way to doing just that—and to reminding voters that it's the policies that matter, not how much you like to re-enact Coyote Ugly.

NEXT UP
Beauty
September 2022’s Best Beauty Launches Will Keep You Cozy And Cute Throughout The Fall
Life
On Repeat: Vaquera’s Away Collaboration Is Brought To You By Britney Spears B-Sides
Life
Away’s Second Designer Collection Will Have You Traveling In Style
Life
The White Lotus Season 2 Trailer: Italian Sleaze, Vespas, & Scandal