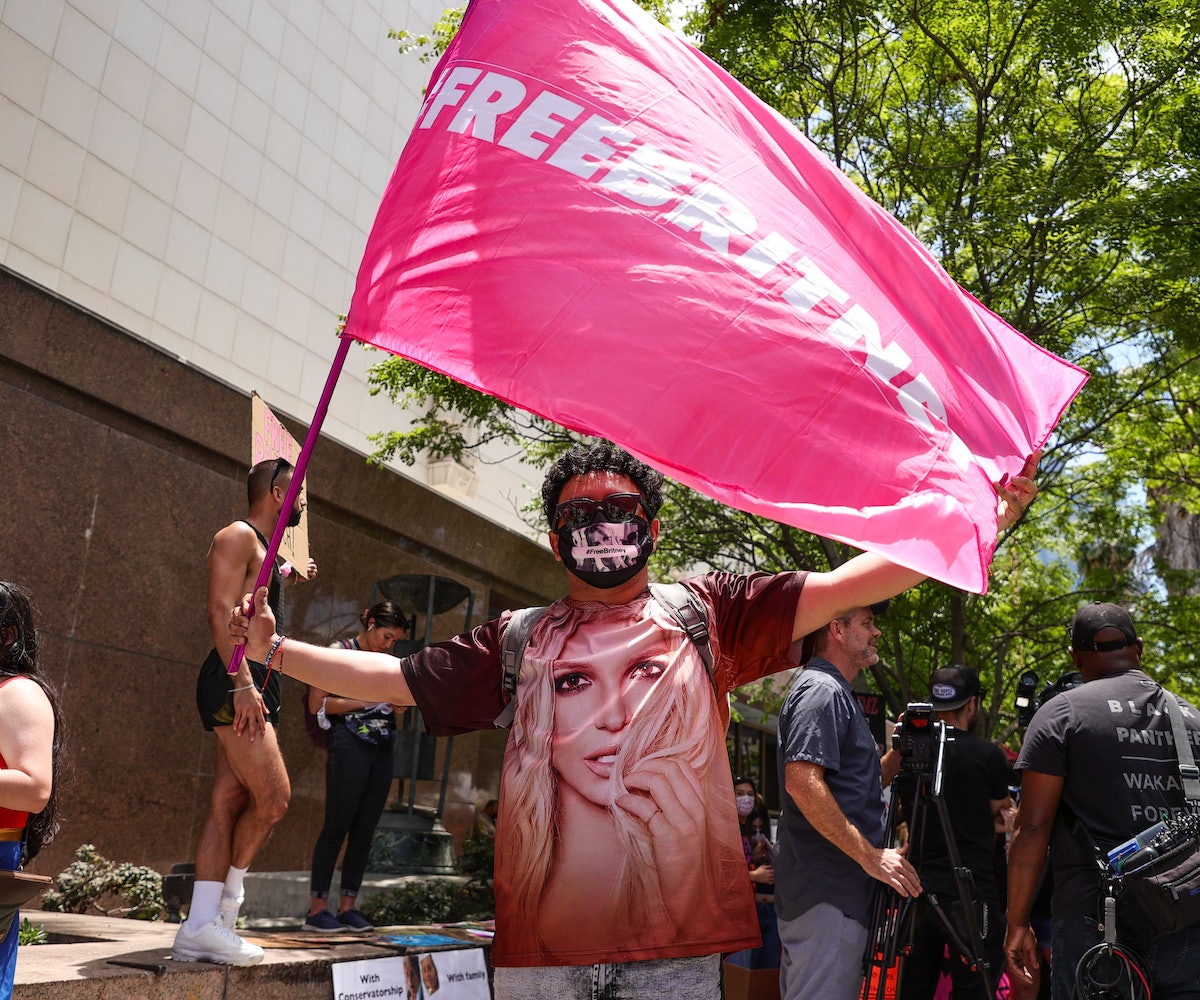 #FreeBritney is coming to a radio station near you. Just in time to coincide with the pop star’s next court hearing, a ‘Free Britney Radio’ pop-up station will be taking over various stations’ airwaves across America come Wednesday, July 14, 2021. Stations from more than 75 markets — from San Francisco to Chicago to Atlanta — are expected to participate in the pop-up “day of solidarity,” as it’s being described by organizer 98 Degrees boy band member Jeff Timmons and audio production company Benztown.

Throughout the day on Wednesday, listeners will be able to hear all of Spears’ greatest hits, as well as messages of support from celebrities, covers, live messages from fans and reporters at the Los Angeles courthouse, and an interview Timmons will be conducting with lawyer and conservatorship expert Lisa MacCarley about the details of Spears’ conservatorship.

The R&B boyband member and father of five put together the event after feeling spurred on by his friendship with Spears, as well as his own “fucked up” experience battling the California court system, according to an interview with Variety. He also believes that Spears was never in need of a conservatorship in the first place.

“The media showed Britney falling off the rails, but that was salacious,” Timmons told Variety. “In this business, everybody goes through ups and downs. It’s a rollercoaster and things become surreal. At certain points, it all piles up and you reach a breaking point, but that’s just human existence. Anybody in her circumstances would’ve had a meltdown. Physiologically, alone, it was probably exhausting.

Timmons and Spears first met in the late ‘90s when Spears and 98 Degrees co-headlined concerts together. Speaking to Variety, Timmons remembered the pop star during that time as being “sweet, quiet, polite, [and] soft-spoken,” but would “get on stage and just rock it.”

“Britney was always working, performing, being gracious to fans,” he added. “When someone’s busy and successful, they start collecting more people on their team and if you’re not paying attention, you collect folks who might not be looking out for your best interests.”

Spears’ July 14 court hearing — the first following her explosive June 23 testimony — will be an important one. Though Spears is not expected to speak and the hearing has largely been closed to the public, the session is likely to address the recent resignations put forth by her court appointed lawyer Sam Ingham, and Bessemer Trust, the investment firm that was expected to come on as co-conservator of Spears’ finances alongside father Jamie Spears. Notably, no petitions to terminate the conservatorship, nor to remove Jamie Spears, both things requested specifically by Spears during her testimony, have yet been filed.

However, according to the New York Times, a prominent Hollywood lawyer, Mathew Rosengar, is expected to attend the hearing and make the case to represent Spears.

“We think Free Britney Day and the nationwide ‘Free Britney Radio’ blitz on July 14th will show our collective appreciation for all that Britney Spears has done for music and for radio over the years, through her tremendous talent and contributions to our medium,” wrote Dave Denes, the President of Benztown in a press statement. “The more stations across the U.S. that join the #FreeBritney movement and re-brand as ‘Free Britney Radio’ for this one important day for Britney, the bigger impact we will have in making her voice heard.”

Check out Benztown’s website for more info on ‘Free Britney Radio’ and to see if your local station is participating.