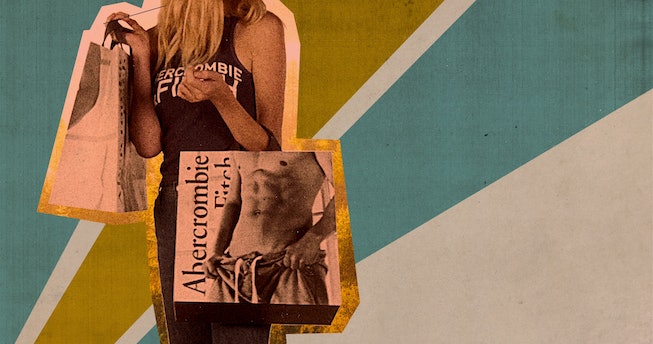 Amid the cultural chaos of the past decade, one theme has remained steady: the fall of previously untouchable institutions. From government to the social hierarchies that defined us, seemingly no stone has been left unturned as social media has given an unprecedented platform to the formerly voiceless and woken people up to the realities around them.

In 1999, when one-hit wonder boyband LFO released their ridiculously catchy song “Summer Girls,” the line about liking “girls that wear Abercrombie & Fitch” seemed to indicate that the teen-focused retailer was one such impenetrable institution, whose cool-factor had reached such heights that as one person put it in Netflix’s new documentary, White Hot: The Rise and Fall of Abercrombie & Fitch, you could write the A&F logo in “dog shit on a hat and sell it for $40.”

The infamous brand, known as much for its blaring music, assaultive perfume and near-nude teen models, is under scrutiny in the new documentary, directed and produced by Alison Klayman (Jagged). As the title promises, what goes up must inevitably come down, and as much as A&F once dominated teen culture, it’s now become a symbol of everything Gen Z hates.

The 88-minute film gives a swift but thorough look into the company’s origins — from its beginnings in 1892 as a hyper-masculine sportsman-styled store that sold to white male icons like Teddy Roosevelt and Ernest Hemingway — its racist hiring practices, which have been deemed illegal several times, its homoerotic undertones despite being marketed as heterosexual heaven, and its financial boon followed by its eventual downfall. (Though the store is still in business today, and is currently undergoing a body positive, inclusive rebrand, it has nowhere near the cultural ubiquity it once did).

Once the disgraced Les Wexner is introduced as the man who would, along with former CEO Mike Jeffries, rebrand the company into a cross between Calvin Klein (sexy) and Ralph Lauren (preppy), one can see where the doc is headed.

Below, some of the more shocking revelations from the doc:

This topic is the focus — and rightfully so — of much of the documentary. A&F was notorious for recruiting, as explicitly stated by the company, “good-looking” young people to “work” in their stores. Except, often in practice, there were tiers of workers, with those who fit the Abercrombie “all-American” look (read: white) working as models (remember the shirtless guys flanking either side of the store?) and everyone else working nights or in the back stockrooms.

The company was sued more than once for these practices, including an instance where a young woman was denied a job in 2015 over her headscarf, which made it all the way to the Supreme Court (the court ruled against A&F in an 8-1 decision). As one person in the doc put it, “[Discrimination] was their brand. It was their identity. They rooted themselves in discrimination at every level.”

Several people who were part of a class action lawsuit were interviewed, including one man, Anthony Ocampo, who was told his hours were getting cut because the store he worked at already had “too many Filipinos.” Ocampo said of deciding to join the lawsuit, “Here was an opportunity to call Abercrombie on their bullshit of trying to say they’re an ‘all-American brand,’ and yet the way they’re maintaining this image of all-American is to hire a bunch of white folks and fire a bunch of people of color.”

Incidentally, it was actually difficult to find people to join the lawsuit at all, because so few people of color worked for the retailer.

The doc also shows the brand’s dress code guidelines for store employees, which clearly served as vaguely disguised ways of only hiring white people. One description of an acceptable employee featured a photo of a white teen captioned: “A neatly combed, attractive, natural, classic hairstyle is acceptable.” His “unacceptable” counterpart was a photo of a Black teen, captioned, “Dreadlocks are unacceptable for men and women.”

Another major focus of the doc is an incident that first put a dent into Abercrombie’s brand. Several of their graphic tees, which former employees describe as intending to be humorous and “irreverent,” featured racist caricatures of Asians advertising fake laundry services with phrases like, “Two Wongs can make it white.” The shirts resulted in Asian American student groups protesting the store — and while A&F removed the shirts, they didn’t immediately stop putting out more racist tees, like another one with a picture of a donkey wearing a sombrero and the phrase, “Juan more for the road.”

Fashion photographer Weber was a perfect fit for Abercrombie. With Jeffries, he crafted an image of young, nude people frolicking in natural settings, creating a sort of naturalistic ideal of (white) youth that was then used to sell the clothes. Weber has since been outed as an alleged sexual predator of young models, though he had denied all wrongdoing. In the doc, a former model describes being immediately fired upon refusing to have dinner privately at Weber’s home.

Ultimately, White Hot shows that Abercrombie was a product of its environment.

As one journalist interviewed puts it, “Abercrombie is illustrative more than it is exceptional. They didn’t invent evil. They didn’t invent class. They just packaged it.” The brand may have had a massive influence on the culture, but it was also indicative of what was popular in the post-Reagan, pre-internet era. It’s no coincidence that the brand fell nearly in tandem with the rise of the internet. Many who grew up during Abercrombie’s heyday, will remember that the racist, sexist, fatphobic, homophobic and ableist (and so on and so forth) ideals celebrated by Abercrombie were hardly exclusive to the brand. There’s always been a strain of American culture that celebrates the exclusion of most to the benefit of a few. Abercrombie may have finally realized there’s more money to be made in not excluding 90% of its potential consumer base, but it doesn’t mean those ideals have been eradicated from fashion, or the culture at large.