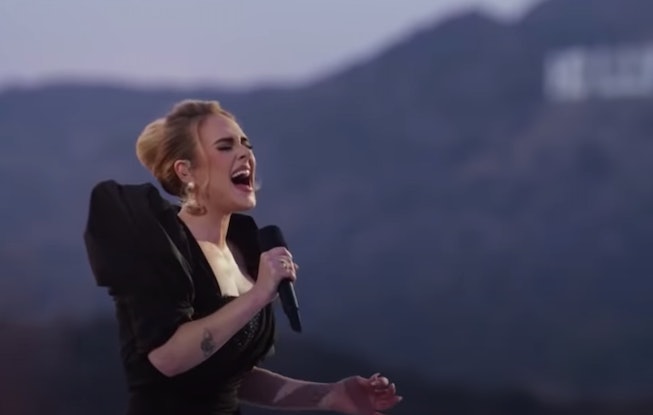 Last night, CBS aired Adele’s One Night Only special, which luckily for fans is available to stream online in its entirety. The special included a recording of a live concert Adele performed of her new album, 30, at the Los Angeles Griffith Observatory, to a crowd of A-list celebrities that included Gabrielle Union, Seth Rogen, Lizzo, Melissa McCarthy, Selena Gomez, Gordon Ramsey, Drake and many more. (There was also a surprise proposal that Adele helped with).

In addition to the performance, Adele sat down for an interview with Oprah, with whom she discussed divorce, her album, and the public scrutiny she’s always experienced over her weight.

"It's not my job to validate how people feel about their bodies,” she told Oprah about people’s reaction to her recent 100-pound weight loss, that she credits with working out and quitting drinking to deal with the anxiety caused by her divorce. “I feel bad that it's made anyone feel horrible about themselves — but that's not my job. I'm trying to sort my own life out. I can't add another worry."

Below, watch Adele’s One Night Only concert and head here for her interview with Oprah:

If you’re anything like me, you’re probably still crying to “Easy On Me,” the lead single off Adele’s fourth studio album, 30. The piano ballad is typically Adele, a big sweeping tearjerker about big sweeping emotions, guided along by the singer’s one-in-a-million voice. It’s a great introduction to the forthcoming album, which we should all be happy to know is coming out in exactly a month. But if November 19th seems too far away, have no fear — Adele will preview the album with a televised concert and an exclusive Oprah interview the week before.

Titled Adele One Night Only, the two-hour concert special will be “be the earliest opportunity for most of the world to hear the singer’s first new material in six years,” according to Variety. The highly-anticipated event will air on CBS at 8:30pm ET on Sunday, November 14. It will also be available to stream live and on demand on the Paramount+ streaming platform.

Filmed in Los Angeles, the concert section of the special will feature a combination of new songs from 30 and a selection of the singer’s biggest hits from past albums like 19, 21, and 25. The interview portion, meanwhile, will film in Oprah’s famous rose garden (notably seen in the Emmy-winning talk show host’s secrets-revealing interview with Meghan Markle and Prince Harry). Billed as the singer’s “first televised wide-ranging conversation about her new album,” the exclusive interview will feature discussions about “the stories behind the songs, life after divorce, weight loss, and raising her son.”

Based on a personal note Adele shared alongside the 30 album cover, this conversation is destined to reveal some rather painful truths about Adele’s recent past. In the ultimately uplifting note, Adele described her recording process as “a maze of absolute mess and inner turmoil.” Though she admits that she now has “never felt more peaceful in [her] life,” she admitted that 30 was created during “the most turbulent period of [her] life.” Knowing how skilled Oprah is at getting celebrities to open up about the most personal aspects of their lives — again, look no further than the interview with the Royal Couple — it’s easy to predict that the singer will be expanding more about everything that led her to where she is now.

Admittedly, all I want to know is when I can expect the Peppa Pig collab to drop.

Adele One Night Only airs on CBS and Paramount+ at 8:30pm ET on Sunday, November 14.