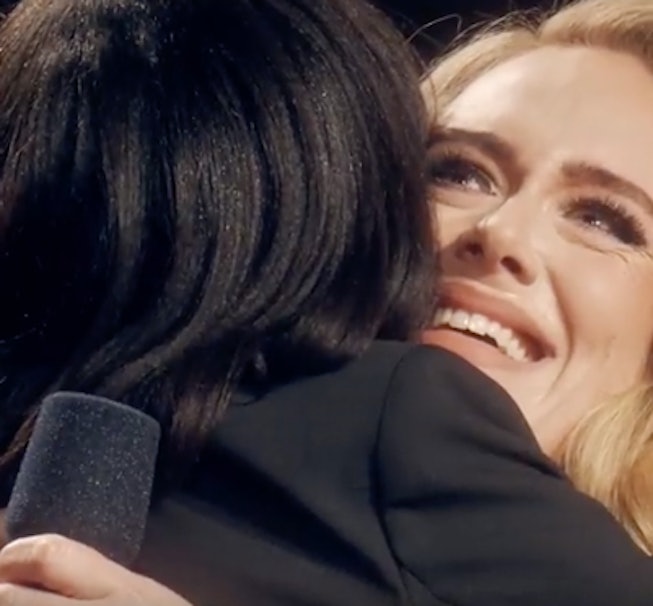 Last week, Adele dropped her new album 30 and reminded us all that Sad Girl Fall is fully in session. The 12-track record — which details the singers’ divorce to Simon Konecki — is full of poetic lyrics, and now we know how Adele learned to write them. Last night, during a televised-concert, she attributed her success to her grade-school english teacher, not knowing the woman was sitting amongst the crowd.

Adele was in the middle of the evening's Q&A portion, when audience member Emma Thompson, of all people, asked who fostered her interests as a child. “When you were younger was there someone who kind of supported you, or, sort of, you know, inspired you, or, sort of, protected you from all the trials and tribulations of life, and inspired you to go on?” the British actress asked. Adele answered almost immediately. “Yeah, I had a teacher at Chestnut Grove who taught me English,” she said. “That was Miss McDonald.”

The singer went on to explain that McDonald was, “so bloody cool.” “She really made us care and we knew that she cared about us,” Adele continued. “She used to have all these gold bracelets on and gold, like, sequins. I dunno, she was just bloody cool, and so relatable and likable that I really looked forward to my English lessons.”

As it turns out Adele and her teacher did not keep in touch, but Adele said that her influence stuck long after she left her classroom. “It was just one year but she was like, she really got me into literature,” she explained. “I’ve always been obsessed with English and, obviously now I write lyrics.”

At that moment the chords from “Make You Feel My Love,” began to play as Adele was notified that Ms. McDonald was there. The teacher then approached the stage, surprising the singer, who cried as soon as she saw her. “You look exactly the same,” Adele said. “Thank you for remembering me,” McDonald responded.

The two briefly caught up before Adele noticed she’d cried off some of her makeup. After agreeing to exchange numbers, the singer exited the stage for a touchup, and asked her friend Alan to fill in. He dutifully hopped on stage and amused the audience with an off-key performance, before Adele returned to finish the show.